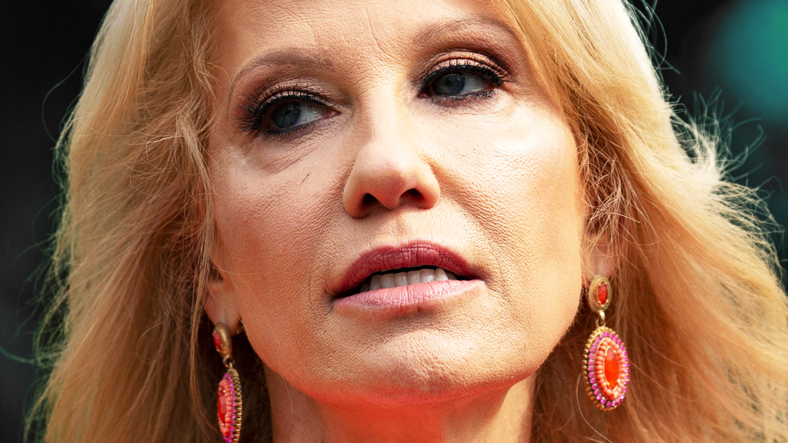 The Conway family has been rocked in recent months by internal turbulence and now their daughter Claudia is adding fuel to the fire. A political powerhouse, Kellyanne Conway and her husband George are both outspoken for their respective political sides.

Kellyanne has worked for President Donald J Trump as an advisor and frequently stumps for him on TV. Husband George is an outspoken critic of the president who uses Twitter to blast Trump while neatly avoiding direct confrontation with his wife, at least in public.

It appears that the dissension among the Conway ranks isn’t relegated solely to husband and wife. Daughter Claudia, 15 years old and one of four children, has in recent months, shown herself to also be an outspoken critic of Trump, using her growing TikTok and Twitter followings to speak out. Conway has also leveled accusations at both her parents and the media over the past several months.

Claudia Conway’s high profile spat with the media began with a tweet that said, “TO ALL JOURNALISTS/REPORTERS/ANYONE IN THE MEDIA; DO NOT USE MY TRAUMA AS A MEANS FOR PUBLICITY OR PROFIT. IT’S SICKENING. I AM 15 YEARS OLD. EXPLOITING A MINOR PUBLICLY IS DISGUSTING.”

The trauma she refers to appears to be a connection to the allegations she has leveled against her mom. Conway spoke out on TikTok, saying she was arrested for allegedly making false statements about her mother, and she accused her mom of physical and emotional abuse.

The new allegations Conway makes claim that her mom is threatening to have her allegedly arrested again.

In a video posted in August, the teen recapped her year, “2020 so far,” saying that there have been, “non-stop CPS investigations because (her) parents are abusive and mom got [her] arrested.”

Not A Good Look

It’s not a good look for a well-known public figure like Kellyanne Conway to be fighting this battle so publicly, but Claudia seems unlikely to let up any time soon.

She re-tweeted a tweet that said, “Claudia Conway just went live on TikTok and talked about how her mother has physically and emotionally abused her for years and had her arrested for fake assault charges a few weeks ago…..someone get this girl emancipated STAT.”

Not all of Conway’s accusations directly involve her mother’s abuse. In another video she uploaded to TikTok, the teenager says, “she felt like she was being sexually harassed by an authority figure at boarding school and that he came into her room, ‘every night.’ she claims her mom dismissed the allegations as him, ‘just looking out for [her] when Conway” brought it to her mother’s attention.

Conway has not appreciated many people’s response to her accusations online. While the TikTok user has aimed much of her ire at the media and her mother, the 15-year-old also has words for people who criticize her portrayal of her mom online, saying in one TikTok video, “Can you all stop telling me how to live my life and portray my mother? I respect her to the extent she deserves. The woman got me ARE$TED. Ruined my life. I’m doing what I can. Mind your business.”

A Family In Crisis

The whole affair speaks of a family in crisis. Whether the allegations are true or not, it seems as though the teenager feels unsupported and unheard. As Conway takes her accusations against her mother public, it’s forcing Kellyanne into a difficult stance. By refusing to address the accusations, the president’s advisor is allowing speculation to grow rapidly.

By addressing them, it offers her daughter’s behavior validity and legitimacy Kellyanne desperately hopes to avoid.

Take The Phone Away

In mid-july, Kellyanne attempted to take her daughter’s phone away in the middle of Conway’s live streaming on TikTok. Conway had previously live-streamed a confrontation with her mother, and the teen expected that her social media would be suspended after that.

Could This Be The End of Kellyanne Conway?

The president’s administration has been beset by accusations of both public and private misconduct and criminal behavior, and the turnover rate among his employees has been record-breakingly high. Kellyanne has outlasted all of them. After so much trouble with the Conways, Trump will have to decide if having her on the team is worth the bad publicity or not.

This is not Kellyanne’s first public accusation of misconduct. She has repeatedly been accused of violating the Hatch Act, which prohibits federal employees from engaging in political activities while they are on the job.

According to CBS News, “A federal watchdog has recommended that President Trump remove White House counselor Kellyanne Conway, one of his top advisers, from federal service due to her repeat violations of the Hatch Act, which prohibits government employees from making political statements while acting in an official capacity.

The Office of the Special Counsel- the ethics office for the White House, which is unrelated to former special counsel Robert Mueller- sent a report to the president Thursday finding that Conway had violated the act ‘on numerous occasions’ by criticizing Democratic presidential candidates in TV interviews and on social media. While the president and vice president are exempt from the Hatch Act, that privilege does not extend to federal employees.

‘Ms. Conway’s violations, if left unpunished, would send a message to all federal employees that they need not abide by the Hatch Act’s restrictions. Her actions thus erode the principal foundation of our democratic system — the rule of law,’ the OSC said in the letter to Mr. Trump, calling Conway a ‘repeat offender.’”

What Will Happen Next?

Claudia Conway seems unlikely to stop speaking up any time soon. The teen has been taking direct shots at both her mother and her mother’s employer in recent weeks. Kellyanne responded to actions by Facebook and Twitter removing Trump’s tweets, calling their actions, “overly anti-Trump.”

Claudia responded directly to a tweet that quoted this accusation by saying, “ok girl most of america is anti-trump.”

Father, George, has asked media to refrain from contacting Claudia over these accusations in the past, tweeting in July, “To journalists:  @kellyannepolls and I do *not* consent to any communications between you and any of our minor children, including our daughter Claudia. So desist.” But Kellyanne has intentionally been fairly quiet in public.

In response to comments on one of her videos, Conway tells followers she is, “safe for now and staying with a friend in a different state.” She is also seeking the services of a pro bono lawyer.

We are sure this is not the end of the story, so make sure to stay tuned for updates.