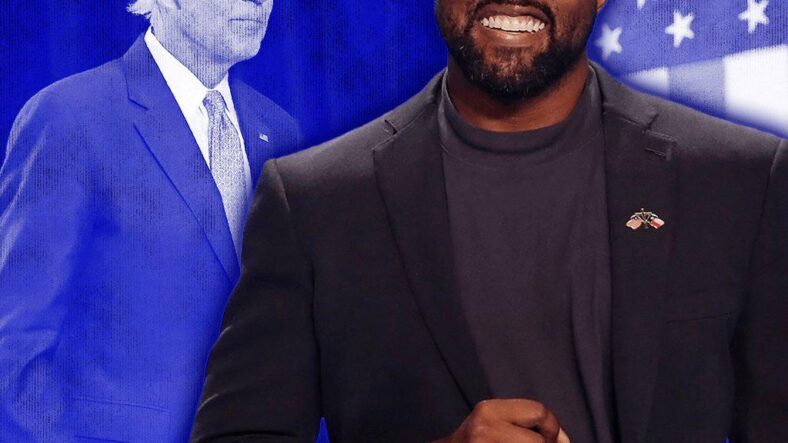 Kanye West had quite the interesting past seven days which have ended with him issuing a public apology to wife Kim Kardashian.

He kicked his week off on Sunday with his first campaign rally for his bid to be the President of the United States of America.

At the bizarre rally, he made rather offensive comments about Harriet Tubman and some outlandish comments about his wife, Kim Kardashian, and his daughter, North [Side note- tee-shirts to support him for President are available here].

Then, West had a bizarre Twitter rant in which he claimed Kim tried to lock him up and that he didn’t want his mother-in-law, Kris Jenner, around his children. Later in the week, he went on another Twitter rant, claiming he’s wanted a divorce from Kim and suggesting she cheated.

Then, Friday he was supposed to release his new album Donda: With Child, but that ended up not coming out. Instead, his long time arch-nemesis Taylor Swift released a surprise album, which will likely only stir the pot with West again.

There’s clearly no rest for the weary, though, as West is back on Twitter within the last hour. In his latest series of tweets, he has some interesting claims about the upcoming Presidential election he plans to be a part of and has issued a formal apology to Kim.

West began his latest series of tweets today, claiming that “I will beat Biden off of write ins #2020VISION.”

#2020Vision refers to West’s campaign slogan, and, with this tweet, he’s clearly claiming he will beat Democratic nominee Joe Biden.

West followed this tweet up with a very similar tweet, stating (in all caps) that “I CAN BEAT BIDEN OFF OF WRITE INS #2020VISION.”

A Few Other Tweets

After his first two tweets about Biden, West then tweeted about rapper Lil’ Wayne.

West then brought up Rihanna, Jay Z, Drake, and Lil Wayne again,, tweeting “I need me and Rih to have Jay open every one of our albums out of respect and lineage and Drake and Nikki have Wayne open every one of they albums …Wayne. triple goat #2020VISUON Yeah spelled rong.”

This one even stumps us as to what exactly he is referring to- although, it’s interesting to note West and Jay Z did have a strong friendship, then a feud, then squashed their beef at the end of last year.

Apologies To My Wife Kim

Then, West finally got into addressing his wife whom he insulted in tweets earlier this week.

“I would like to apologize to my wife Kim for going public with something that was a private matter,” he began with tweeting. “I did not cover her like she has covered me.”

“To Kim,” he added, “I want to say I know I hurt you. Please forgive me. Thank you for always being there for me.”

So What Next For West?

Based on West’s behavior the last week, we are sure this is not the last we’ll be hearing from him in the days to come.

It’s worth noting that after his apology to Kardashian, he did tweet something promoting his collaboration with Gap. The album Donda: With Child, however, is still missing with no mention of it by West since before it was due out.

We will be keeping our eyes on this story as we have the entire past week, so make sure to stay tuned for the latest updates.