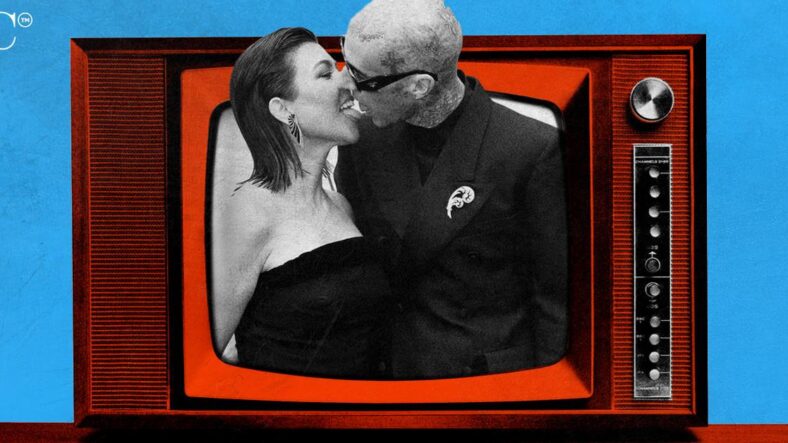 It's been no secret to the public that Kourtney Kardashian Barker and Travis Barker want to have a baby of their own. The couple has been candid about their hot and heavy romance since first dating and even documented their IVF journey on the new Hulu show The Kardashians.

Recently, fans started rumors that the Barkers might be expecting, however, nothing's been confirmed by them just yet.

Celebrating Their Love Three Times Over

Kourtney and Travis tied the knot for the third time in Portofino, Italy in a very lavish ceremony. By their side were Kim Kardashian, Kris Jenner, Kendall Jenner, Kylie Jenner, and Corey Gamble. But, prior to this celebration was a less planned one in Las Vegas, Nevada.

Eager to blend their families, the duo made their way to a chapel in Sin City after the Grammy Awards. During her April appearance on Jimmy Kimmel Live! Kourtney spilled, "There was no possibility to get a marriage license at that hour. … I'm like, 'Are you guys serious?' We asked, like, five times. 'What do we have to do to make this happen?' It was 2 a.m. and they were like, 'it opens at 8 o'clock.'"

So far, the couple has been married in Vegas, in a court house in Santa Barbara, and in Italy. They are not stopping there, however. Because let's be real, they need to celebrate with all of their other 'friends' in Hollywood. Kourtney and Travis will be celebrating one more time in Los Angeles, California.

A source for TMZ shared, "Travis and Kourt are still planning an LA wedding celebration." And although we don't have any details to share just yet, we do have reactions from fans in regards to this news.

Reddit users took their opinions to the board, one post writing, "I'm just ready to be over it. At this rate, the whole second season [of The Kardashians] is going to be entirely about their 4 weddings. They are absolutely dehydrated."

Another fan wrote, "At this point (actually, well before) this Kravis wedding crap is becoming indulgent even for celebs who are already indulged to the max. I won't give any further wedding the time of day. Maybe if we don't react, they'll stop. Like we do with kids."

Beloved "fans" often have a lot of input on the couples relationship, with a very big focus on their plan for more children. Following an Instagram story from Kourtney, fans speculated a potential pregnancy.

“Travis And I Want To Have A Baby”

A leaked video clip from The Kardashians revealed Kourtney opening up to her mother about her [tough] IVF journey. And, in a promo for their hit series, the mother of three shared, "Travis and I want to have a baby."

In a confessional she explained, "Travis and I want to have a baby, and so my doctor took us down this road of doing IVF." She admitted, "Like, it hasn't been the most amazing experience."

She delved into the emotional pain it has caused her, especially from fans who keep commenting on her weight, assuming that it's baby weight.

Fans previously blamed Kourtney's relationship for her depression but she herself said that it's the medication to help her get pregnant.

During episode two of The Kardashians the Poosh founder opened up to her mom, Kris Jenner, about her most recent mental health struggles.

She said, "The medication that they've been giving me, they put me into menopause. It basically put me into depression." To which the momager replied, "I feel like I've never seen you happier so the depression thing surprises me."

Kourtney agreed, "And I have everything in the world to be happy about. I just feel a little bit off. I'm super moody and hormonal. Like, I'm a lunatic half the time."

Fans Are Convinced There’s A Bun In The Oven

In a recent photo from Kourtney's 43rd birthday celebration, Travis is seen holding his wife's stomach. This body language instantly led fans to believe that the IVF worked and the couple is expecting their first child together.

Not only that, another photo from Kourtney's Instagram story fooled fans into thinking she was pregnant. 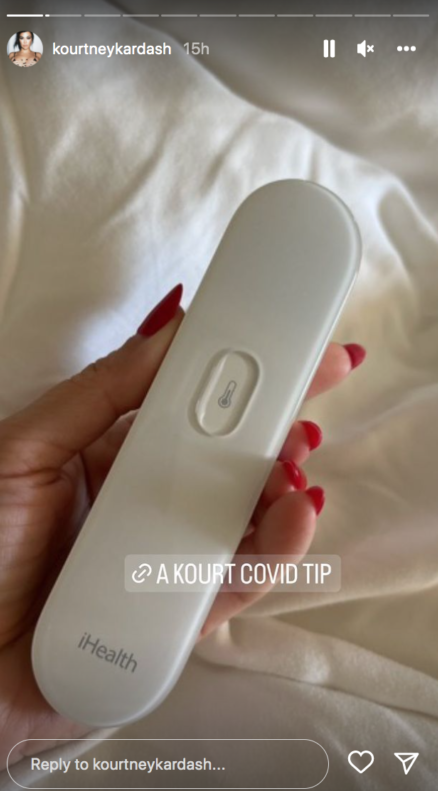 In a recent series of tips for getting through COVID, Kourtney shared a photo of a thermometer which fans instantly assumed was a pregnancy test.

One fan wrote on Reddit, "I thought that was a pregnancy test." Another chimed in. "Oop, me too!"

Hmm, rumors rumors. Do you think that the Barkers are in fact expecting? Or is it simply just wishful thinking from fans?