Kourtney Kardashian and Travis Barker have been in everyone's faces with tongue touching, booty grabbing and every other type of 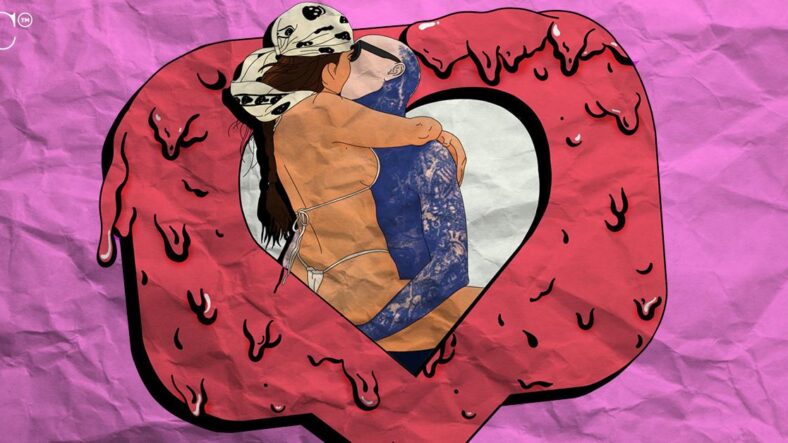 Kourtney Kardashian and Travis Barker have been in everyone's faces with tongue touching, booty grabbing and every other type of PDA you can think of. Although it was cute in the beginning, fans are beginning to get irritated by their actions. Clips from the Hulu series, The Kardashians, and social media posts have exposed Kravis for sharing a little too much affection for the public's liking. Not only that, viewers are also calling out what they think are red flags in the relationship, assuming that Kourtney is being "controlled" or exhibiting "obsessive behavior".

Grinding On Eachother With An Audience

Back in April, an episode of The Kardashians showed Travis and Kourtney on a house tour for a mansion with potential to be their next home. However, it became a little more than just a tour of the house. When the couple was brought into the backyard, it also became a little tour of each other.

The couple completely disregarded what the realtor was saying and made their way over to a couch in the very big backyard of the house. With the realtor just standing yards away from them, like an uncomfortably close proximity, Travis sat down on the couch and Kourtney proceeded to straddle and then grind on her man all while in a tight black mini dress. She put his arms around her neck and Travis grabbed her butt with both hands.

Taking zero hints, with the realtor a head turn away, the couple continued on to talk about how uncomfortable people appear to be about their PDA.

Travis said, "I think people have trouble understanding how two people can be so in love and affectionate because they're f–king miserable. That's why."

It was in that moment that they realized the realtor has left the space which led the rockstar to joke that he "gave up on us. He's like, 'these two are making out in the backyard."

And, while the realtor might've stayed quiet, the viewers didn't.

One Reddit user slammed them by writing, "Okay this excessive PDA is getting to me."

Another commented, "You're looking for a house together with a real estate agent and you take a break to make out in the backyard?? They act like horned up teenagers like you don't know how to control yourself for a moment while house hunting?"

A third person chimed in with, "In front of the realtor? Really?"

While one other viewer questioned, "Why is she grinding on Travis during a house tour? Gross."

Viewers are insisting that the relationship of Kravis waves a lot of red flags that are being ignored. After Kourtney opened up about her depression in a episode of the family's Hulu show, fans are assuming it's due to her relationship.

a Reddit use commented, "The fact that she openly was saying how she went into depression (supposedly because of the IVF treatment) and Kris said she was surprised just goes to show that this family bulldozes over red flags as if they don't even see them." Continuing to say, "Experiencing depression within the first year of a new relationship is a red flag."

The fan also added, "The extreme PDA is degrading. The fact that she dresses punk and vegan now is also a red flag."

Another fan agreed writing, "Their excessive PDA is almost embarrassing and it comes off as controlling to me. I also noticed her dressing differently now that she's with Travis and it's like nothing exists in her world but him. It almost feels like an obsession but in a bad way?"

Fans are blaming Kourtney's relationship for her depression but she herself is saying that it's the medication to help her get pregnant. During episode two of The Kardashians the Poosh founder opened up to her mom, Kris Jenner, about her most recent mental health struggles.

She said, "The medication that they've been giving me, they put me into menopause. It basically put me into depression." To which the momager replied, "I feel like I've never seen you happier so the depression thing surprises me."

Kourtney agreed, "And I have everything in the world to be happy about. I just feel a little bit off. I'm super moody and hormonal. Like, I'm a lunatic half the time."

Hmm, what do you think? Is Kravis on its way to being doomed or is Kourtney's depression and lack of self due to the intense hormone flop from her medication?