While 80,000 “burners” weren’t able to converge on the temporary metropolis known as Black Rock City, Nevada this year for

While 80,000 “burners” weren’t able to converge on the temporary metropolis known as Black Rock City, Nevada this year for the annual Burning Man festival, they now have a new place in Las Vegas to visit year round that captures the visual vibes of the popular event.

Area15 art and entertainment complex is now open in Vegas and it features many of the creators behind the incredible site-constructed experiential art installations that can be found at Burning Man.

Plus, inside Area15 you can fly like a bird or a comet, eat a cone of space cake and drink a magical elixir under an illuminated tree.

However, tickets to Area15 might just be the hardest free tickets in Las Vegas to get—and the only tickets in town as live entertainment remains shut down—they are sold out until November due to limited capacities.

“We felt we needed to open at a time that is very difficult for people to make sure art and inspiration are coming into their lives,” says Area15 Chief Creative Officer Michael Beneville. “The whole building is designed to roll with whatever is happening.”

Located off Interstate 15 in the heart of Las Vegas, Area15 is a massive, grey 40,000 square-foot warehouse and compound, but what’s inside comes to life in a full spectrum of colors. Step inside and prepare to vacate your mind, fall down the rabbit hole and take a break on another cosmic plane. 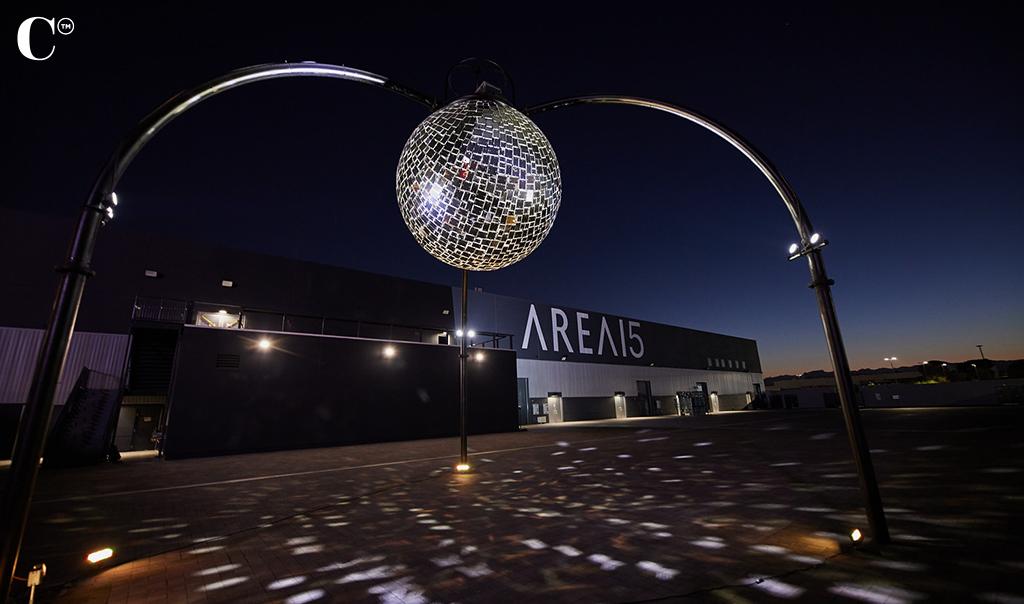 Celeb Magazine got a behind the scenes tour of Area15 from Beneville and Chief Executive Officer Winston Fisher and there were oohs and ahhs at every turn. Only about 50 percent of the experience is currently open but here’s what to see now and what to look forward to in the coming months.

“This is a chance to lose yourself,” Fisher says.

Before you step inside, peruse Art Island, located in the parking lot, a gallery of large-scale works that are for sale including Matt Elson’s Infinity Ship (No. 1), a shipping container that puts you in the center of a psychedelic kaleidoscope. Elson’s work is also featured in the Google headquarters and the Science Museum of London. 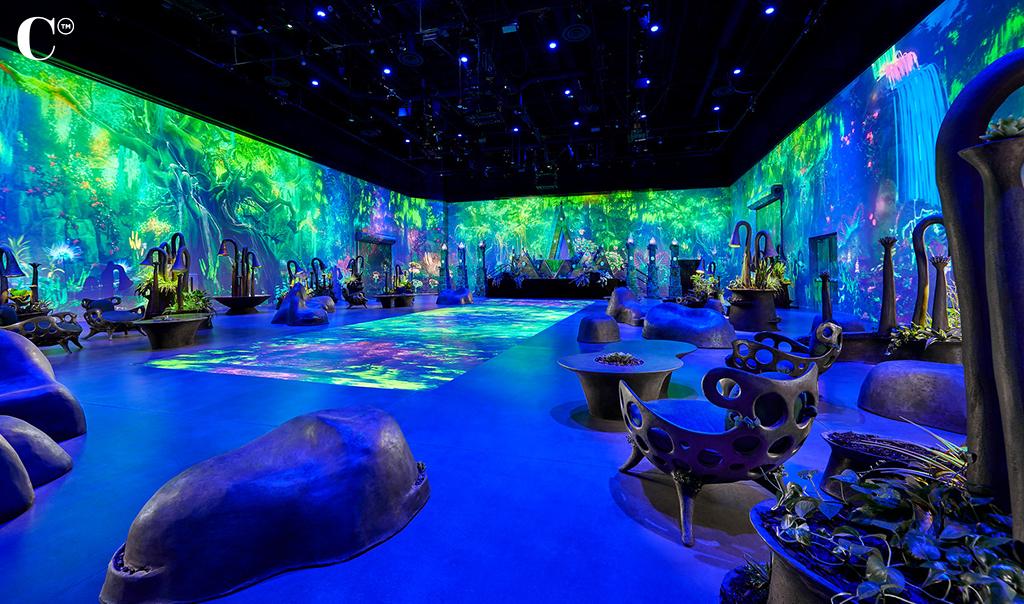 There’s even a 13-foot tall, fire-breathing dragon named El Scorcho by Ivan McLean.  Soaring over the entire situation is Alchemy Arts’ Omah, a neon-lit inflatable owl, who “serves as an ambassador between the avian and human worlds, and reminds us all to connect with our inner bird of prey.”

A Journey Through Area15’s Spine

While many of the interior attractions will be opening in the coming months, the spine of Area15 or its center corridor is in full swing, literally. Both of the amusement-park style rides are flying themed but have super cool twists and turns thanks to incredible technology.

Birdly Virtual Reality Experience puts the wind beneath your wings as you fly over digital worlds from New York to Singapore, prehistoric civilizations or play a futuristic racing game. Overheard throughout the warehouse, Haley’s Comet  is the first indoor, electric dual-track suspension ride in the United States. Glide alongside another rider in a race that reaches up to 8-miles an hour.

Once back on the ground, grab an ice cream cone or a fudge brownie treat from Boston-based Emack & Bolios with fun flavors like space cake that play to the Area15 theme. 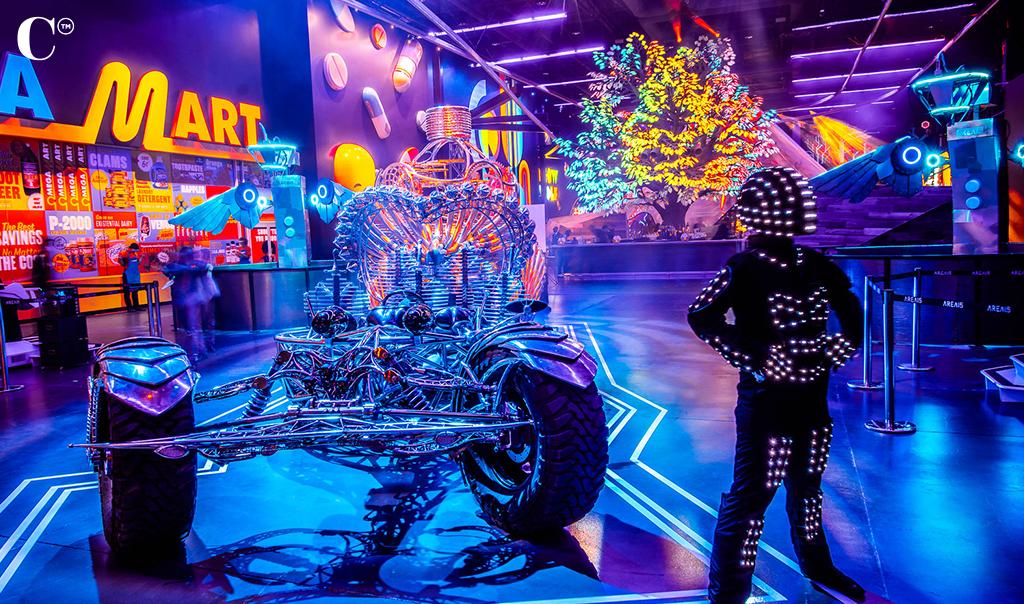 Chef Todd English, who will open The Beast Food Hall at Area15 at a later date, is doing an outdoor culinary pop up with everything from sliders and salads to lamb chops and hot chicken.

At the center of Area15’s spine is Oddwood, conceived by Las Vegas bar and restaurant maverick Ryan Doherty. At the center of Oddwood bar find a 23-foot-high Japanese maple with 5,000 twinkling LED lights.

Beyond the big tree, explore Gallerie 360 inside The Portal, a 360-degree projection mapped room currently showing Las Vegas Raiders games, which doubles as an event space and volcanic fairy land Sanctuary by Ibuku Design Studio, made from bamboo cultivated from Bali and Java. The airy dome is made from all-natural materials, acting as a living organism complete with lush plant life. Sanctuary is also available for private event bookings. 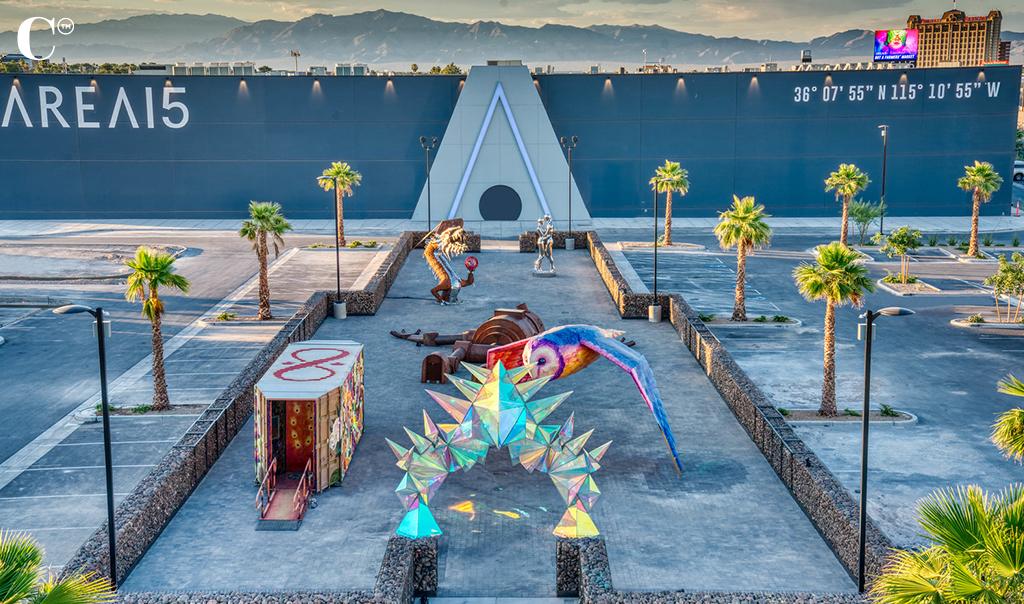 Other major art works to trip out on include the Mad Max-style kinetic art car Valyrian Steel by Henry Chang Design and Shogyo Mujo, a 12-foot tall skull covered in 3D projection mapping and synched to music by Bart Kresa Studio and Joshua Harker.

Omega Mart from popular art collective Meow Wolf will open in early 2021. Its facade, which can be seen from inside Area15 features dancing pills and odd-ball tattooed chicken skin advertisements so we can’t wait to see what’s going on in there.

Thanks to its massive building, Area15 is perfect for socially distanced fun and plenty of selfies. Now if you can only get in.