This week’s Real Housewives of Beverly Hills episode revisited the drama that’s been unfolding between Denise Richards and Brandi Glanville this season. Lisa Rinna chimed in on the alleged affair, saying she feels as though she should have texted Richards to warn her that Glanville was claiming the two had slept together. “You would have warned me,” Rinna says, “I should have sent a text, I didn’t and I think that’s where I feel really bad.”

This season has been filled with tense moments as Richards and Glanville squared off over claims that the pair had allegedly had an affair. Richards denies having slept with Glanville, but Glanville has shared text messages and told her side of the story with consistency and clarity. While Richards is adamant in her denial, what would Glanville gain by making up the alleged affair?

Richards and Glanville stayed in a North Carolina home together while filming a podcast. According to Glanville, a few nights of drinking and fun led to the pair sleeping together. Glanville made claims that Richards and her husband, Aaron Phypher, were in an open marriage. Glanville told fellow castmates Kim Richards, Teddi Mellencamp-Arroyave, Lisa Rinna, and Kylie Richards at a charity event about the details of the affair.

Rinna now knew, but didn’t warn Richards that Glanville was claiming an affair

This is the point at which Rinna believes she should have texted Richards a heads-up that Glanville was making these claims. As the cast sat together at a table in Rome, Richards made some shocking claims of her own. After Mellencamp-Arroyave confronted Richards about the claim, she fired back with, “I will tell you, Brandi said that she’s had sex with some of the people from this group.”

Stunned, Kyle Richards asked for clarification, “someone at this table?” and Denise affirmed, “yes!”

Denise Richards said, in a private confessional to the camera, “Brandi told me this the very first time I met her. I would never lie about that. But I’m not going to name names, because I don’t know if it’s true or not and I don’t care.” 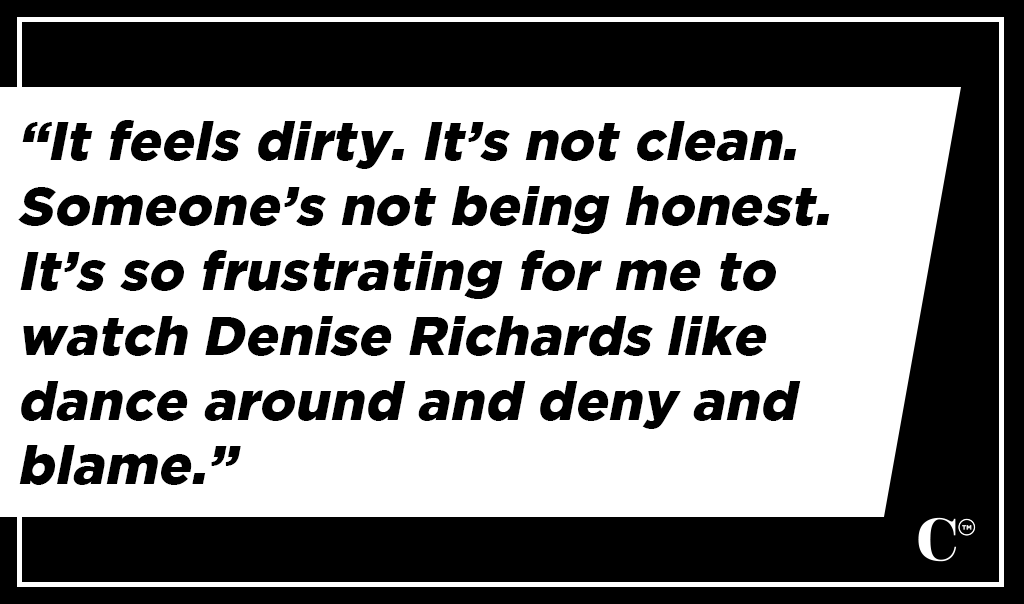 Rinna and Kyle Richards immediately refuted the claims, Rinna angrily shot back, “I don’t think she’s ever said that, so don’t say that! Don’t even put that out there.”

Denise, feeling ganged up on, saying, “All I’m doing is telling the truth. Let me tell you this. Did I say anything about you guys? No I did not. She’s the one that actually said that about you.”

But Rinna says, “It feels dirty. It’s not clean. Someone’s not being honest.” Rinna said to cameras, “It’s so frustrating for me to watch Denise Richards like dance around and deny and blame.”

Rinna was firm at the table, saying to Richards, “Denise, you have chosen to sit here, then you need to f—-ing own it.”

On the defensive, Richards shot back, “I have owned it and it’s not good enough!”

Later, the women sat together over drinks. Richards continued to deny claims that Glanville had made, saying she had never said bad things about Erika Girardi to Glanville. Richards tells the women, “I swear on my mother’s grave, [Brandi] is lying about that. She’s f—-ing lying. Actually, she’s the one that said that! I would never say that! Lisa, that’s the truth!” 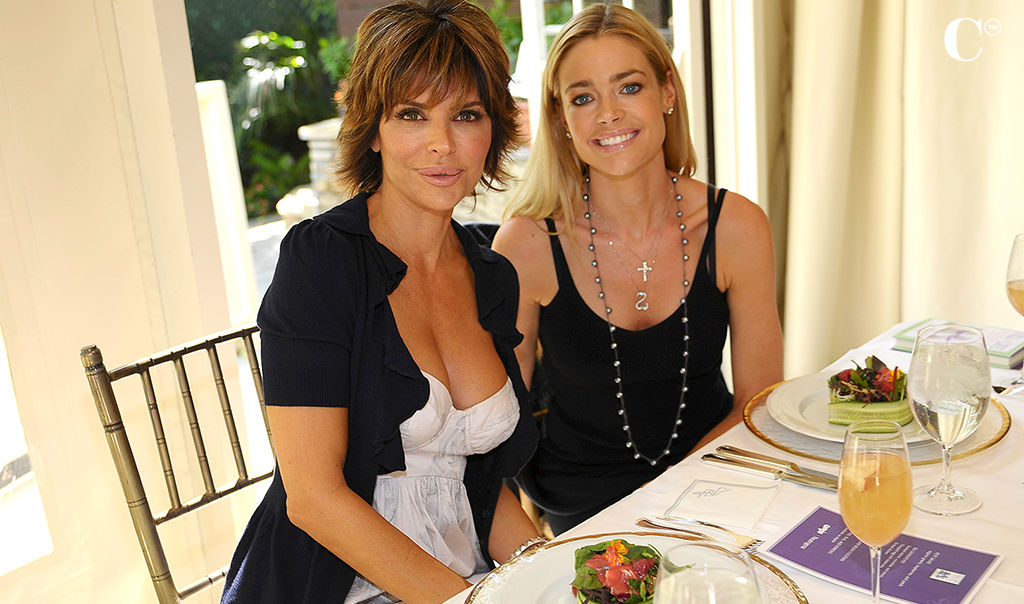 But Rinna was clearly torn, saying, “I don’t know what to believe.”

Richards broke down in tears, “I have been so f—ing honest and then some.”

The next day, Richards and Rinna spoke again. This time, the tears came easily but the subject was reconciliation between the pair. Rinna said to cameras, “I texted Denise last night checking on her and I didn’t hear back, so I think she’s mad at me and it’s a friendship worth fighting for because I really like Denise.”

When the women sat down together, Rinna turned to Richards and said, “last night was really tough, and I’m sorry about that.”

Richards responded, “energy that you are projecting towards me comes off like you are attacking me, and you are almost interrogating me. And several of these big dinners, you’re coming off as a mean friend. I feel like, why the f— did you even invite me here?”

Rinna said, “because I love you, because you’re my friend!”

Richards tearfully responded, “it doesn’t come off that way. When you see your friend upset, if I saw you crying at the table and everyone was coming at you, I would say, ‘Guys, stop!’ Like, who does that? And keep going and going and going? It’s so hurtful!”

Rinna continued to defend herself from Richards’ claims, saying, “Here’s the thing that was not okay for me last night. What you said about Brandi towards us…”

Richards broke in with, “it’s true!”

Rinna said, even so, “it’s not cool.” And though Richards claims Glanville has said she has slept with many people and not specifically anyone at the table, Rinna calls her out. Rinna responded, “But when you said it was somebody at the table, that’s not fair. You don’t need to tit-for-tat it, and you’ve tit-for-tatted a little bit with me. Don’t do it anymore!”

Denise, feeling cornered, said in consternation, “Stop attacking me. I had your back! I defended you with Kyle at my house when she kept telling you to f— off and ‘f— you’! If Everyone for the last twenty dinners kept coming at you, I would, as your friend, step in and say, ‘stop, guys.’ That’s where I feel like you have not been a friend to me.”

This seemed to held Rinna understand, and she admitted that she handled the night before in a, “terrible f—ing way.” Richards said, “I’ve never experienced this with you, and I’ve known you a long time.”

While Rinna said, “If you’re mad at me, I respect that,” Richards clarified that she was not mad. “I am hurt, that’s it. I’m not mad at you, I’m very hurt!” 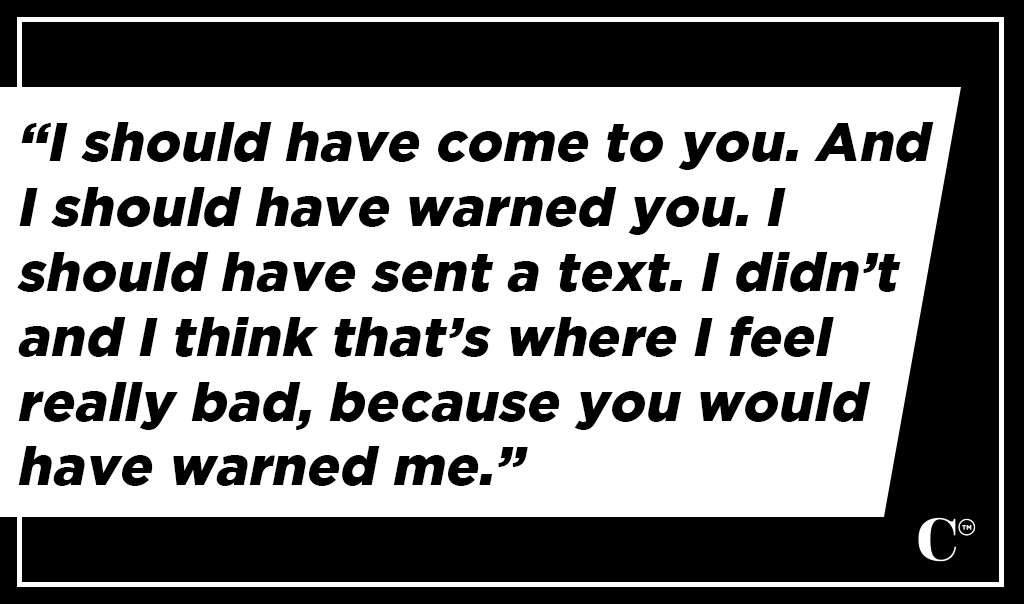 Rinna said, “I feel like I really failed you, Denise, I’m just trying to make it so that everybody can move on and I’ve just f—ed up even more and I just don’t know what to do about it!”

Richards encouraged her friend, “Lisa, just be you! You’re strong and you do stand up for what’s right. Because that’s the friend that I love.”

Richards agrees, “I would have. I would have told them,’guys don’t go there.’”

The pair apologized back and forth, sharing their heartache and frustration at the ongoing drama. In the end, Rinna said to Richards,”I’m gonna be a better friend,” and Richards responded, “I’ll be a better friend for you too.”

The pair has made up, but the drama continues

While it’s wonderful to see this pair make amends over the whole affair, the drama hasn’t ended. Glanville still stands by her story of events and fans seem to be taking her side. While they may not appreciate the way Glanville revealed they affair, most fans agree that Glanville stands to gain little and risk much with her claims about the affair with Richards. Glanville claims the truth will come out as the series continues to air, and the explosive Season 5 reunion should answer any questions left unanswered by then.