For years now, One Direction fans have been convinced that Louis Tomlinson and Harry Styles were secretly in a relationship. 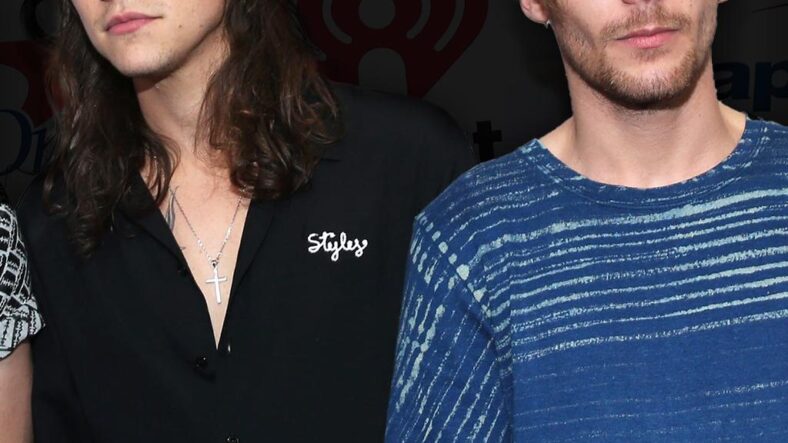 For years now, One Direction fans have been convinced that Louis Tomlinson and Harry Styles were secretly in a relationship. Yep, for those who don’t know, the guys were put into the band (alongside Liam Payne, Niall Horan and Zayn Malik) after auditioning as solo artists on The X Factor. And right away, Styles and Tomlinson instantly hit it off.

But when fans started to notice a bunch of cute little interactions and interesting comments made between the two guys online, on stage, in videos and during interviews, theories started to arise that they were more than friends. Now, there are entire Tumblr pages and Twitter accounts dedicated to the rumored relationship — which fans refer to as Larry Stylinson — and over the years, fans have compiled tons of pictures, videos, GIFs, quotes and so many more things that they believe are proof of Styles and Tomlinson’s love.

So are these two actually in a relationship? Did they ever date? And why do fans think they are in love? We broke it all down for you and rounded up all the alleged evidence — here’s what we know…

They Lived Together In Princess Park

So where did the speculation begin, you ask? Well, let’s go back to 2012, just after the group released their first album, Up All Night. At the time, reports emerged that claimed the two guys had moved into an apartment together called Princess Park Manor. Now, it’s obviously possible that they lived together as friends, but many fans are convinced this was the first real evidence that something romantic was going on between them.

Their interactions on Twitter also had fans convinced that they were dating. Just check out some of their cutest messages to each other here:

Is laughing so bad with @Louis_Tomlinson .xx

@Harry_Styles hahaha I am being slowly seduced by your curls

Oh, @Louis_Tomlinson likes to hold his nipple in his mouth when he’s driving. Stretchy nips.

@Louis_Tomlinson have fun sweet cheeks…see you at home later .x

@Louis_Tomlinson just came and got in my bed with a cup of tea. Backstreet Boys are on 4Music… Typical Wednesday.

On October 2, 2011, Tomlinson practically broke the internet when he tweeted, “Always in my heart @Harry_Styles. Yours sincerely, Louis.” It’s now pretty known as the official “Larry” tweet, and it has over 1.3 likes and 2.7 million retweets.

Always in my heart @Harry_Styles . Yours sincerely, Louis

After the guys’ show in Wellington, NZ, in April 2012, Styles and Tomlinson went out to celebrate. And when a fan took a video of them during their night out and it appeared that they kissed in it, it fueled speculation even more. Unfortunately, the clip is super grainy so it’s hard to tell what really went down in it, but it quickly sent the 1D fandom into a frenzy.

Plus, during a signing in 2012 when a fan asked Styles point blank if he was in a relationship with Tomlinson, he nodded and said yes.

They Had A Lot Of Cute Interactions During Interviews

Throughout 2011, 2012 and 2013, their interactions during interviews helped fuel the rumors even more. Not only did they pretend to kiss numerous times, but they also held hands, played with each other’s hair, gave each other should rubs, rubbed each other’s faces, wrestled and so much more. Check out some of their sweetest moments here:

Oh, and get this — the “Sign of the Times” crooner even said that Tomlinson was his first crush once!

Tomlinson also said he had a crush on Styles during a live stream with fans. “Do I like anyone? I’m actually rather fond of a certain curly boy but I don’t want to jinx it yet,” he said.

Oh, and some fans are also noticed that during a performance of their song “Little Things” back in the day, Styles changed the lyrics to “I’m in love with Lou” — instead of “in love with you” — “And all his little things.”

They definitely could have been joking around, but the Larry fans certainly don’t think so.

Many fans also believe that Styles and Tomlinson have a few matching tattoos, which they feel is more proof of their relationship. For example, the “Walls” singer has a dagger tattooed on his left arm, and Styles has rose inked in the exact same spot on his arm. Tomlinson also has a body art that says “Oops!,” while Styles has the word “Hi” tattooed in the exact same handwriting. And get this — it’s rumored that those were the first words they said to each other!

That’s not all. Tomlinson also has quotation marks tattooed onto his wrist, and some people are convinced that it’s another tribute to Styles. Why? Well he has the words “I can’t change” inked in the same spot.

Fans Think Their Management Forced Them To Hide Their Relationship

So if they were dating, why didn’t they just announce it, you ask? Well, fans are convinced that their former management company — Modest Management — made them to hide it from the world. And as time went on and they stopped publicly spending time together, some people felt that it was more proof that Modest was forcing them apart in an attempt to cover their romance up. Larry shippers also believe that every time Tomlinson and Styles publicly entered into a relationship with women over the years (Styles was linked to the likes of Kendall Jenner, Taylor Swift and more over the years, while Tomlinson has been in a long-term relationship with Eleanor Calder), that they were all fake and an attempt to hide their true love for each other.

As fans know, Tomlinson has been in a relationship with Calder since 2011. They were together for most of his time in 1D, then took a break in 2015, but got back together two years later and have been going strong ever since. But despite their very-public relationship, many fans think it’s all a ploy to distract the world from the fact that he’s dating Styles. Fans have analyzed almost every photo that’s out there of Tomlinson and Calder, and they’re convinced some of them were manipulated and edited to make it look like they were together when they really weren’t. See for yourself:

During his break from Calder, Tomlinson was briefly linked to a hairstylist named Briana Jungwirth. And when news hit the web that she was pregnant with the singer’s first baby a few months later, fans were pretty shook. Their son, Freddie Reign Tomlinson, was born on January 21, 2016 — but naturally, there are tons of theories surrounding Tomlinson and his child.

Some people are convinced that the entire pregnancy was faked using photoshop and a doll. While others think Jungwirth did give birth to a baby boy, but that Tomlinson is not the father. You see, after the now-4-year-old was born, some reports emerged that said Tomlinson got a DNA test to prove that Freddie was his son, while other news articles claimed he never got a paternity test after all.

What Did The Guys Say About The Rumors?

Despite all of their suspicious interactions, Tomlinson has continuously denied that anything went on between him and Styles. In 2012, he took to Twitter to address it once and for all, writing, “Larry is the biggest load of bulls**t I’ve ever heard. I’m happy, why can’t you accept that.”

Then, in a 2017 interview, Tomlinson spoke out about the rumors again. And he claimed that the “conspiracy” theories about their relationship made him and Styles grow apart.

“It kind of happened naturally for me and Harry because a certain amount of the fans drew up this conspiracy,” the 28-year-old said, when he was asked why they weren’t as close anymore. “When it first came around I was with Eleanor, and it actually felt a little bit disrespectful to Eleanor, who is my girlfriend now. I’m so protective over things like that, about the people I love. It created this atmosphere between the two of us where everyone was looking into everything we did. It took away the vibe you get off anyone. It made everything, I think on both fences, a little bit more unapproachable.”

He also said he “very, very high level of respect for Harry,” causing all of our hearts to burst.

Malik also addressed the Larry rumors in a 2017 interview. He told Fader Magazine, “There’s no secret relationships going on with any of the band members. It’s not funny, and it still continues to be quite hard for them. They won’t naturally go put their arm around each other because they’re conscious of this thing going on, which is not even true. They won’t do that natural behavior.”

Here’s Where Their Relationship Stands Now

So did they ever really date and are they trying to keep it a secret from the world or is all a wild conspiracy theory and is Tomlinson madly in love with Calder? While it’s still unclear what exactly went down between them, as of May 2019, Tomlinson told Hits Radio Breakfast that he had “not seen Harry for a while,” but he did add that he has “been in contact” with him. Of course, some fans think that this is another cover up, especially after one person claimed that they saw them together on vacation in Italy last year. We guess the only people who really know the truth are Styles and Tomlinson themselves.