The Louis Vuitton Fall 2021 Menswear Show has dropped, and it offers some stunning imagery. Famed designer and flagship Vuitton

The Louis Vuitton Fall 2021 Menswear Show has dropped, and it offers some stunning imagery. Famed designer and flagship Vuitton artist Virgil Abloh’s show boasts a proud Black inspiration, and provides a staunch repudiation of the messy-hair-and-sweatpants fashion of the pandemic thus far. With jaw-droppingly creative pieces and Abloh’s curious penchant for whimsical fashion, the Fall 2021 Menswear show is sure to delight.

Abloh’s Inspiration in James Baldwin’s ‘Stranger in the Village’ 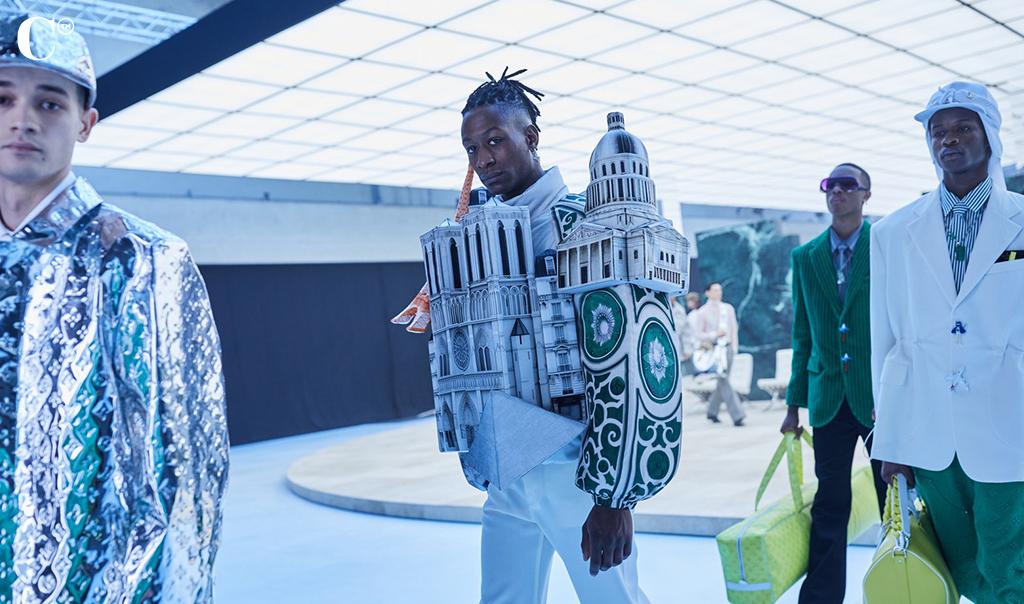 Abloh – LV’s first Black creative director – has always unapologetically woven his Ghanian heritage into his fashion and creations. From small touches to overall themes, Abloh’s past has inspired a world of stunning fashion pieces and shows. For the Fall 2021 Menswear Show, Abloh’s inspiration comes from none other than legendary Black author and activist James Baldwin.

Abloh pulled directly from Baldwin’s lauded and deeply poignant essay, “Stranger in the Village,” first published in Harper’s Bazaar in 1953. In the essay, Baldwin recounts his experience of living in a Swiss village as the only Black person most of the townspeople had ever seen. Baldwin describes feelings of utter isolation and alienation, often feeling as though he is looked at as not even human. While the villagers seem incapable of appreciating that Baldwin has a fully functioning sense of distinction and inner dialogue, Baldwin in turn regards them as children of the world, unformed and naive in their experiences.

A LitChart summary of the essay adds, “The final passage of the book zooms out from Baldwin’s particular experience in the Swiss village to make an overarching statement about the future of race relations across the world. Baldwin argues that white people in America are motivated by a desire to return to a (mythical) ‘innocence’ in which black people simply do not exist, and it is for this reason that white Americans continue to exclude, oppress, and terrorize black people rather than accepting that black people are just as American as whites are. This desire for innocence is problematic in a number of ways, not least of which is the fact that it strives to ignore the crimes committed by white people against people of color, rather than holding white people accountable. However, because this innocence will never be a reality, Baldwin ends on a hopeful note that progress is inevitable.”

It is no mistake that Abloh chose this essay to inspire against the backdrop of the racial tensions of 2020 and the sense of isolation felt as the pandemic wore on.

What the Collection Boasts 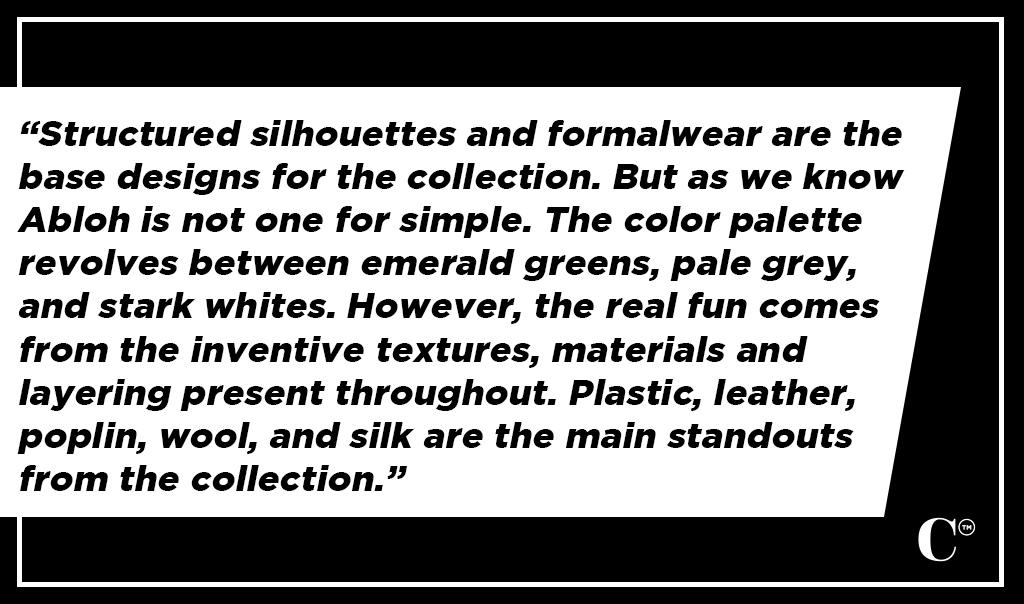 CRFashionBook explains, “Structured silhouettes and formalwear are the base designs for the collection. But as we know Abloh is not one for simple. The color palette revolves between emerald greens, pale grey, and stark whites. However, the real fun comes from the inventive textures, materials and layering present throughout. Plastic, leather, poplin, wool, and silk are the main standouts from the collection. Some of the most notable looks include a transparent monogrammed suit, a sculptural city scape jacket, steel toed western boots, and reflective monograms of the updated LV logo. Some of the house classic accessories are also reinvented such as the new Christopher backpack redesigned in Epi leather and featuring a spray painted effect and the Attaché bag given bright neon elements.”

And Fashionista expands, “The line was presented in the form of a video that had performance art, spoken word, music and models walking (and ice-skating) through scenes that included a snowy outdoor landscape and a green marble-filled interior. In the accompanying show notes — which went on for a lengthy 36 pages — Abloh included manifestos, paper dolls featuring a few looks from the collection, a picture of his maternal grandmother in Ghana, thoughts on the inclusion of upcycled pieces and the ‘vocabulary according to Virgil Abloh,’ which defined everything from clothing construction techniques to artistic terminology.” 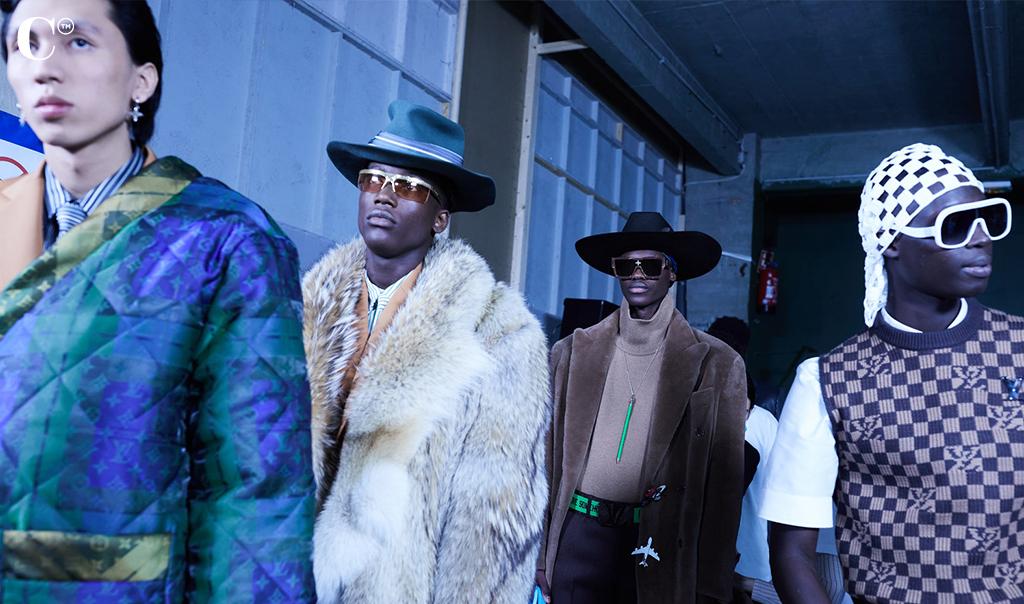 Abloh’s pieces clearly repudiate the thus-far lackluster embrace of pandemic fashion. People stuck at home are less likely to focus on high fashion, and Abloh is challenging that mindset, reminding the world that fashion can be art, expression, and healing. The backdrop of racial tensions against which Abloh set his Baldwin-inspired performance is also a repudiation of the alienation of people and a reminder that progress happens when we challenge ourselves. With Mos Def and Saul Williamsheadlining the show amidst a snowy backdrop, and influencer Noah Beck in the virtual front row, the 2021 Fall Menswear collection is a return to what makes fashion a star affair. Abloh seamlessly blends the formal and practical with the whimsical and bold, and most of these looks would be right at home on the fashion streets of LA or New York, or in small boardrooms and offices across America, challenging the elitist nature of high fashion.

As Williams’ voice recalls Baldwin’s essay and sets the snowy backdrop in the 50’s era recollection, models boldly represent various archetypes Abloh uses to set the stage. FootWearNews writes, “‘Within my practice, I contribute to a Black canon of culture and art and its preservation. This is why, to preserve my own output, I record it at length,’ read a quote from the barrier-breaking designer that was included in the show’s press release.”

Abloh’s ability to blend the experiences of the world around him with the fashion needs of a world trying to move forward makes him a singular talent in the fashion world, head and shoulders above many peers. The LV Fall 2021 Menswear Show is no exception.