Machine Gun Kelly has been on the rise, from his movie cameos to his music career, and, we can't forget 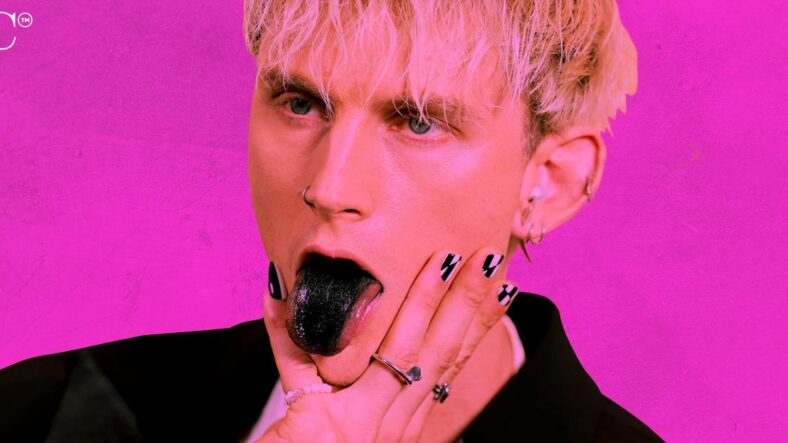 Machine Gun Kelly has been on the rise, from his movie cameos to his music career, and, we can't forget his whirlwind romance with Megan Fox. Now, the star is the main subject of a Hulu documentary Life In Pink, which will give fans a look into areas of his life that have yet to be seen.

The couple walked the carpet of the premier together, sticking to the theme of the film, wearing pink locks and fits, looking great as always.

There's no such thing as too much pink. Fox traded in her signature look for a platinum head of hair with pink lowlights. She complimented it with a Nensi Dojaka blush-colored figure-hugging mini dress with a cut-out at the bust. The monochrome look was completed with pink strappy sandal heels, pink nails, and a soft pink lip.

Kelly matched the theme as well, rocking slicked back hair with a fuchsia hue. He sported white pants and white sneakers stacked beneath a pink and blue turtleneck.

Life In Pink As Colson Baker

Machine Gun Kelly, born Colson Baker, got vulnerable in his documentary about a time he contemplated suicide. He explained that it happened in July 2020, following the death of his father who he had recently reconnected with.

In a tweet from this month (June 2022), Kelly wrote "My whole life changed in the last two years, and we had the cameras rolling," along with a trailer for the film.

In a teaser for the film, Kelly shared, "Ninety percent of my fans listen to me because of the pain they relate to in my lyrics. I watched my dad suffer a lot. The last time I heard from him I was like, ‘I love you so much and I’m so sorry for how we lived this life together. We’ll do it better on the next one.’”

During a panel in June 2022 for his movie Taurus, Kelly explained, “Because of the way that I grew up, I kind of push away everybody and every situation that has a positive outcome because I just kind of perceive myself as unworthy or low or undeserving and that’s been implemented since childhood. I’m learning a lot more about my childhood now and why I’m made like that."

He continued, "I have a real problem accepting happiness and it’s healthy watching it on screen to remind yourself like, ‘OK yeah, you don’t want to end up like that guy.’ I always have a weird way of writing things on paper that come true.”

He received support from his loving fiance on stage who said to him, "You can't receive the gifts that God’s trying to give you if your hands are closed. You have to open your hands."

Trailers for the documentary show appearances from Fox as well as a close friend to Kelly, Travis Barker. There might even be scenes with his daughter, Casie, who continuously defends him against critics, one time saying, "People say that stuff about my dad, but you only see one side."