This month, Madison Square Garden is making history. On April 30, for the first time in 140 years of being 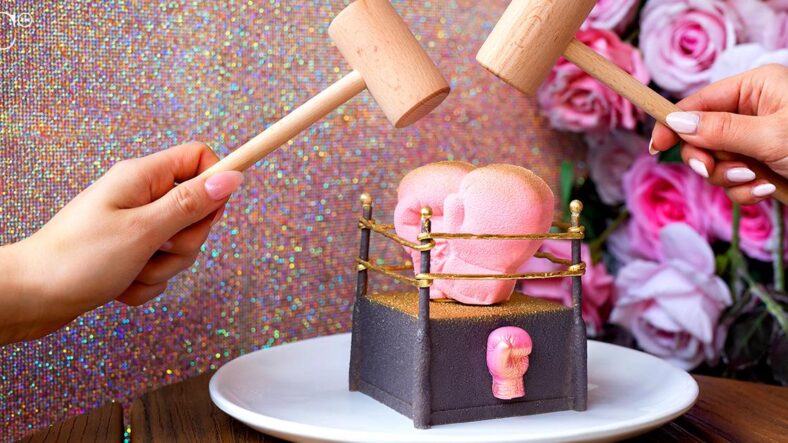 This month, Madison Square Garden is making history. On April 30, for the first time in 140 years of being the mecca of boxing events, MSG is hosting a women's boxing match. Headlining the fight is the world's #1 and #2 fighters – Katie Taylor and Amanda Serrano.

Just a few blocks from Madison Square Garden is one of New York City's finest rooftop bars – Magic Hour Rooftop Bar & Lounge at Moxy Times Square. And to honor the history being made just down the street, Magic Hour is sharing a limited-time dessert called the Pink Gloves Boxing Dessert – and you won't want to miss this delight.

Magic Hour may be New York City's most Instagrammable locations. Even so, the Pink Boxing Gloves Dessert is in a weight class all its own – it takes beautiful and delicious dessert to the next level.

The dessert is made up of Neapolitan Ice Cream – with Vanilla, Chocolate, and Strawberry Ice Cream, Flourless Chocolate Cake, and a Pink Boxing Glove Surprise with pink sprinkles.

The dessert only costs $30, and is only available for a limited time April 25-30. For more information or to find out how to enjoy this culinary delight for yourself, visit the website.

This match between Taylor and Serrano is historic, and it's important for more than just women's boxing. This is also a momentous occasion for Madison Square Garden.

MSG has long been the ultimate mecca for the boxing world, the place you want to fight if you want to feel like you've made it. The boxing world has been hesitant to let the women's division of the sport gain equal footing to the men's, but MSG hosting women headliners proves that the future is now. MSG being a part of this leap forward into equality for boxing is appropriate, given that the venue is the heart and soul of the sport.

Serrano recently signed with Jake Paul, who pushed to make this match a reality.

SportingNews writes, "According to Paul, and as confirmed by Hearn, both fighters will be making seven figures for this fight, something that was once considered unprecedented. Paul made sure to point out that this fight is for the fighters of the past as well as the current crop of fighters.

'It's also about Ann Wolf, Christy Martin, Laila Ali, Mia St. John, and so many other legendary boxers that helped lay the foundations for the ladies to be sitting here today. It’s about Claressa Shields, Mikaela Mayer, Alycia Baumgardner and other amazing professionals currently in the sport,' Paul said. 'Most of all, it's about the future young women and girls all around the world who will see April 30 as a moment that made the impossible, possible, equality as it’s meant to be.'"

Magic Hour is one of New York City's favorite locations. Both a visual and culinary delight, it's the kind of place you go when you're tired of the mundane – and you're ready for the extraordinary. Magic Hour is an experience unto itself, with some of the best views in NYC and an electric atmosphere that's second to none.

CELEB explored this exciting destination venue when they donned breathtaking pink silk roses for Summer 2021; "The Moxy Hotel Times Square is perfectly positioned to be a unique NYC locale, with all the flair and individualistic design that makes it a must-see on any downtown trip. Magic Hour’s rooftop perch cements the hotel’s flawless command of 7th Ave., boasting the largest rooftop lounge downtown.

The website’s description says of Magic Hour; 'Perched 18 floors above the city, Magic Hour boasts five distinct environments. The gallery-like entrance hall features whimsical topiary animals in naughty positions. A small interior lounge has a sexy urban-industrial vibe, with wire mesh panels riveted to the ceiling and walls. There are two separate outdoor areas: The east side, overlooking the Empire State Building, has elegant garden-party fixtures, while the west is more overtly carnival-esque, with one seating area rotating slowly like an antique carousel.'"

If it's charm, uniqueness, and atmosphere you seek – Magic Hour is the place to be in NYC.

With the Pink Boxing Gloves Dessert only here for a limited time, it's better to be there sooner than later – so plan your trip before it's gone, and while the excitement is high over this historic boxing event.