Mary Fitzgerald- Selling Sunset Season 3 Is Going To Be Insane

We recently spoke with Selling Sunset star Mary Fitzgerald. In the first part of our conversation, Fitzgerald revealed what fans

We recently spoke with Selling Sunset star Mary Fitzgerald. In the first part of our conversation, Fitzgerald revealed what fans can expect to see in the new season which begins this Friday, and how it would take a lot for her to trust costar Christine Quinn again.

In the second part of our conversation, we discussed who Fitzgerald feels she can trust the most in the cast, if she would ever leave Jason Oppenheim’s brokerage, if the show puts strains on her relationships, and more.

“We’re both from Indiana,” Fitzgerald continued sharing. “We’ve been through marriages, divorces, kids- everything. She is my best friend. I can tell her anything and I know she will always have my back. Always. If I’m wrong, she’ll call me out too, which I love. Her and Jason- they’re very, very loyal. And if I’m wrong, they have no problem telling me. And putting me in my place. Which I don’t like, obviously, but… that’s what a true friend is. Someone that will- that has your back and has your best interest at heart, whether you like it or not.”

So who does Fitzgerald trust the least in the cast?

“Christine [Quinn] and Davina [Potratz] are bordering each other right now,” Fitzgerald detailed. “It would have normally been Davina because of all the stuff she said about [my husband] Romain [Bonnet] that wasn’t true, but I don’t know. Christine, lately, she’s kind of on the same level. I love her, but I just want her to act better.” 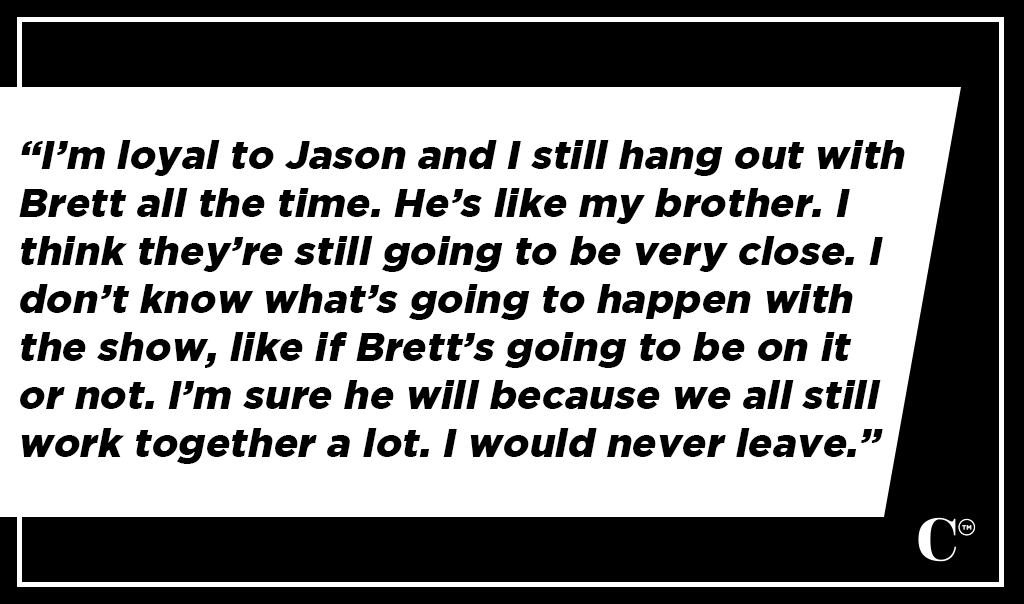 Mary Is Loyal To Jason

We have heard that on this season Jason’s brother, Brett Oppenheim, ventures out on his own to begin his own brokerage. We were curious if Fitzgerald, who had dated Jason in the past, would ever consider leaving Jason’s brokerage for Brett’s.

“I’m loyal to Jason and I still hang out with Brett all the time,” Fitzgerald elaborated. “He’s like my brother. I think they’re still going to be very close. I don’t know what’s going to happen with the show, like if Brett’s going to be on it or not. I’m sure he will because we all still work together a lot. I would never leave.”

Speaking of Jason, a lot of the women tend to feel that he favors Mary in terms of giving her the best listings since they had previously dated. We were curious as to her thoughts on this, and also curious if she thought perhaps he still had feelings for her and that was coming into play.

“He has feelings for me, but just as friends,” Fitzgerald explained. “We’re very close. We’ve always had a special bond, but it’s as friends only and we both have realized we don’t want to date. That wasn’t the right relationship for us. We’re meant to be very good friends. We work together very, very well.”

In response to the other women saying Jason favors her, Fitzgerald stated that “I think it’s funny that the other girls say he favors me. As a friendship? Yeah. I’m one of his very best friends, so he favors me in his personal life. But at work? No. I bust my ass every single day and I get all of the listings you see- and I do more off-camera than on- but I get all of them myself.”

Uncomfortable Pressure On The Fitzgerald Marriage

We also were curious as to the strains Fitzgerald thought being on the show had put on her relationship with her [now] husband, Romain.

“For the wedding, it definitely caused pressure because he was so adamant about Davina not coming and I knew it was just going to cause issues for me at the office,” Fitzgerald began with explaining. “And it was just uncomfortable. I don’t like being mean to people. I don’t like being [the one to] hurt people’s feelings. Even if I understood- I did understand his point of view, and I agreed with it- but it still kind of makes me cringe to make someone feel bad. And I knew by inviting everyone but her that would make her feel bad.”

“She made her own bed,” Fitzgerald added, “but still I don’t like doing that. So that caused tension.”

Fitzgerald had more to say on strains the show has put on her relationship, explaining that “Just in life. There’s been ups and downs, not really with the other castmates, but we’re just so busy and haven’t really had the time. We never got to go on our honeymoon and we work non-stop. So we just need a break. We need a vacation.”

“We were filming for like eight months,” Fitzgerald also noted. “That was a long time and we delayed our honeymoon and then moved our honeymoon up after we were done filming to make sure we could go to Bali and then they shut down the borders and they turned us away at the airport so we never got to go. Life is- we are stuck at home. He and I are both working 15, 16 hour days. We just need a break. We need to lay on the beach and have a Pina colada or something.”

Selling Sunset Has Been 100% Positive

Fitzgerald also explained to us that being on the show has “absolutely’ had a “100% positive” impact on her business.

“We just got an accepted offer last night on a condo that I got the business from the show,” Fitzgerald shared. “The boyfriend is in real estate and watches the show and said that she should contact me. He thought I’d be the best.”

“I’ve gotten so much business right now I can barely keep up,” Fitzgerald added.

Has Fitzgerald ever had any fans of the show try to  get to her by pretending they want to be a client, though, with their true intention being only to meet someone who is on reality TV?

“Yeah,” Fitzgerald shared when asked this question. “I have my assistant vet people very, very well. There’s a lot of people that do just want to- I don’t understand why- they’ve got too much time on their hands I think- but people will submit fake proof of funds. They’ll do all kinds of stuff. So we have to really dig and make sure that people are legit and I’m not wasting my time.”

However, Fitzgerald did note she has never gotten any real hate or creepy people on social media trying to contact her.

“I swear I am so lucky,” Fitzgerald noted, “because I know some of the other girls have had these creepy guys and stuff. I have just had- as far as I know, I’m not on social media like the other girls are- but I’ve had really sweet messages. I don’t have people that are hating on me that much. People are just very, very nice and complimentary. I’m grateful and I hope that never changes… I just have fake buyers. It’s probably more annoying because that’s wasting my time even more.” 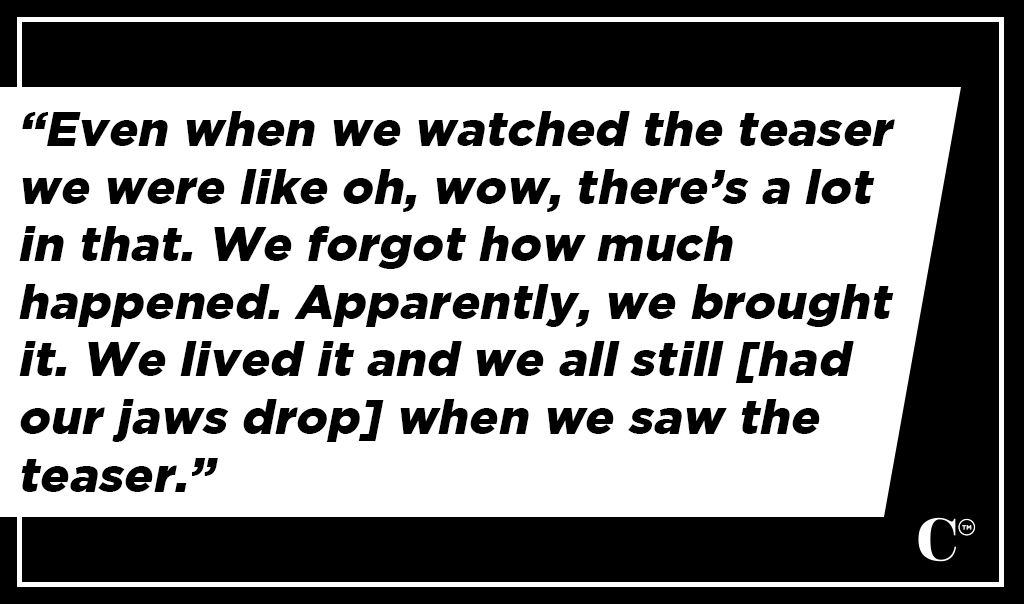 Season 3 Is Gonna Be Insane

“Even when we watched the teaser we were like oh, wow, there’s a lot in that,” Fitzgerald added. “We forgot how much happened. Apparently, we brought it. We lived it and we all still [had our jaws drop] when we saw the teaser. Jason, Chrishell [Stause] and I got on the phone after we all watched season 2 and with the teaser for season three we were like, holy crap. That’s gonna be insane. We just forget and when you condense everything that happens in all of our lives into eight epodes that filmed over months and months, you get some pretty juicy stuff… it’s all real. It’s just condensed down.”

We look forward to watching the new season of Selling Sunset when it drops on Netflix this Friday. It certainly sounds like we’re going to be in for quite the ride.