Have you ever looked in the mirror and something jumped out at you; maybe it was a wrinkle, the shape 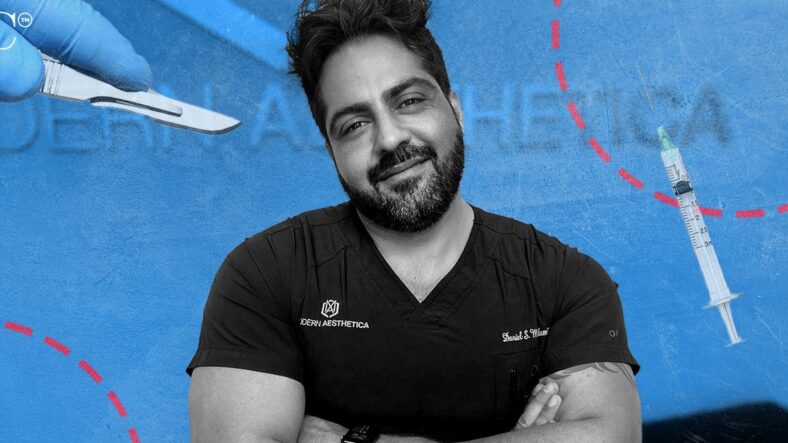 Have you ever looked in the mirror and something jumped out at you; maybe it was a wrinkle, the shape of your nose, age beginning to show through your jawline, sagging skin or something else. The signs of change and aging happen to all of us, and sometimes it can hit you all at once like a slap in the face when you look in a mirror; suddenly, you feel older. Maybe you work in a competitive career where signs of age become a liability, or maybe you just aren't ready to feel the years you've lived. The reasons people seek cosmetic procedures and surgery are myriad; everyone has their own story. But whether your motives are pure vanity, career-oriented or anything else – everyone gets to choose what they want to do with their own body.

For doctors like Modern Aesthetica's Dr Daniel Moghadam, helping people achieve the look they desire is a calling. While cosmetic surgery for years was looked down on and scoffed at, public consciousness has begun to accept that people have the right to choose what they do with their own body, and sometimes that means altering it – yes, even for pure vanity. Now that society is beginning to embrace the concept of bodily autonomy and shed the notion that seeking cosmetic procedures is unhealthy, doctors are needed who can artistically sculpt and change those bodies. For Dr Daniel Moghadam, each patient has their own unique journey and needs – and whatever they are, he will use his skills to best help them travel that journey. CELEB sat down with Dr Daniel to discuss some of the most popular procedures – including male enhancement, thread lifts and more – as well as why more people are opting for less-invasive non-surgical procedures.

It's a revealing peek behind the curtain of cosmetic medicine and who these people are that are helping patients achieve the look they dream of.

The male enhancement industry is – no pun intended – a huge one. Most involve supplements that make big promises, but deliver little to no results. At any gas station across the country you can find those gold-foil pills that promise to increase size and performance – but in reality, won't do much beyond maybe upsetting the stomach.

Cosmetic surgery, however, has discovered a way to provide actual results. In a procedure that does not require anesthesia, Moghadam injects a product similar to Sculptra. The body then eats away the bioactive injectable and replaces it with a permanent layer of collagen. Moghadam explains, "You get an inch thicker, and anywhere from half inch to an inch longer." The downside is 32 days of complete abstinence. Moghadam jokes that a lot of men think that the procedure is easy – and it is – but abstaining for a full month is another matter entirely.

When asked how prevalent patients seeking male augmentation are, Moghadam answers, "With these kind of results, it's kind of catching fire. I've been doing it for about 3.5 years now and I would have to count but I think I'm right around 3,000 patients now. I thought I would do 6 to 8 of these a month, I didn't think the demand was there. But I'm doing 40 to 50 a month and I have a waiting list 3 or 4 months long. If I wanted to, I could tilt my business that way and do those procedures exclusively and have a full business."

The benefits of this enhancement procedure include the fact that it feels and acts just like tissue, sensation is not affected, and it doesn't mess with fertility.

Of course, Moghadam enjoys performing other procedures so that won't happen, but it's a fascinating peek into how much need and desire there is for this procedure and how underserved this aspect of cosmetic enhancement has historically been. Using the proprietary blend of bioactive injections, the patient's body works with the procedure.

A Doctor Who Can Do it All

The key to Moghadam's success and his patients' satisfaction is that he individually tailors everyone's treatment to their needs. On Modern Aesthetica's website, they share his bio which shows a well-rounded physician who has a sincere passion for fitness and health that goes beyond what looks good; he wants his patients to feel good too.

"Dr. Moghadam is a Southern California native who completed his undergraduate studies at the University of California at Los Angeles, graduating in 2001. He then graduated from the prestigious Ohio State University College of Medicine and Public health in 2005. He continued his education with Cornell University’s Weill Cornell Medical College Affiliate program and graduated in 2009.

Dr. Moghadam returned to Los Angeles in 2009 and has since served as a top-performing emergency room physician in the greater Los Angeles area. In 2014, Dr. Moghadam completed his fellowship in anti-aging and regenerative medicine from the American Academy of Anti-Aging and formed his integrative aesthetics practice. Dr. Moghadam is a certified master injector and a fellow of the International Peptide Society.

Dr. Moghadam offers life-changing solutions to health care problems with a unique 'outside of the box' perspective. His comprehensive approach and state-of-the-art medical center allow him to use cutting-edge testing and perform in-depth analysis on his patients. This enables him to confidently create restorative treatment plans exclusively tailored for each patient."

That means every patient at the practice benefits from Moghadam's experience, skill, and thoughtful approaches to every opportunity. Science and skill come together to provide options tailored to the modern era of bodily autonomy and exploring our cosmetic potential.

Face Threading; Less Invasive Than Surgical Face Lift and Almost no Down Time

Another procedure that Moghadam finds exceptionally popular – and one he personally prefers to traditional surgical face lifts – is thread lifting.

With PDO thread lifts, small sutures are placed under the skin – no anesthesia necessary – and the body replaces them with collagen to provide lift results that look natural and last several years. "The majority of people don't want the downtime of surgery anymore. And for instance if you get a nose job – like a real deal nose job – you have no idea how your nose will look for 6 to 8 months due tot he healing process, until the swelling goes down. So if you have minor imperfections in your nose and you want something done, threat lifts allow you to make those tweaks and know what it's going to look like immediately after the procedure."

The thread lifts only last around 18 months, but with no downtime and 1/3 the cost of a surgical procedure – it's easily maintained. Moghadam adds, "If you combo the thread lift with a tiny bit of filler, it's safer than a full nose job and you get a better result that lasts." Moghadam's patients come from all age ranges, but what they're looking for may vary slightly. For instance, the 30 and 40 year olds may want to address mild skin laxity and shave a few years off their list. Older patients may want a full face lift. Patients in their 20s may just want to shift some angles around.

Over the past 18 months, Moghadam explains that he's seen a lot of people complain about the tired lines around their eyes and lips, and the thread lifts can combat that without the risks of surgery.

Another procedure reaching a fever pitch right now is designer nipples. Some patients want the subtle look of a nipple showing under their clothing, and Moghadam says that a little well-placed filler can achieve this look. "It's pretty painful and it takes a lot of skill, but it can give patients the look they're aiming for."

Brazilian Butt Lifts (BBL) are also a popular procedure. It involves liposuctioning fat from elsewhere and injecting it into the buttocks region to give a filler, firmer look. It comes with significant risks, but over the years the procedure has gotten safer.

Natural vs Extreme – Why Non-Surgical Cosmetic Procedures are Gaining Traction

Moghadam adds, "When you look at it like that, you can cater your treatments a little better to your patients when you're in a non-surgical realm versus when you're doing surgery where you have no idea how it's going to turn out today. Plus, I have massive ADD so it works to my advantage. It works to both my advantage and my patients' advantage because I can do a procedure and see what it's going to look like at the end of the procedure. No waiting." The doctor laughs, "I don't like the idea of doing a procedure and hoping it will turn out well in three months. It's just not my personality."

Other procedures offered by Moghadam and his stellar team include:

Plus so much more.

At Modern Aesthetics, patients can feel confident that they're under the hands of a doctor who is not only passionate about what he does, but skillful, practiced, and on the cutting-edge of science.