Monique Samuels Trainer Rumors Get Charrisse Forced Off The Show 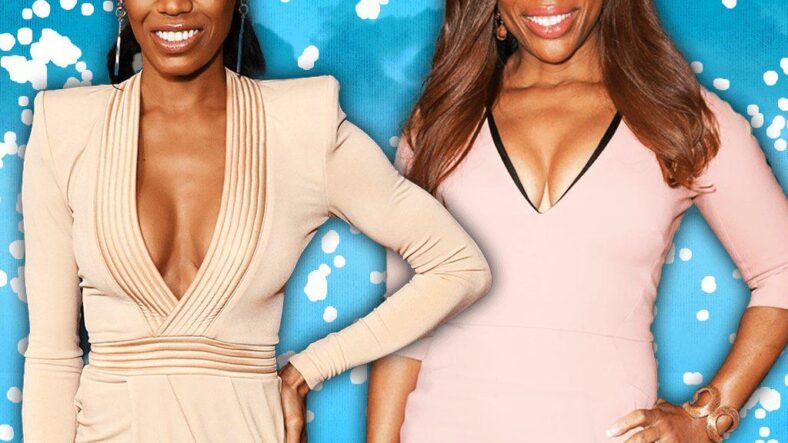 The Real Housewives of Potomac just began last Sunday and it already looks like this is going to be quite a dramatic season. As fans have known before the season started, a massive fight between Monique Samuels and Candiace Dillard Bassett took place during filming and that is what the season is leading up to.  However, even with the beginning of the season, there appears to be drama.

The Rumour About Monique’s Trainer

On Monday evening, the second episode was aired on Twitter for an exclusive viewing party. In both episodes 1 and 2, Charrisse Jordan– who was a cast member on the first few seasons of the show- made an appearance and was discussed. Samuels mentions at one point that she is not a Jordan fan due to Jordan spreading rumors about her she didn’t want to discuss. Cast member Gizelle Bryant, though, decided to pipe in and share what these rumors were. Specifically, Samuels was allegedly mad at Jordan for Jordan “spreading rumors” about Samuels being spotted out and about with her trainer which supposedly made Samuels’s husband angry.

There’s More To The Charrisse Story, Though…

We spoke to two insiders close to the Potomac ladies- and they had quite a different story to tell; in fact, their stories claimed that Samuels worked to ensure that Jordan would NOT be a part of the show even though Jordan was not actually the one spreading the rumors about Samuels. 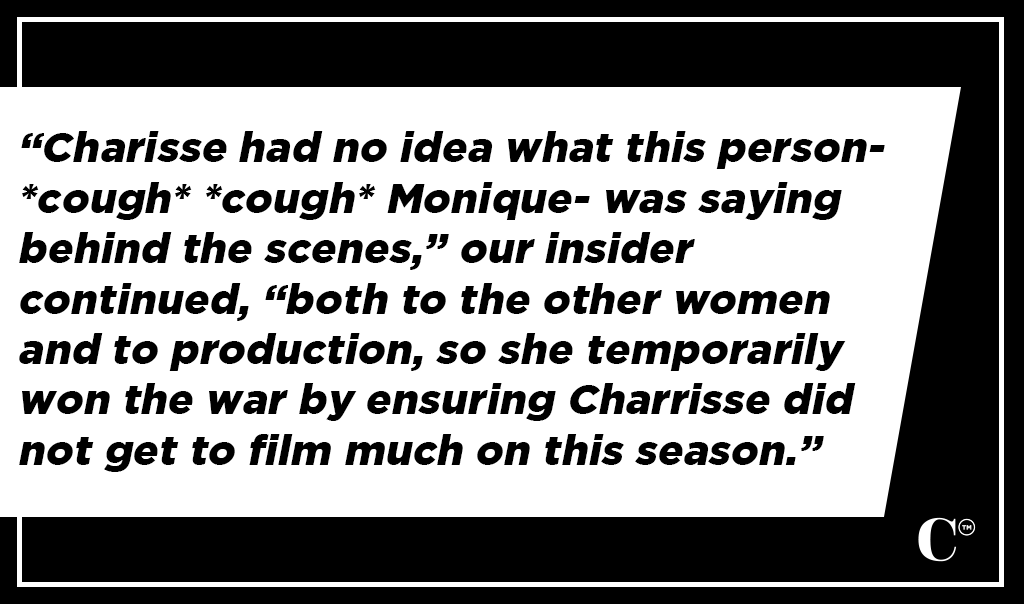 Our first source began with detailing that “While Charrisse wasn’t a full-time cast member last year, she was one of the original women on the show. When she started coming around for filming this year again, things looked promising that she would return as a friend of the Housewives, which was something she was open to; however, one of the women on the show decided to do everything in their power to ensure this didn’t happen due to a personal vendetta against her.”

“Charisse had no idea what this person- *cough* *cough* Monique- was saying behind the scenes,” our insider continued, “both to the other women and to production, so she temporarily won the war by ensuring Charrisse did not get to film much on this season.”

Our first source went on to explain that “While Monique has held fast to the claim that Charrisse was talking about her- specifically stating she was spreading a rumor about her that Gizelle confirms in episode 2 has to do with Charrisse stating ‘around Potomac’ that Monique was spotted out with her trainer and Monique’s husband got mad- this simply isn’t true.”

So who was spreading the rumors about Samuels and her trainer?

“It was actually Monqiue’s best friend of 20 years who was spreading the rumor,” our insider confirmed, “and that’s why they’re no longer friends.”

Our source also went on to add that “Monique sent her former best friend a cease and desist, but Charrisse didn’t get one. If Charrisse was spreading this ‘vicious rumor,’ why didn’t she receive one? Things that make you go hmm, right?” 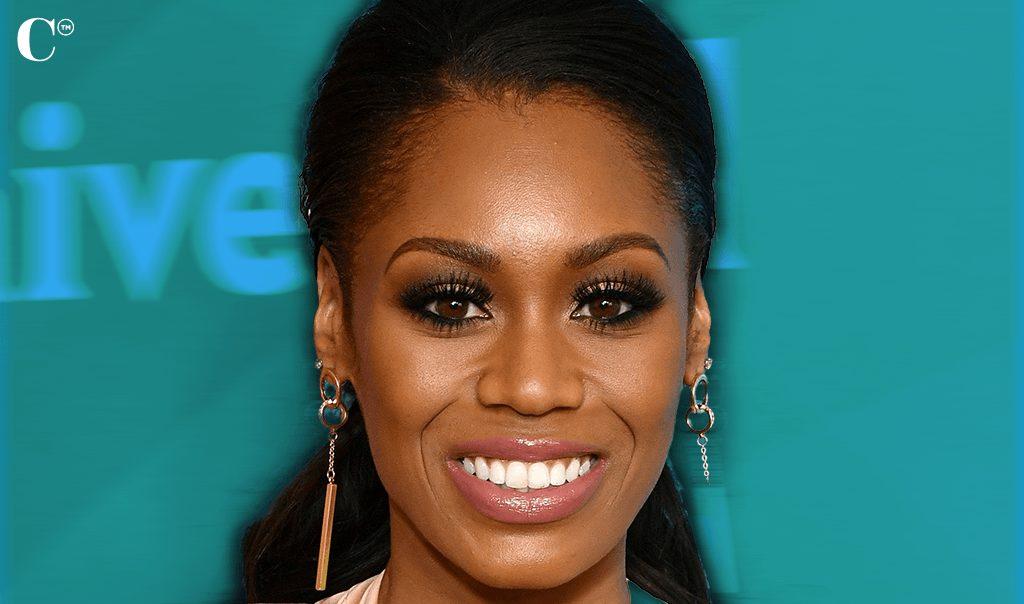 The ‘Word On The Street’

“So why did Monique have a beef with Charrisse then, you may wonder?” our initial insider stated.

“Monique was worried that Charrisse would tell the rumor on the show,” our first source specifically stated, “so she worked to ensure Charrisse’s time was limited on the show. Gizelle ended up outing it regardless, though. Of course the way she did it was creative, trying to act like she was just sharing the ‘word on the street,’ but we all know Gizelle can be messy and wanted that rumor out.”

“For what it’s worth,” they added, “Monique’s ex-best friend and Charrisse are friendly. That’s really why Monique was probably worried about having her on the show. In her real day to day, Charrisse is far too busy living a fabulous life to even think about Monique.”

We spoke with a second source who confirmed everything our initial insider told us.

They had more to add, stating that “It was surprising to the women that Charrisse was being blamed for the rumor, as the rumors were already out there for quite some time. They never repeated it, but seeing as Monique decided to pin it on Charrisse, it was only inevitable someone was going to out what it was.” 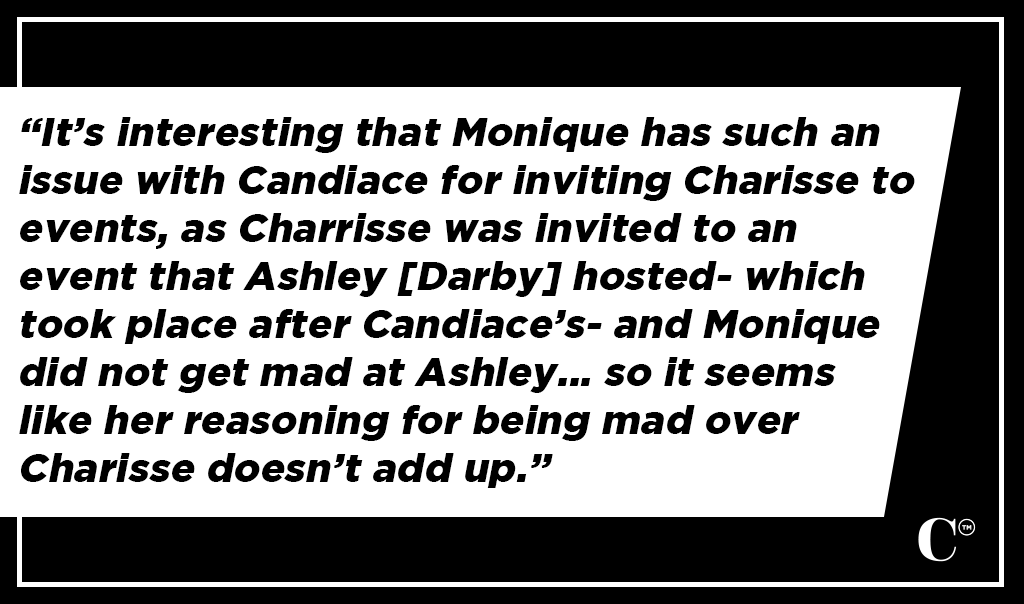 Our source also noted that “It’s interesting that Monique has such an issue with Candiace for inviting Charisse to events, as Charrisse was invited to an event that Ashley [Darby] hosted- which took place after Candiace’s- and Monique did not get mad at Ashley… so it seems like her reasoning for being mad over Charisse doesn’t add up.”

Since we are only two episodes in- technically one if you didn’t catch the Twitter viewing party- there is a lot more drama to come this season on The Real Housewives of Potomac. Make sure to stay tuned, as we will have more exclusive news to share with you as the season continues to progress.

The Real Housewives of Potomac airs Sunday nights on Bravo at 9 PM EST.