As CelebMagazine previously reported in part one, two, and three of its six-part series, Rafa, a fully-fledged member of MS-13 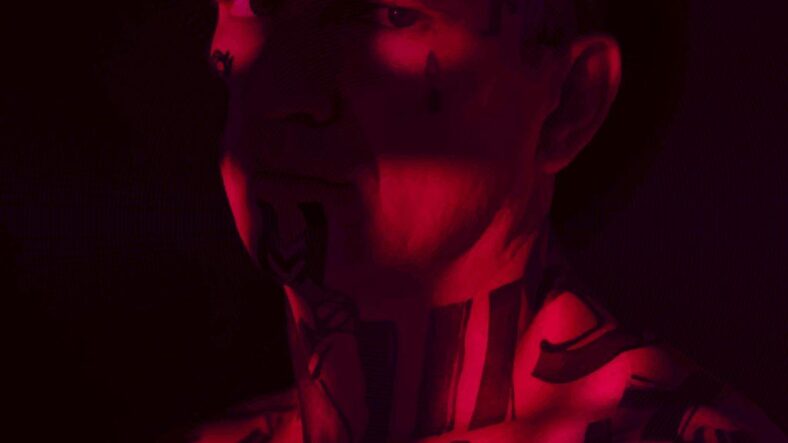 As CelebMagazine previously reported in part one, two, and three of its six-part series, Rafa, a fully-fledged member of MS-13 the world’s most notorious & violent gang, was sent to jail for eleven-years after he pled out to charges of voluntary manslaughter for shooting an unarmed man dead.

It was prison education 101 and Rafa learned a lot—like how to make pruno, and create shanks & locks in socks to use as weapons.

Rafa, who was 18-years old at the time, was sent to The Men’s Central Jail in downtown Los Angeles, where he spent the next six years of his life behind bars, before eventually being released early, for “good behavior”.

The facility is notorious for its overcrowding, violence amongst inmates, poor living conditions, and the staff’s heavy-handed tactics and restraint procedures, so it’s little surprise Rafa’s jail lessons were pretty damn intense.

By the time I first met Rafa in Mexico City, he hadn’t long been out of jail, having been deported back to Mexico following the completion of his sentence. So, it wasn’t shocking that he was still struggling to adapt to life on the outside, the effects of incarceration—physically, mentally, and emotionally—and adjusting to being forced to live in a country he had left when he was just a tiny baby.

Rafa learned a LOT while he was inside—but because it’s 2020, and people these days have an even shorter attention span than goldfish (nine seconds for little orange carps, just eight seconds for human beings according to a recent Microsoft study—I’ll concentrate on the sensationalist and shocking parts, because that’s what people want these days, right?

Inmates are renowned for their imagination when it comes to working out how to get around the rules—well, when you have that much time on your hands it affords you at least the ability to plot, think and experiment.

Alcohol is amongst one of the many things forbidden in jail, for obvious reasons—but, no bottle service, no Drizly deliveries?—no problemo!

Jail-made moonshine is commonly referred to as “pruno” or “chalk” and according to Rafa it’s super easy to make, guaranteed to get you totally wasted in no time at all, but is “an acquired taste”.

“Depending on who’s made it, and how, it usually tastes like a really, really shitty vodka sort of thing, but like the worst and cheapest vodka you could imagine, ever—well, at least at first, then you get a bit more used to it, kinda,” Rafa explains.

“But no matter how good you are at making it, it’s never gonna be like a Grey Goose or even a Tito’s. But it’s strong dude, it’s really fucking strong.

“Once it’s ready, usually you pour it into a bucket, drop a mug in, fill it up and chug it back in one. You drink it as fast as possible to finish it and not risk a ticket. Most people either throw-up the first time, or at the very least feel like they’re going to vomit their brains out. But once you get over that you get a really heavy buzz man, you’re shitfaced.”

So, how do you make this delicious and delightful beverage, which makes Four Loko look positively like a perfectly chilled bottle of Dom Pérignon Rose Gold?

“It ain’t rocket science,” Rafa says, laughing. “There’s a ton of different ways to make chalk, but the most common is to mix fruit juice with some sugar—or anything that includes sugar like jello, soda, or candy, then add yeast, which you can get from adding bread.

“You can shop the store [prison commissary] for everything needed, or bribe a brownie [kitchen worker], then you throw it all together in a big plastic bag, tie it, shake it and hide it somewhere behind the cot in your crib to rot.

“Every day or so you need to ‘burp’ it by opening up the bag and letting the pressure that’s built up out, then you tie it up again and hide it back in the alley. It’s ready in about three days, so it really is that easy, the only thing you gotta watch out for is a shakedown—cos if you’re caught with hooch you’ll end up in the box.”

How to weaponize—411 on shanks, shivs, locks in socks & even cans

Prisons and jails are packed full of materials that can be used to craft into a weapon of some type—if you’re unable to get someone from the free world to smuggle one in for you (more on that later).

Both shank and shiv are slang for a jail-made knife of some type and used as a noun and a verb. They can cause serious damage, leading to potentially dangerous and fatal infections, and even causing instant death if aimed at the right area of the victim’s body, stuck deep enough or employed a sufficient amount of times.

There’s a wealth of everyday items ready to hand inside facilities that can be transformed into a makeshift and effective deadly dagger with the minimum of effort.

“Oh dude, there are so many simple ways to make a bone, it’s unreal. I’ve seen ones made from toothbrushes that have been sharpened to a long point; ones made from toilet paper; melted down Styrofoam cups; plexiglass that’s taped onto a handle—and even scored sometimes so it’s more likely to break off in the body or face and leave the stem in the perp’s hand to dispose of later; sharpened chicken bones; and even matchsticks glued together then sharpened into a point.

“What’s even more fucked-up is I once saw a carnal [another incarcerated gang member] smother his own shit over the end of some shiv he’d made, to make sure his target would get a real bad infection when he was stuck.”

It’s not just home-made knives that are a potential cause of danger though, even something as simple as a candy bar can be weaponized.

“If you get candy from the store, like a Mars or a Snickers bar—something with caramel—then melt it down, you can throw that straight at somebody’s face,” Rafa explains. “It’s got to be real hot though to cause the most damage because then it really burns. Best of all is that it turns hard again real quick, so it’s difficult and slow to remove and usually rips off a chunk of skin with it.

“Probably the easiest and fastest of all to make though is a lock in a sock, which is exactly what it sounds like—you get a padlock—or anything else that’s small and heavy—the heavier the better, then you drop it into a sock, tie the bottom off around the lock, and you’re good to go. It might sound like not that much, but you can smack somebody round the head hard enough with it to friggin’ split their skull right open like a melon, real easy.”

“Probably the worst of all though is when somebody gets canned,” Rafa continues. “I never actually saw it happen, but a celly did and told me about it.

“His homey bought a can of beans from commissary, hacked the lid off nice and rough, so it had a real sharp and jagged edge, then shoved the can deep in some crepa’s cheek. Homey pushed it so hard the can went flat, and he even twisted it around a few times before he got pulled off by a C.O. That’s some fucked-up shit man, that’s gonna cause serious scars.”

“I even heard about one dude who made a pair of nunchucks so he could go all Jackie Chan on some punk’s ass—he used two chair legs he’d smuggled out of woodwork class and attached them with a bed sheet he’d torn and rolled tight.

“Then there’s spears, they’re actually pretty easy to make too, you just need to remove one of the metal legs from a bunk and then sharpen-up the end.

“And they’re real bad because you can throw them at the hit from like, 20 feet or more,” Rafa concludes.

Just a few minutes of googling brought up some even crazier weapons that inmates have constructed.

One prisoner, who was being held in solitary confinement at the time, managed to make a fully functioning crossbow out of ten toothbrushes, a pair of tongs, string, a cigarette lighter, a pen casing, a wire coat hanger, pieces of rubber gloves, some Kleenex, string, some electrical components, and a few screws.

With darts made out of tinfoil and cotton swabs, the improvised crossbow was capable of shooting from a distance of up to 40 feet. 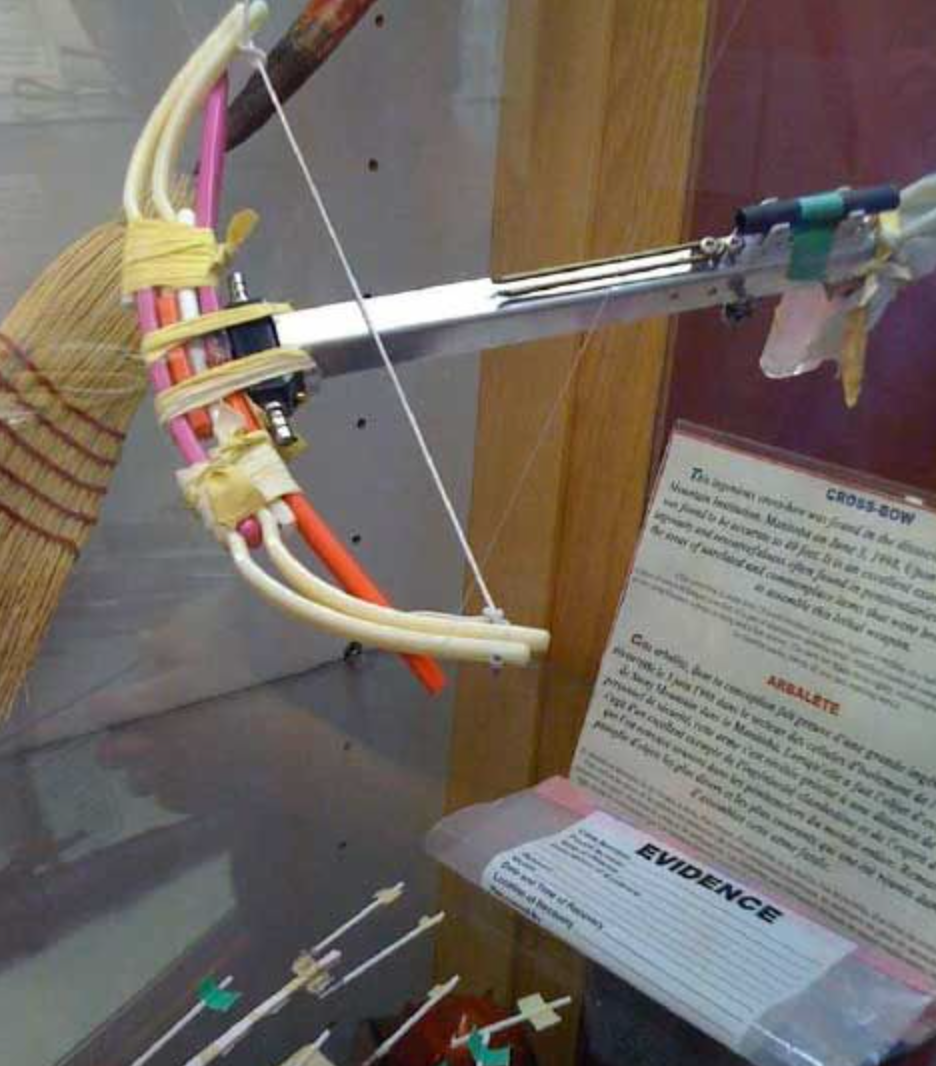 Most mind-boggling of all is how the hell did he get his hands on all those items while he was on lockdown in the SHU?!!!

Last, but certainly not least, there’s the case of Peter Saunders, an inmate who had been convicted of murder, but appeared to be determined to make the most of his time behind bars.

According to the Chicago Tribune, instead of playing cards or chess with fellow prisoners, Saunders whiled away the hours by constructing a fully functioning bomb, that he then sent to the judge who had thrown-out a civil lawsuit he’d filed.

To exact his revenge Saunders rigged a hollowed-out book with a battery, wires, and a felt-tip marker pen packed with ground-up sulfur salvaged from matchsticks.

The crude but effective explosive wasn’t powerful enough to blow a building up, but it could have caused an explosion and a flash fire if it hadn’t been detected during a security scan before entering the courthouse.

A terrible criminal act? Most definitely! A pretty impressive feat of ingenuity? I’d say yeah. Absolutely totally stupid? Well, given the fact Saunders is now looking at an additional 50-years being added on to his existing sentence, then, yeah, that’s pretty, pretty stupid.

Aside from his crash course in yet more ways to commit a murder, like he didn’t know enough on that subject already, Rafa learned a whole load more during his time inside.

The then-teenager learned, participated in, and witnessed things that would make the average Joe Schmo crawl up in a corner and just pray to die, quickly and painlessly.

The official line when it comes to incarceration is that “Prisons have four major purposes. These purposes are retribution, incapacitation, deterrence, and rehabilitation.

“Retribution means punishment for crimes against society. Depriving criminals of their freedom is a way of making them pay a debt to society for their crimes.”

However, the USA has one of the highest recidivism rates in the world, with 83 % of ex-prisoners being re-arrested, re-convicted and re-incarcerated during the 9 year period following their release—so, you’ve got to ask, how’s that whole “rehabilitation” thing working out for everyone?

The USA also has the highest incarceration rate by far, with 655 out of every 100,000 civilians being imprisoned, followed in second place by Turkey, at 355, so once again, you’ve got to ask, how’s that whole “deterrent” thing working out?

As for the price inmates are forced to pay for their crimes, we’ll leave it up to you to decide if it’s a fair one or not, after you read our next installment:

Meanwhile, keep coming back to CelebMagazine.com for more exclusive and in depth coverage of all the hottest news, pop culture, crime, and sports-related stories of the day.