Inside MS-13 World’s Most Violent Gang: Back To The Barrio After Jail

Rafa was released from Men’s Central, Downtown LA in 2018, after serving six of an eleven-year sentence for voluntary manslaughter. 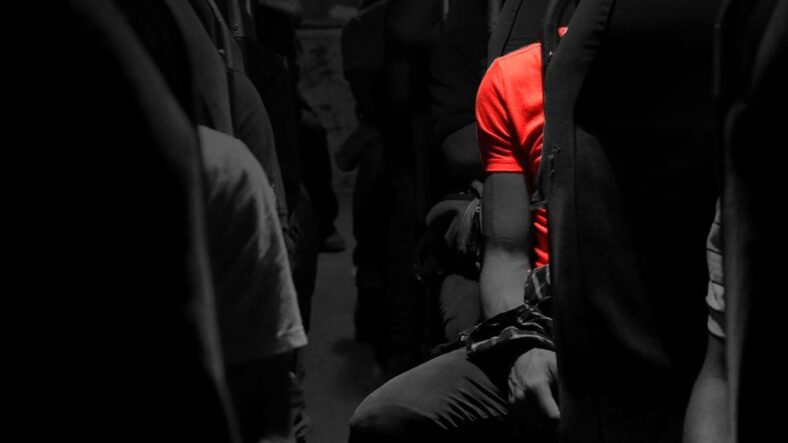 Rafa was released from Men’s Central, Downtown LA in 2018, after serving six of an eleven-year sentence for voluntary manslaughter. He was 24-years old, and as for most incarcerated non-citizens, especially when you’re a member of the MS-13 gang back to the Barrio for life after jail was Rafa’s only (enforced) option.

The fully-fledged homeboy had only been a 6-year-old child when his “grooming” started, and by the age of 8 he was all in with MS-13, the organized crime organization that’s notorious for being the world’s most violent gang, with the motto, “Kill, Rape, Control.”

Rafa had never raped anybody—well, as far as I believe anyway—and although he doesn’t present as controlling, he certainly appears to have the ability to be so if required. But, he had definitely killed—on more than the one occasion that resulted in his arrest.

He had definitely done the crime, and now he’d served the time, but Rafa wouldn’t be heading back home to see his sisters and friends, in fact, he would likely never be able to see his friends, sisters, or nieces and nephews, ever again.

For Rafa, life after jail would prove to be even tougher than most inmates’ experience post-release—which is already, pretty bleak and hopeless.

Rafa had been itching to get out of jail, so, as soon as he was told he was “shipping out” he didn’t waste a minute. Rafa was packed-up and gone from his cell faster than a Pabst Blue Ribbon at a Nascar race.

However, Rafa soon realized he wasn’t going to be back out in the world as a free man again, for quite some time. After being transferred to the Twin Towers for his tedious and lengthy release processing, he was ordered to wait in a room and then taken into the custody of ICE.

Rafa was hit with a serious case of Detention Déjà Vu, as he was fingerprinted and photographed again, locked in another room and after hours of kicking his heels, given a “Los Angeles County Sheriff’s Department Notification to Inmate of Immigration Detainer Interview” form. 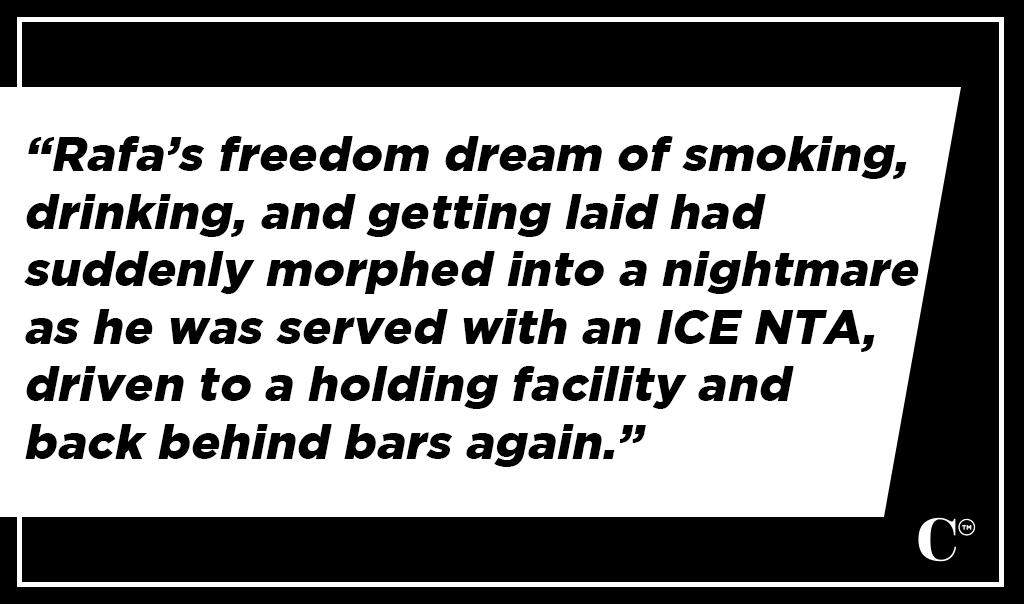 It’s a legal requirement for ICE agents to hand them out, and it offers detainees two choices—agree to be interviewed by Federal agents or decline. Given Rafa’s background and street smarts, it’s little surprise he chose the latter.

So, just like that, Rafa’s freedom dream of smoking, drinking, and getting laid had suddenly morphed into a nightmare as he was served with an NTA, driven to a holding facility and back behind bars again.

It turned out the Notice to Appear was just a formality, because Rafa wasn’t even given the right to appear in court to fight his deportation—even if he was able to afford an attorney to represent him. Due to the severity of his crime, authorities had already issued a “removal order” so Rafa was going from California life in the MS-13 gang back to the Barrio, Mexico.

Within 24-hours, Rafa was marched onto a bus, driven to The San Ysidro Port of Entry Border, near San Diego, and dumped on the roadside. He had only $1.27 in change – what he’d had in his pocket at the time of his arrest in 2002 and the clothes on his back.

Rafa was told never to return to the USA again and escorted to the border where he was forced to cross over into Tijuana, Mexico.

From MS-13 Gang Back To The Barrio

Rafa had been just a baby when his mother illegally crossed the border with him and his two sisters, fleeing Mexico City and their abusive father. Before jail, he’d spent his entire life in Pico-Union, California and although he could speak fluent Spanish, he definitely identified as being more “American” than “Mexican”.

So, to say arriving in Tijuana was a culture shock for the newly-released inmate, would be somewhat of an understatement. “Oh man, it was just the worst dude. I just felt dizzy, like, I was gonna throw-up, and I couldn’t breathe,” Rafa says, explaining his initial reaction to landing back in Mexico.

Rafa was met by Mexican officials on the other side of the border, who escorted him to a facility. Rafa was “processed” and then, he was set free.

“I’d literally just finished a six-year bid, and I’m dumped in fucking Tijuana, everything just felt crazy intense and too much to deal with. I couldn’t even think, I had to go sit on the curb for like an hour before my brain even began working again. I was just totally numb, I didn’t have a fucking idea what to do, or where to go.

“It was worse than walking into jail,” he continues. “I’d lost everything, everyone, it was all gone. I’ve never felt so lonely and so fucked-up in my life, I was like, scared, for the first time ever, like the first time ever I felt truly powerless and alone. It was the worst moment of my life.”

Given the fact he had next-to-no money, no phone, no official documentation to prove he was Mexican and didn’t know a single person in the state, let alone the city, Rafa figured his best option was to find somewhere to bed down for the night.

As he was walking into town, Rafa spotted somebody with MS-13 tattoos all over his arms and face. The two started talking and the man told him to head down to El Bordo, an area next to the Tijuana River where a lot of deported homeless sleep.

“Oh man, Cartolandia,” Rafa says, using the nickname for the shantytown, which translates as “Cardboard Land”. “It was worse than jail, for real, that place is off the hook. Junkies, cons, crazy people, drunks….used needles all over, trash everywhere, and just loads of make-shift shelters people have built. It’s like Skid-Row, but way more crazy.

“All the ‘best’ places were claimed, but I managed to find an empty spot in this huge sewer pipe that’s there, so yeah, that’s where I slept, and it stank, like, really stank. My first night of freedom was shit. Like, it smelled like shit and looked like shit and felt like absolute shit.”

According to WOLA, an organization that advocates for Human Rights in the Americas, makeshift camps like El Bordo, provide a fertile hunting ground for predators, cartels, and other assorted organized crime groups. WOLA reports that 36 percent of migrant disappearances in Mexico occur on the Northern border, thanks to human trafficking, enforced labor, slavery, kidnappings, and murders.

Rafa’s first thought, when he woke up the next day, was how to earn some money. He knew he was going to have to hustle if he stood any chance of ever getting out of the sewer—literally—and there was one thing he knew he had mad skills for—slinging dope. 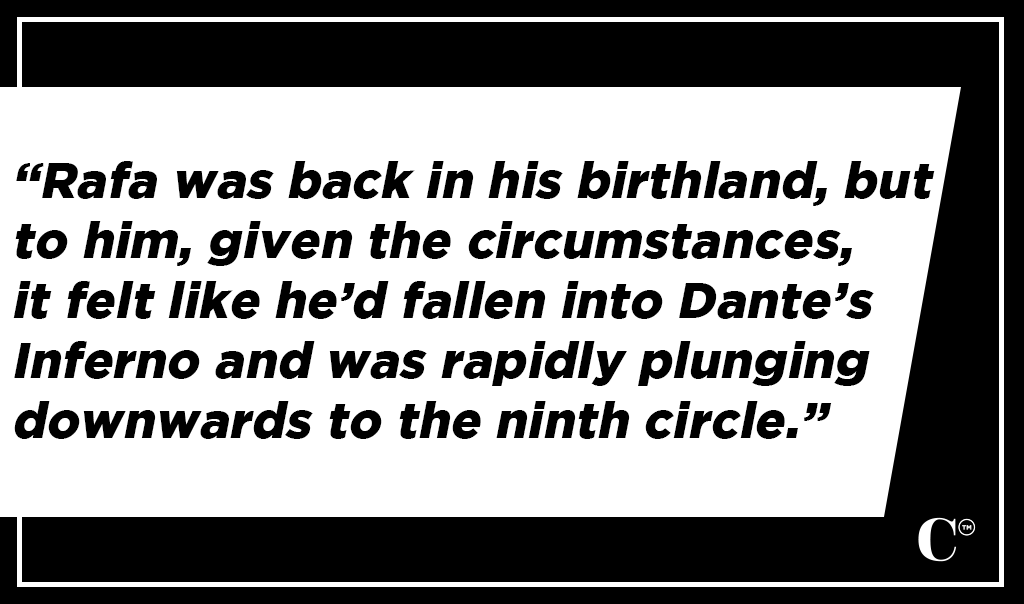 “I hooked-up with a homie there and he let me sell for him, but dude, I couldn’t make enough money to even eat properly, let alone get on a bus,” Rafa explains. “And, OK, yeah, I’ll admit it, I ended up taking most of the chalk myself, and even some of the H, so, yeah, that didn’t help much,” he confesses, laughing.

Rafa was back in his birth land, but to him, given the circumstances, it felt like he’d fallen into Dante’s Inferno and hit the ninth circle. He couldn’t go any further down from there.

But, life has a habit of tricking you, and just when you think you’ve hit rock bottom, it punches you right in the face again. Rafa was about to learn that lesson, the hard way—on the day the Mexican Federales raided the camp.

Rafa had gone from his life in the MS-13 gang back to the barrio—via a 6-year stint in jail—and within days, he was in handcuffs once again…so much for “freedom”. Rafa was going to have to really up his game if he wanted to get out this one alive.

Keep reading CelebMagazine for the next installment of Rafa’s story.