Conor McGregor Picks a Fight with MGK at the VMAs – or Not?

This just in: MTv still plays music videos. Who knew? Although, we’ll have to take their word for it since

This just in: MTv still plays music videos. Who knew? Although, we’ll have to take their word for it since we haven’t caught a music video on MTv since the days of Carson Daly. Which means we’re old, but it also means that MTv has been branching out in recent decades. Yet every year, they host the VMA – Video Music Award – show, and celebrate something. Ostensibly, music videos.

Anyway, that shocking revelation aside, this year’s VMAs were a revelation unto themselves. If that revelation comes in the form of that weird family reunion that everyone agrees to pretend never existed because Aunt Stella showed up wearing a gimp mask and Uncles Bob and Tony threw hands in the buffet line. What? Yep – so lets recap. 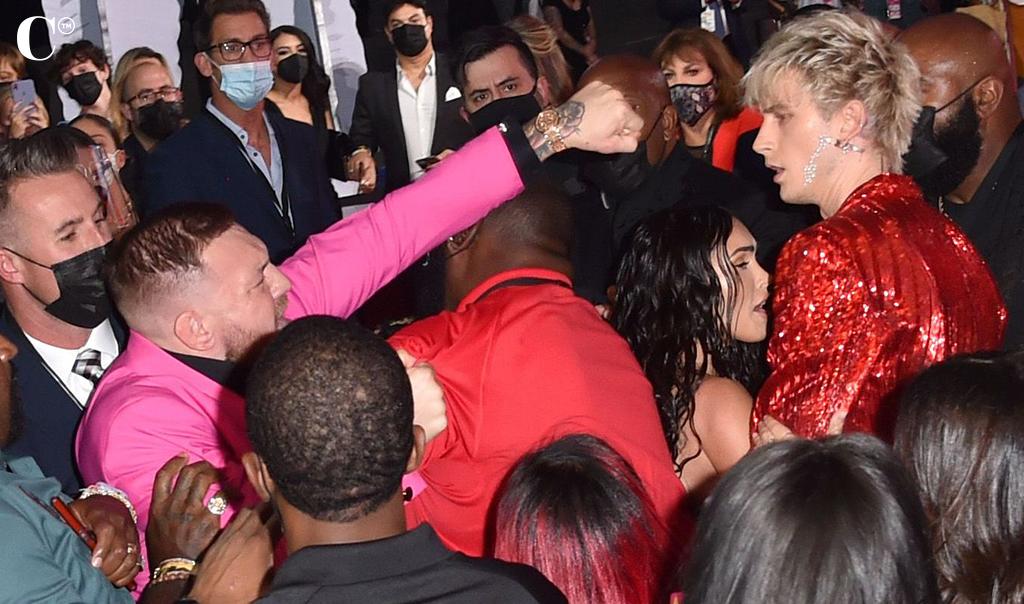 So, first let’s get to one of the moments everyone is buzzing about. On the red carpet, things were moving along smoothly – if a little weird – when suddenly a fight broke out. The culprits? UFC champ Conor McGregor – a likely suspect – and …Machine Gun Kelly? While MGK isn’t known for shying away from fights, he’s been pretty mellow since falling in love with Megan Fox.

So what happened? No one seems to know exactly, and McGregor’s representative is denying that the fight happened at all – despite photographic evidence, saying that the UFC fighter only fights other fighters. Sure, clearly. Witnesses say that McGregor may have asked MGK and Fox for a picture, which the pair denied him. From there? War.

Per PageSix, “Our source added that McGregor allegedly threw his drink at Kelly. ‘They scuffled, then it settled down and Conor went for him again,’ the source said, adding that the photographers ‘weren’t happy’ and were ‘saying they were going to boycott Conor because they were worried MGK and Megan wouldn’t walk.’

Another source told us security had to get involved and ‘everyone was screaming.’

‘[McGregor] was ready to throw fists,’ the second source said, adding, ‘Security was having trouble holding him back.’”

But of course, moving along – nothing to see here. 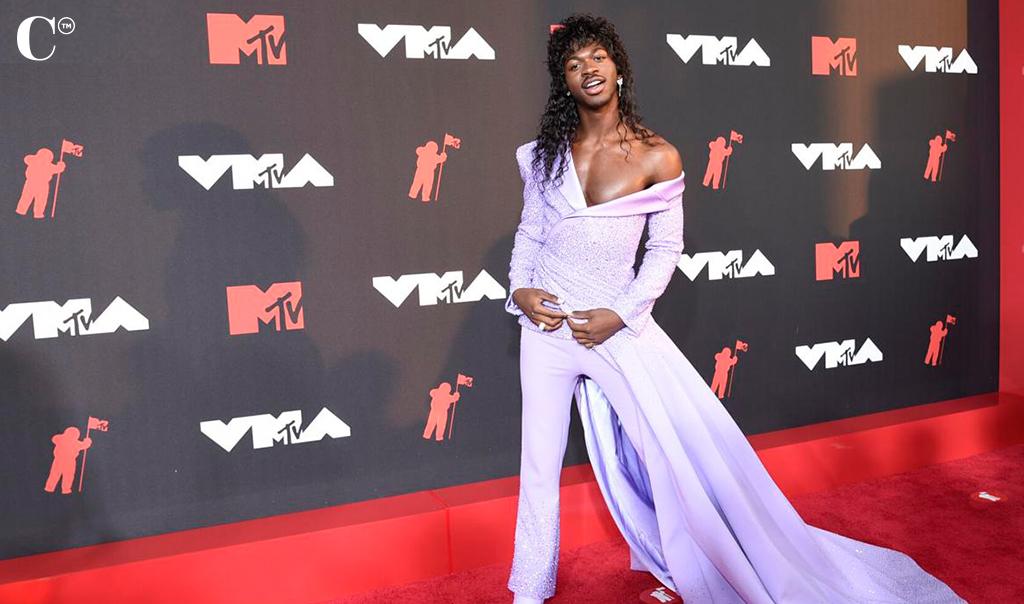 That may have been the most exciting moment of the night, but it wasn’t the most bizarre. The VMAs are famous for outlandish fashion, and this year was no exception. Lil Nas X showed up looking radiant – in a dress some called “grandmotherly.” It was a lilac, off-the-shoulder hybrid coat/dress over matching slacks. Lil Nas X – whose debut album is being released September 17th – also wore a waist-length kinky wig, glistening in all its ringlet glory. Not everyone was appreciative of his look, though.

Per the NY Post, “Despite his fashionably fierce efforts in a lilac Atelier Versace pantsuit-gown, the ‘Industry Baby’ artist was brutally shot down by VMAs pre-show host Jamila Mustafa when he went fishing for a compliment. ‘Do I look good?’ Nas asked. ‘Listen, I’m not going to say I’m hating on the ‘fit,’ Mustafa sniffed. ‘But, let’s move on.’ The rebuke immediately went viral on social media. ‘OH MY GOD WHY WOULD SHE SAY THAT,’ tweeted @blairsmani, expressing the sentiment of many viewers.” Clearly, McGregor wasn’t the only one who woke up and chose violence.

There were other notable moments as well in the realm of VMA fashion. 63-year-old pop legend Madonna rocked out with her rear out. In one of her signature black leather bodysuits, the fearless superstar had a cheeky cut to the back, revealing her perfectly toned butt. It was a bold choice for a woman pushing retirement age, but Madonna is still somehow in the absolute prime of fitness, and she really made it work.

Doja Cat also raised eyebrows. One outfit she wore during the night is almost indescribable. It’s reminiscent of a sleeping bag, with puffy quilted segments enveloping her head like some sort of sandworm halo. Maybe she’s really excited about Dune? Doja later doffed the cream puff look and wore a red chair upside down on her head.

And lest we forget Kim Petras. One of the nights most under-the-radar stars, the German singer/songwriter definitely made a splash with her sparkly floral-and-rhinestone babydoll dress that evokes a playing card joker. It wasn’t the strange stiff dress that turned heads though – Petras wore a black vinyl gimp mask, utterly incongruous with the rest of her outfit. Gimp masks, of course, leave the mouth uncovered – an interesting choice in the era of COVID. And also, on the red carpet.

There were some other moments too, including a dress that looked honestly to be made from one of those silver emergency blankets, two Drag Race stars wearing puffy moments, and Avril Lavigne in an interesting cut-out pink pantsuit. But it’s hard to outdo Lil Nas X and Doja Cat.

So Who Won What? 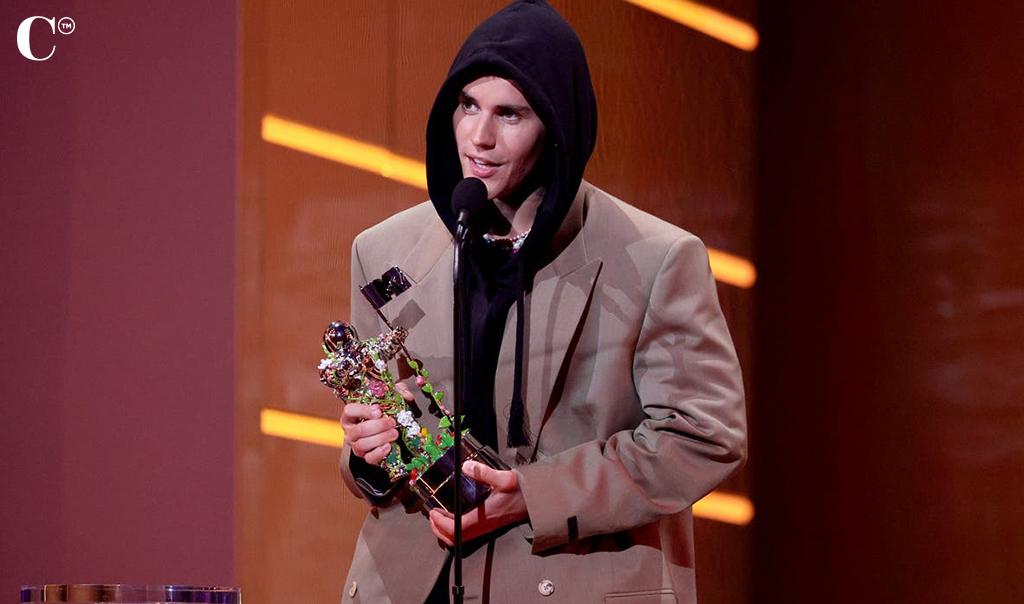 Through it all, the VMAs are supposed to be an award ceremony. So who won what? Performances were on point from industry-movers-and-shakers like Lil Nas X, Normani and Chloe, and fans went wild when ’90’s superstars Ashanti and Ja Rule reunited on stage to hand out an award; the pair has been touring together recently, too.

But who actually won awards?! Here’s a non-exhaustive list of some of the nights most exciting categories and their winners:

John Mayer and Justin Bieber, Madonna – what year is it? 2021 will go down as another weird one for the VMAs, but as always, it made for some pretty good television. In an era of award shows that can become repetative, the VMAs are never boring.