NYC Dining Requires Proof of Vaccination: Will Other Cities Follow?

New York City just announced that they would require proof of vaccination for indoor dining establishments and gyms, along with

New York City just announced that they would require proof of vaccination for indoor dining establishments and gyms, along with other entertainment venues. It’s a huge decision in a country divided about vaccinations, their efficacy, their safety, and the decision whether to require them or not. NYC’s decision has sparked concerns among vaccine skeptics that other major cities and travel hubs may soon require the same. Will this mandate start a domino effect across the country? 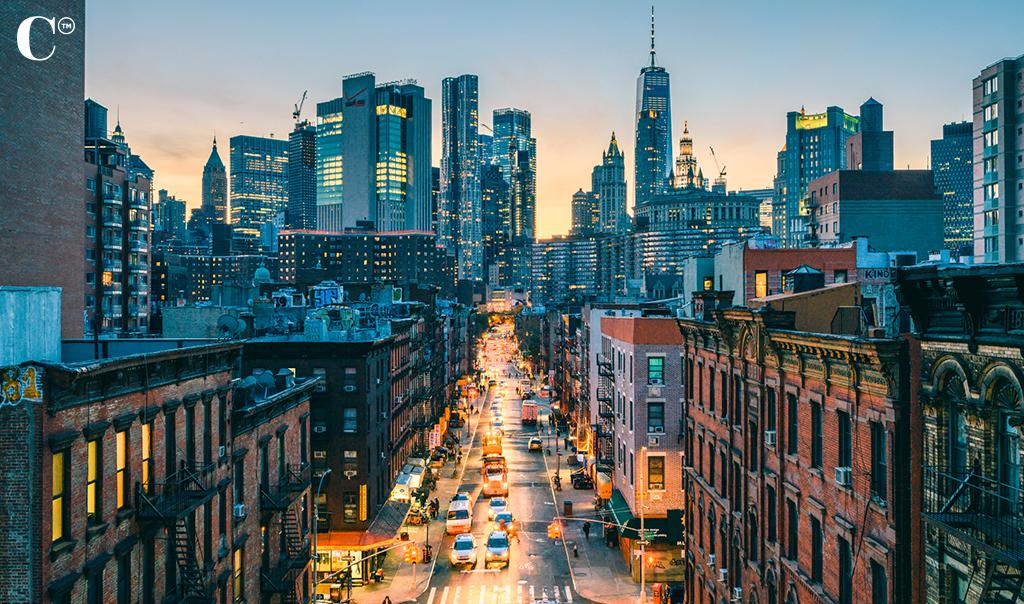 On Tuesday, New York City announced its new “Key to NYC Pass” campaign, which includes a mandate that proof of vaccination be presented to gain entry to indoor businesses including restaurants and gyms in the Big Apple. NPR shares, “‘The Key to New York City. When you hear those words, I want you to imagine the notion that because someone’s vaccinated they can do all the amazing things that are available in this city,’ said Mayor Bill de Blasio.

‘But if you’re unvaccinated, unfortunately you will not be able to participate in many things,’ he added.”

It’s a stunning and monumental decision to make in a country that can’t decide how it feels about COVID-19 vaccines. As of August 1st, the CDC tracker suggests that over half of the population is at least partially vaccinated, at around 58%. 50% of people have received the full dose. 70% of eligible adults have received it, which means that a large number of those unvaccinated are children under age 12 who are not eligible yet. But what about the 30% of vaccine holdouts? Some cannot receive it because of past reactions or for medical reasons. But the majority of holdouts just don’t trust or like the science. It’s been highly politicized in the country, making it a hot-button topic often divided along party lines.

By analyzing those numbers, it’s clear that only a small percent of American adults aren’t vaccinated, yet it seem like so much policy is formed around catering to their hesitation instead of science. New York City has decided that science and keeping their workers safe is their primary goal, but that doesn’t mean the decision has been free of backlash. Across the internet, people are decrying what they see as an impingement on freedom. The counter argument has been that they still have freedom, but so do business owners and other patrons who want to be safe. It’s a messy situation that isn’t easily settled, but New York City’s bold choice is almost sure to spark a domino effect. The Mayor has added that reasonable accommodations will be made for the medically exempt or those under 12 who cannot yet receive the vaccine. People can show proof of vaccination using their physical cards or with the NEW COVID SAFE app.

The drastic step is a desperate bid from the city’s Mayor who wants to avoid another shutdown. Rising vaccination rates have managed to keep the city open even in the face of the rapidly growing Delta variant, but he feels it’s necessary to take an even harder stance to keep things from spiraling. Per NPR, “‘Many businesses cannot afford to live through another shutdown. So this is a good option for us,’ said Tren’ness Woods-Black of Sylvia’s Restaurant in Harlem. ‘I know that folks feel a little way when it’s mandated to take the vaccine, but it is a matter of life and death.’” 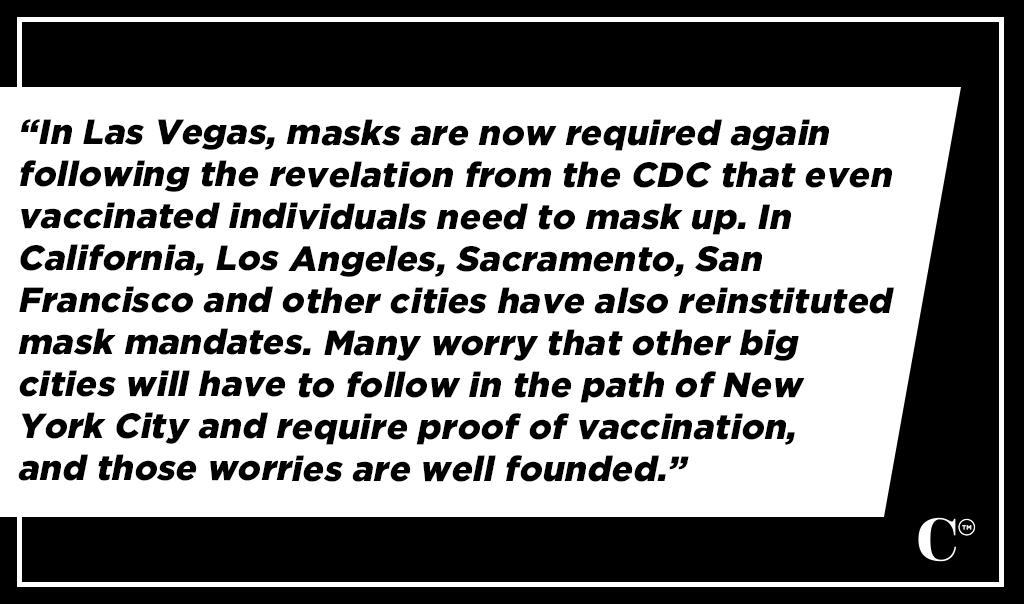 The decision in New York City comes as other major cities across the country roll back their restrictions. It’s only been a month or two since a lot of cities like Las Vegas and Los Angeles let their mask mandates expire and restrictions loosen, and now they’re having to go back in time. In Las Vegas, masks are now required again following the revelation from the CDC that even vaccinated individuals need to mask up. In California, Los Angeles, Sacramento, San Francisco and other cities have also reinstituted mask mandates. Many worry that other big cities will have to follow in the path of New York City and require proof of vaccination, and those worries are well founded.

In cities with high reliance on hospitality and entertainment for revenue, 2020 was especially devastating. If mandating vaccines in a roundabout way – by requiring proof of them – prevents another shutdown, it may be the only option these cities have to keep their economies from crashing and burning. Many businesses barely survived one shut down and cannot survive another. The hospitality industry in general is doing well as Summer travel has been better than anticipated, but it could easily lose all gains if another shutdown becomes necessary.

White House medical advisor Dr Anthony Fauci has said that he doesn’t believe more lockdowns are coming; to Fauci, the important thing to focus on is increasing vaccine rates. With enough people vaccinated, more shutdowns shouldn’t be necessary. But vaccine hesitation is still rampant across many states – mostly red, Bible Belt states. There are a lot of reasons people hesitate to get the vaccines that aren’t simply political.

Among the Black community for instance, understandable mistrust of the medical machine has led many to hesitate to get their jabs. The United States has a horrible and shocking history of medically experimenting on Black bodies, so when many hear the words, “new vaccine,” they immediately hesitate. That fear needs to be acknowledged and addressed, because it’s not unfounded. But for many, the hesitation to get a shot comes down to red versus blue. Even though Republican former President Donald J Trump was responsible for overseeing the vaccine’s development and rollout, the spin machine has been working overtime over the past 7 months to convince his voting bloc that the push to vaccinate is a Democrat plot. Just like many of the same voters are convinced masks are a way to condition a population to compliance, they see the shots as dangerous and freedom-stealing. Without acknowledging that there’s a large number of people holding these beliefs and addressing them adequately, there’s no way to combat these baseless fears.

It’s important to note that even though Fauci doesn’t believe more lockdowns are imminent, he does caution that he expects things will “get worse.” So cities may be forced to use their only resources available and require proof of vaccination.

One major metropolis where this likely won’t happen is Miami. Florida Governor Ron DeSantis has taken a hardline stance against vaccine requirements and mask requirements. Even as Miami hosts Rolling Loud and visitors flock to the state to enjoy the warm Summer breezes, there’s almost no protection for locals. So while Los Angeles, Las Vegas, and others may soon require proof of vaccine, Florida will continue to stand defiant; even as it becomes responsible for 1 in 5 new cases. 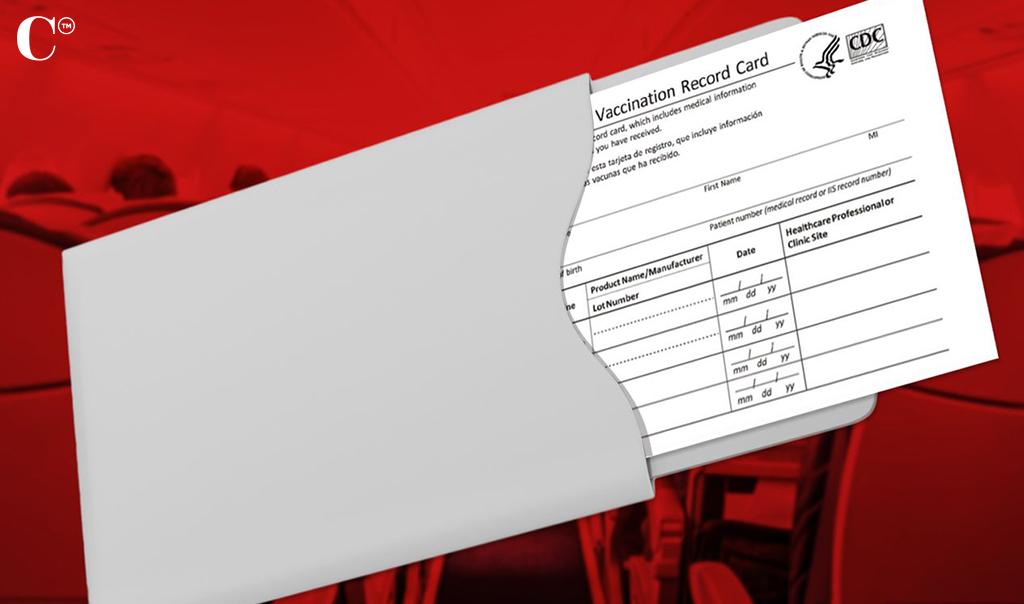 It’s not just cities requiring vaccines, or rather proof of vaccination. Big names in the business world have recently instituted mask requirements, including McDonald’s, Walmart, Target, Kroger, and Apple. But other companies have taken it a step farther, requiring on-site employees to be vaccinated. These businesses include: 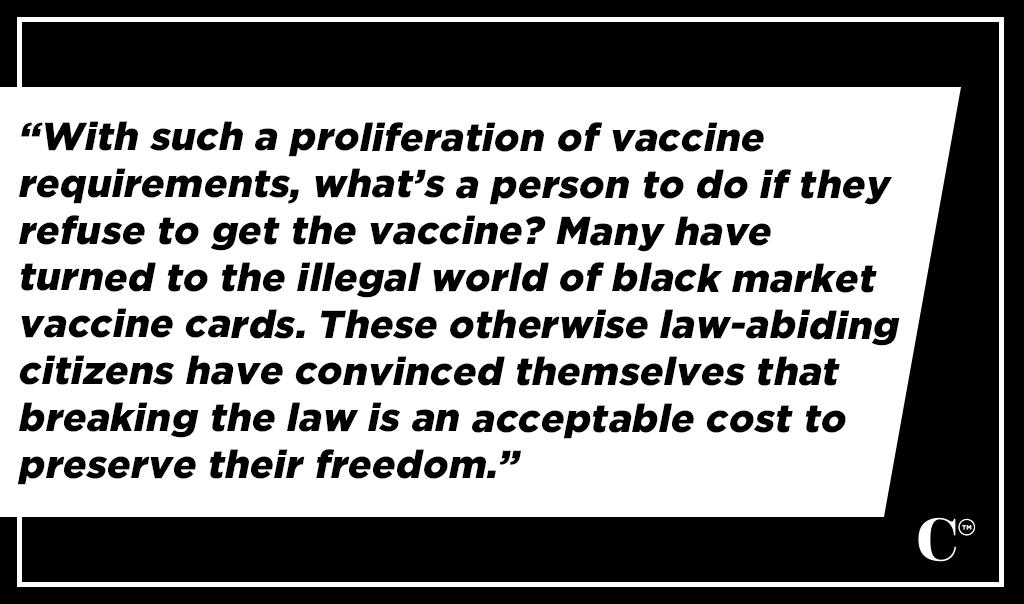 With such a proliferation of vaccine requirements, what’s a person to do if they refuse to get the vaccine? Many have turned to the illegal world of black market vaccine cards. These otherwise law-abiding citizens have convinced themselves that breaking the law is an acceptable cost to preserve their freedom.

But who’s selling cards to these people? They have to be convincing. After all, everyone knows what the cards look like now so irregularities are going to be glaring. After speaking with some sources who confirm that this is going on, CELEB is investigating where these fake vaccine cards are coming from and who’s manufacturing them, and we will update in a future story.

This sort of paper wheeling and dealing may soon necessitate that the vaccine card system goes online, relying upon vaccination sites to enter the information electronically at point of contact. But for now, in New York City and soon other cities across the country, the message is clear: get your vaccine, or stay away.