Exclusive: NFL Star Vernon Davis Talks Tom Brady, COVID-Era Football, and Why He Left the Game for an Entertainment Career

Are we ready for some football? Maybe, maybe not. Former Washington tight end Vernon Davis — who announced his NFL 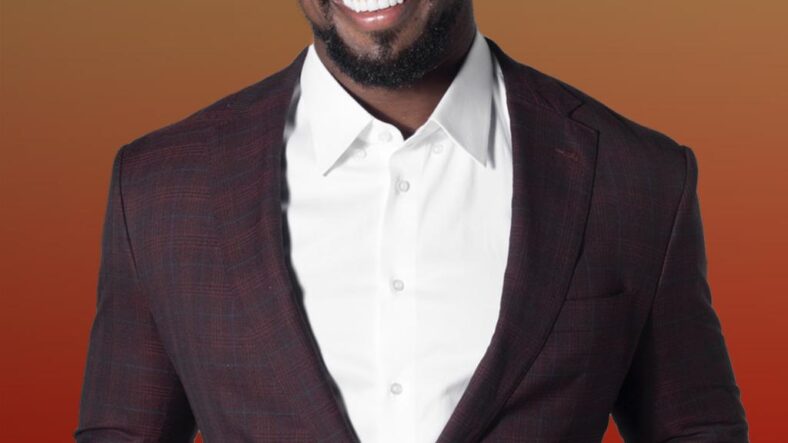 Are we ready for some football? Maybe, maybe not.

COVID-19 has threatened sports, concerts, and just about every leisure activity around the globe. Not too long ago, the 2020-2021 football season’s fate was uncertain. But now, following the MLB, NBA and NHL‘s lead, the game must go on, although many stadiums will remain fanless until further notice. These are historical times, and a half-ass season is better than no season.

“It’s gonna be interesting, it really is. I think I would have opted out if I was playing in a stadium with no fans there,” Davis admits. “There’s something about ‘Game Day’ and those fans. Running out of the tunnel, you’ve got tons of people on the sidelines, and you know that they’re all watching … the adrenaline, the emotions, it’s just amazing. It’s

the greatest feeling ever.”

Davis, a current contestant on ABC’s Dancing with the Stars, which coincidentally premieres during Week 1’s Monday Night Football, has indeed experienced one of those greatest feelings ever.

Not only did the former Maryland baller win Super Bowl 50 with the Denver Broncos in 2016, but the athlete scored a game-winning touchdown while playing for the San Francisco 49ers (his first team out of the draft) against the New Orleans Saints in the 2012 divisional playoffs, sending the 49ers off on their first NFC title since 1997, a match that Bleacher Report once dubbed “one of the best 5 games of the last decade.”

“It just goes to show you have to have gratitude at all times because you never know if you’re going to have moments like that again,” the humble star explains while recalling that specific instance of deafening stadium applause. “I’m truly grateful and I wouldn’t have traded it for anything.” 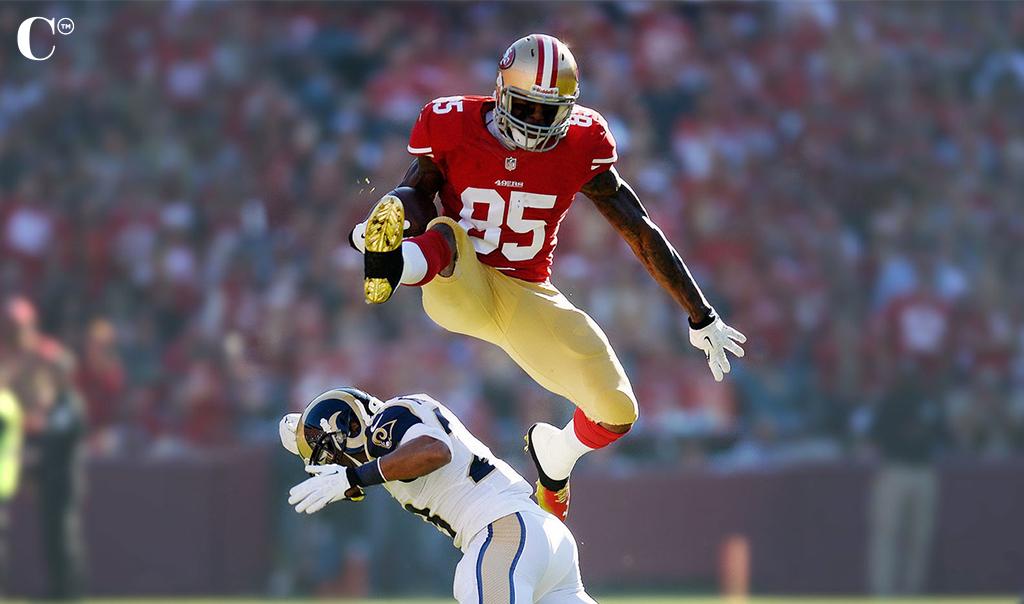 Needless to say, Davis just can’t imagine playing without any – or many — fans:

“I think it should be a percentage of fans and they should just distance people,” he saysof all the upcoming games. “Make sure they have their room and their space, have someone in there, rather than no one. Get some noise in there, and it will be like ‘Game Day.’ To me, it won’t be the same.”

Even though this season most likely won’t be anywhere near as exciting for all involved, Davis doesn’t think performances will be affected by the new surroundings, or lack thereof.

“I think whether there’s fans there or not, you have a job to do, you’re gonna work,” he explains. “That’s what they pay you to do, to help with the game, so you’ve gotta step up and do your job, just like you do in practice.”

According to a Sept. 8 update by ESPN, the Miami Dolphins’ Hard Rock Stadium will be allowing fans at 20% capacity, roughly 13,000 fans. The Cincinnati Bengals at Paul Brown Stadium will host 6,000 fans only for a couple key games, which is what the Cleveland Browns are doing at FirstEnergy Stadium.

The Indianapolis Colts will have 2,500 for the opening game at Lucas Oil Stadium and TBD for the rest of the season. The Jacksonville Jaguars at TIAA Bank Field have the loosest restrictions at 25% capacity for the entire season.

The Denver Broncos‘ stadium, Empower Field at Mile High, will allow 5,700 fans for their home game with the Bucs. The Kansas City Chiefs at Arrowhead Stadium will fill to 22% capacity. The Dallas Cowboys at AT&T Stadium will have fans, but it hasn’t been announced how many they will allow.

While players and fans won’t be witnessing the sort of fanfare that Davis is used to this year, we can still relive the NFL’s most magical moments online at least, while we are forced to roll with these semi-unfortunate punches. We should be highly appreciative that we’ll still be able to see our favorite teams battle it out on the field after all, remember how grim it was looking in March? 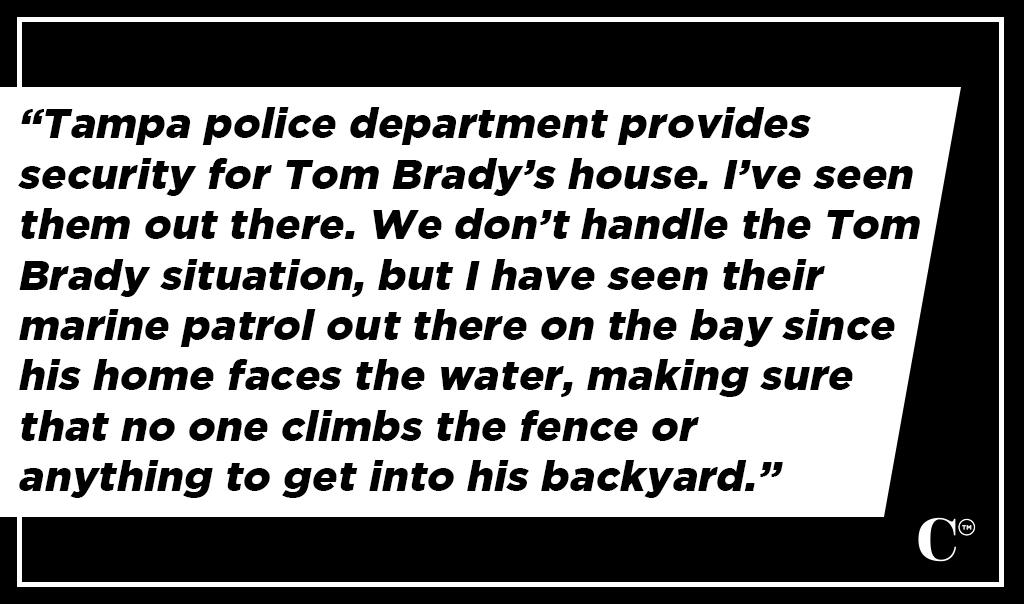 The most anticipated change this season, some would argue a bigger change than even the strict coronavirus regulations, is the Patriots’ beloved longtime quarterback Tom Brady starting his first season as a Tampa Bay Buccaneer on Sunday against The Saints in New Orleans.

“I think he’s going to be received really well,” Davis says. “I think Brady’s proven that he’s one of the most talented football quarterbacks to ever play the game, so I think if he continues to do everything he’s done in the past, they’ll have a good year for sure.”

As far as the Saints? “That team is fantastic. I think it’s going to be a battle, that will definitely be one of the most-watched games this year.”

Tampa already had to beef up security when Brady made his move to the Sunshine State – renting Derek Jeter‘s mega-pad on Davis Island — with supermodel wife Giselle, and their kids.

A rep for the Hillsborough County Sherriff’s Department tells CELEB:

“Tampa police department provides security for Tom Brady’s house. I’ve seen them out there. We don’t handle the Tom Brady situation, but I have seen their marine patrol out there on the bay since his home faces the water, making sure that no one climbs the fence or anything to get into his backyard.”

Thousands, if not millions, of fans are understandably still in mourning and having abandonment issues over Brady leaving the Patriots, but at least they can still watch him play.

As for who we should be paying attention to this season, the Pathwater investor says, “I think America should have their eyes on Adrian Peterson, I played with him back in Washington for two seasons and he’s the most impressive athlete I’ve ever seen,” he confesses. “For him to have been playing this game for such a long time, he’s still playing at a high level, his work ethic, everything he brings to the game is unprecedented, so I think we should keep our eyes on him and see what he’s going to do this year.”

Davis Has Plans For His Retirement

Davis then opens up about his retirement, which he prefers to call his next chapter. 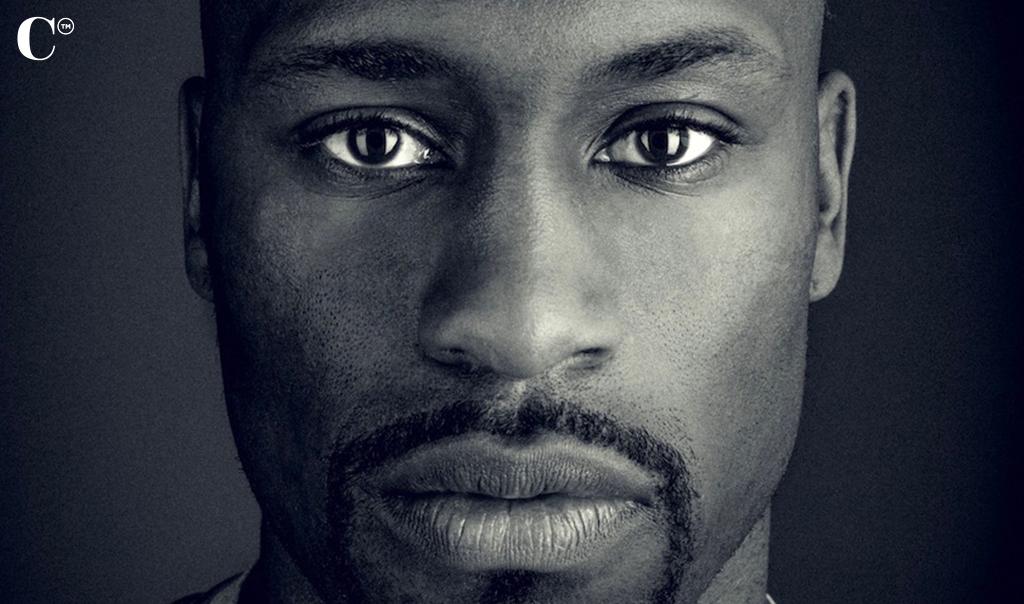 “When I decided I was leaving, I was thinking to myself, ‘Hey, this is something I’ve been doing my entire life, it’s going to be hard to walk away,’” he recalls. “There’s a lot of doubt. There’s a lot of fear. But I said, ‘I’m gonna put my feet on the ground and gonna keep going. I’m happy with my decision. I have wonderful people in my corner supporting me, and I just have to hope for the best and prepare for the worst.”

Davis says he experienced that spark to leave all of a sudden. It wasn’t gradual. “The journey has been amazing. It was just time.”

As far as Davis’ transition to entertainment, he says it has been a challenge. “I’m just trying to figure out how to put it all together,” he says. “You know it’s gonna come together. Just like with anything else, you have to be patient, and that’s what I’ve been trying to be, patient.”

Some colleagues urge Davis to go into broadcasting so that he can still be a part of the sports world, but he commendably declines the easy way out. “I want to challenge myself. I want to do something from the bottom and just build myself up,” he passionately shares. “It’s nothing like being able to invent something and put in the hard work and dedication and just, everything coming to fruition, it’s great.”

And now we get to watch him doing a different type of performance, on Dancing with the Stars. “It is extremely hard. It’s like learning football all over again.”

Currently, the father of three tries not to be overly paranoid but lives responsibly. “I try not to live my life in fear. I try to stay safe, follow the protocols, wash my hands, hand sanitizer, mask, and just stay safe. At the end of the day, that’s all we can do, because we’re going to go out and go to different places. We just have to make sure that we’re doing it and professional about it all.”

Vernon Is Moving Into An Entertainment Career

The actor and producer, who just finished two lead film roles, is plugging along for a jampacked 2021, not that he isn’t busy now learning grueling dance performances. “I have a soundstage in Georgia, and we have five films we’re going to knock out between now and 2021.” 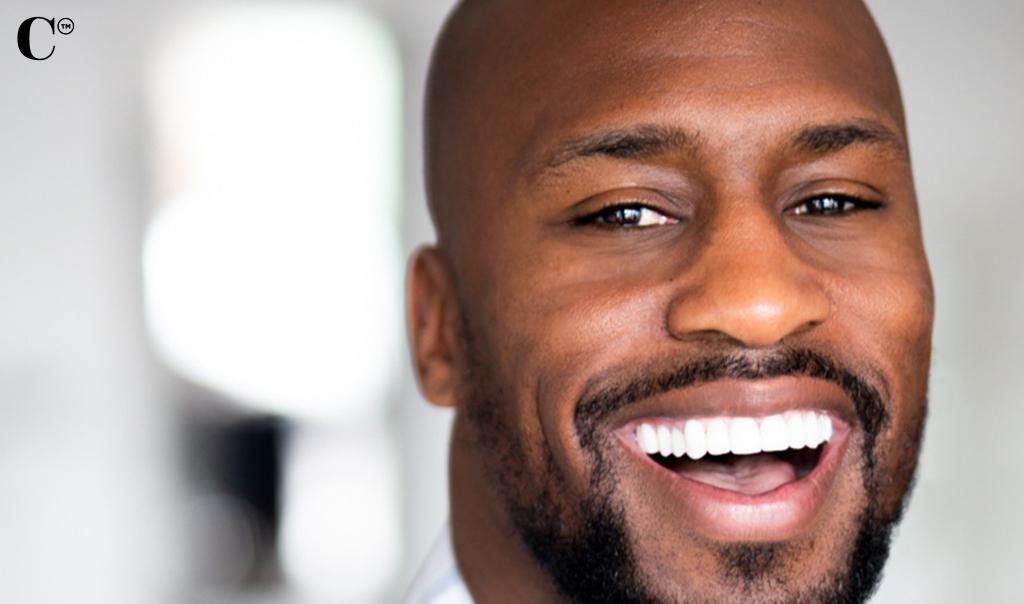 Davis praises his all-time favorite actor, Sidney Poitier, and reveals he would love to work alongside Paula Patton. “She’s fantastic.”

The entertainer also mentions he took the news of Chadwick Boseman particularly hard. “That was tragic, that was tough. I cried when I saw the news,” he shares. “That’s another actor that I really looked up to and who inspired me, he was a genius. To see him go so soon was just heartbreaking. That was tough, that was extremely tough. He’s

in a better place, and he left a great legacy behind. So, we just have to keep him with us and always remember him.”

Despite Davis’ preference to stay out of politics, we go on to discuss the media and whether or not racial issues and violence are fueled by the unending coverage. “I think whenever there’s a problem or an issue, the media is going to catapult it even more to have something to talk about, the media shapes our opinions and our ideas, and they know they’re doing that,” he says. “If you don’t have a problem, there’s nothing to talk about.”

Davis, for his part, tries to remain optimistic. 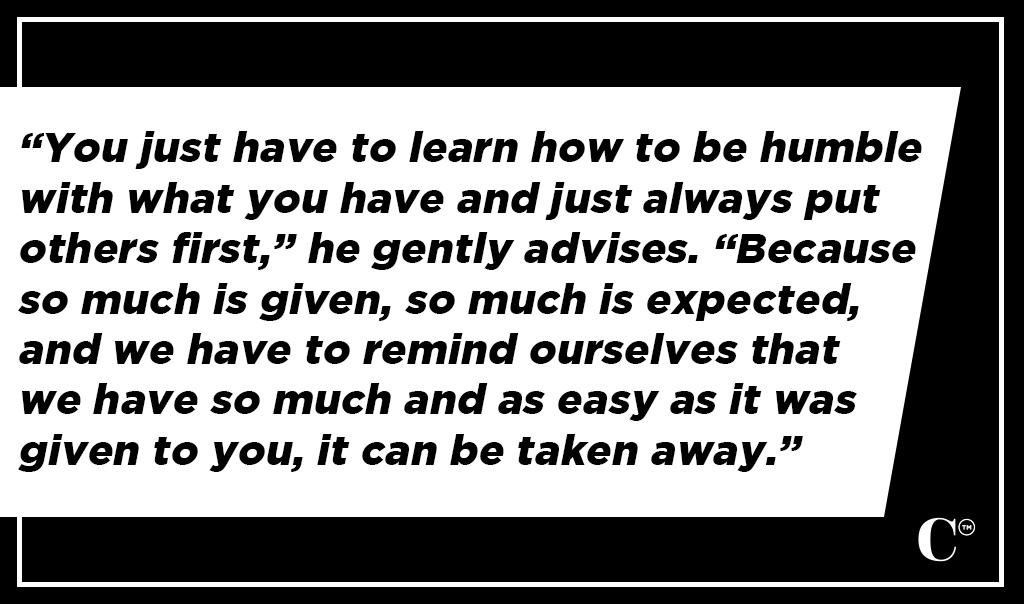 “I’m trying to play devil’s advocate and just stay positive,” he says. “I think at the end of the day, when you have something that’s already bad, you know, when it rains it pours, then life is good.”

The admirable, glass-half-full optimism that Davis possesses is something he has always consciously manifested throughout his life. “I always kept a vision board, a new vision board every single year, and I keep it beside

my bed so that when I wake up, that’s the first thing I see, and the last thing I see when I close my eyes,” he says softly with his megawatt smile.

Davis concludes with a statement that we can apply to all the things we’ve taken for granted before the pandemic, whether it’s losing our jobs or not being able to go to a restaurant or football game.

“You just have to learn how to be humble with what you have and just always put others first,” he gently advises. “Because so much is given, so much is expected, and we have to remind ourselves that we have so much and as easy as it was given to you, it can be taken away.”