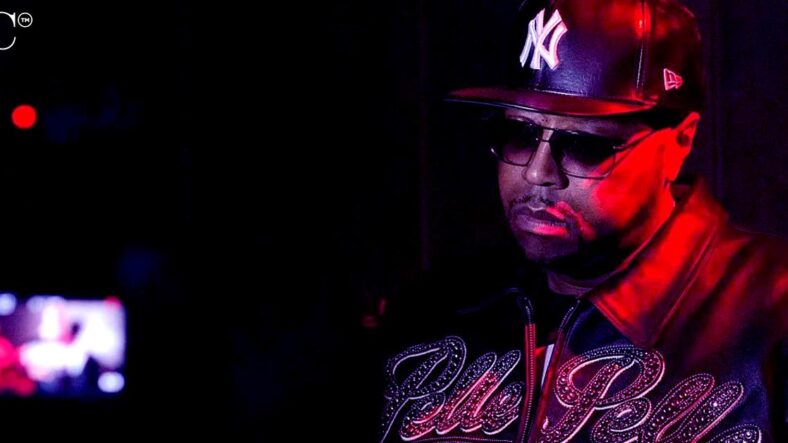 A heartbreaking loss for the Hip-Hop world this week as news came down the pipeline that legendary NYC DJ Kay Slay has died. Slay had been battling COVID for months, and succumbed to complications of the virus.

Known for his radio persona and his innovation in the world of rap mixtapes, Slay was the pioneer and entrepreneur who helped launch the careers of some of hip-hop's greatest.

Slay died at age 55 and is survived by his mother Sheila Grayson – although he kept his family life extraordinarily private.

DJ Kay Slay contracted COVID four months ago – and has been battling valiantly since then. Unfortunately, complications from the virus took his life this week.

TMZ reports, "The NY-based legendary hip-hop ambassador passed away Sunday, first confirmed by Wack 100, and then others, as tributes started to pour in from across the industry. His family writes, 'Our hearts are broken by the passing of Keith Grayson, professionally known as DJ Kay Slay.'

They add, 'A dominant figure in Hip Hop culture with millions of fans worldwide, DJ Kay Slay will be remembered for his passion and excellence with a legacy that will transcend generations.'"

Slay spent his career as a crucial bridge in the gap between hip-hop generations, and was known for recognizing talent – and then driving a wedge between people to get them fired up. Slay's ability to orchestrate the world of hip-hop led to the rise and fall of many careers, and helped stoke tensions between artists, leading to fuel for the careers of greats such as Nas, Jay-Z, 50 Cent and others.

The New York Times writes, "Few figures in hip-hop could trace their continued presence from the genre’s earliest days to the digital present like he could. In late-1970s New York, Slay was a young street artist known as Dez, plastering his spray-painted tag on building walls and subway cars, as chronicled in the cult documentaries 'Wild Style' and 'Style Wars.'

Then he was the Drama King, a.k.a. Slap Your Favorite DJ, hosting the late-night 'Drama Hour' on the influential radio station Hot 97 (WQHT 97.1 FM) for more than two decades before his illness took him off the air.

'Cats know it’s no holds barred with me,' Slay told The New York Times in 2003, when the paper dubbed him 'Hip-Hop’s One-Man Ministry of Insults.' In addition to providing a ring and roaring encouragement for battles between Jay-Z and Nas, 50 Cent and Ja Rule, Slay gave an early platform to local artists and crews like the Diplomats, G-Unit, Terror Squad and the rapper Papoose, both on his show and on the mixtapes that made his name as much as theirs."

Slay's cutting remarks and ability to identify and prod the sensitive parts of artist's careers led him to be the master conductor of the hip-hop scene through the '90's and early '00's.

A Look Back at Kay Slay’s Life

Slay was born to the name Keith Grayson in New York on Aug. 14, 1966, and was raised in East Harlem. From a young age, Grayson felt the draw of disco and dance, and with the rise of the hip-hop breakbeat scene that began to form the foundations of what would be rap, Grayson traveled to the Bronx to immerse himself in the culture and moment.

Early on, Grayson was a graffiti artist and breakdancer, rapping with friends and going by the name Spade 429. Eventually he changed his street name to Dez TFA and then just Dez. Per The New York Times, "'I wanted a nice small name that I could get up everywhere and do it quick without getting grabbed,' he said at the time. 'You’re telling the world something — like, I am somebody. I’m an artist.'”

When NYC began cracking down on graffiti, Grayson migrated to the name Kay Slay and discovered an interest in the DJ turntables. However, he was soon drawn into the world of drugs and robbery.

The New York Times adds, "In 1989, Slay was arrested and served a year in jail for drug possession with intent to sell. On getting out, he told Spin, 'I started noticing Brucie B, Kid Capri, Ron G. They were doing mixtapes, doing parties and getting paid lovely.' He sold T-shirts, socks and jeans to buy D.J. equipment and worked at a Bronx facility that assisted people with H.I.V. and AIDS.

'I can’t count the number of people I saw die,' he told The Times of that period. 'Working there really made me begin to appreciate life.'”

Through the '90's, Slay tired of the music industry's elitist and unwelcoming atmosphere and began unabashedly calling out executives in his music. Per The New York Times, "It was that irascible spirit that helped endear him to rappers who had their own scores to settle. In 2001, Slay had a breakthrough when he premiered 'Ether,' the blistering Nas dis of Jay-Z that revitalized headline hip-hop beef following the murders of Tupac Shakur and the Notorious B.I.G. His radio slots and mixtapes became a proving ground, and he later started a magazine called Straight Stuntin’.

'He’s like the Jerry Springer of rap,' one D.J. told The Times. 'All the fights happen on his show.'”

Unafraid to speak his mind and start fights, Kay Slay inspired a generation and helped bridge the old school and the new school – sometimes by pitting them against each other. His death leaves behind a hole in the East Coast hip-hop scene, and leaves behind huge shoes to fill. The art of the diss track may never be the same again.