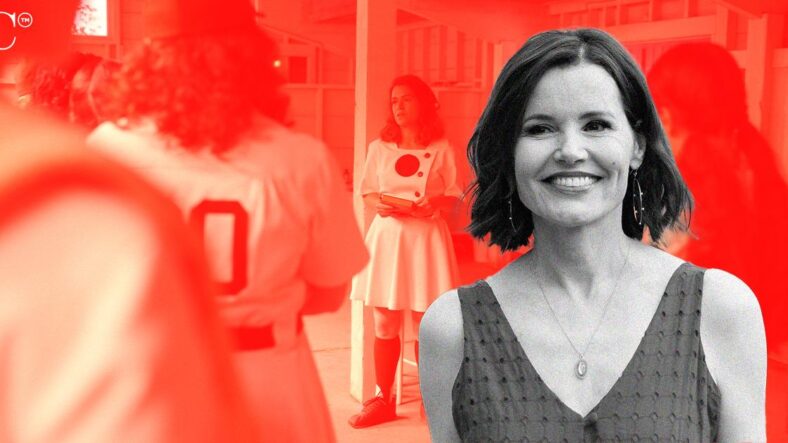 “When Thelma & Louise came out – whether people or critics liked it or didn’t like it – they all said, ‘this will change everything. We are going to see so many movies starring women.’” The Academy Award winning actress spoke with me and a few other critics from the Critics Choice Association earlier this week.

The movement of female led projects on screen have been slow – to put it mildly – in Hollywood. And that is a subject that Davis has long gone to bat for. “When A League of Their Own Came out they also announced, ‘this changes everything. We are going to see so many female sports movies.’” Davis sits back with a huge smile on her face and continues, “And so I was, ‘let’s wait for all this fabulous change to happen’ and… nothing. It did not get better whatsoever.”

She isn’t all that wrong. The Academy Award winning actress who appeared in such iconic films as the aforementioned films of Thelma and A League long ago decided to stop just complaining and do something about it.

“I call myself an advocate rather than an activist because I don’t try to rouse the public basically. It’s a small distinction. But, my approach is entirely positive,” says Davis. Her version of positivity is the founding of the Geena Davis Institute on Gender in Media. The goal was simple enough: to create gender balance, foster inclusion and reduce negative stereotyping in family entertainment media within the entertainment industry.

Davis goes on to recount the hope Hollywood gave her (and women all over) some years later when, in 1996, First Wives Club came out. “This is going to change every, every, everything because now women in their 50’s have a hit.” she echoed the talk of Tinseltown at the time. Again the needle didn’t move much then. Davis recalls some years after that when Hunger Games was released, hope took aim on screen. Still, not much of a difference. And again with the release of Crazy Rich Asians, the talk was the same. “I was like ‘really, you’re gonna do that again?” says Davis.

This is not at all to say that nothing has changed. There has been progress. Well, some progress. Case and point. The new A League of Their Own spinoff that just dropped on Prime Video. The eight episode season follows similar themes, plots and characters. Similar, not exact. What is different is the diversity with a capital ‘D’ that is explored on screen. Both in story and in cast.

It’s a welcome breath of fresh air for Davis. One she could not have conceived of in the early 90’s. “The movie lives on. When I made that movie I had no idea how long it was going to last.” says Davis. “I have the same number of women and young girls telling me that they recognize me and tell me they play sports because of that movie.”

Another change that has swept Hollywood is the Me Too Movement. For Davis, that was a seismic shift. “If you’re just coming into the business now, it’s completely different. All of my peers and I would never complain about something, or tell about so-and-so doing this, or whatever because they would just get somebody else,” says Davis. “Now, you can be sure that your agent is not going to send you to an audition in a hotel room. There’s a lot more guardrails in place for women starting out.”

Though Davis already had an Oscar on her mantle when she made A League of Their Own, since then she has gone on to lead multiple television projects such as Commander in Chief, The Exorcist and GLOW. Yet somehow it mostly comes back to either Thelma or Dottie Hinson, two of Daviss’ iconic characters. “Thirty years later they are doing A League of Their Own with different characters. It’s not about the same characters at all. And It’s great.”

Outside of playing catch-up with us critics, Davis continues to keep her plate full. In addition to the work she does with her institute Geena also partners with the annual Bentonville Film Festival.

In the near future, the award winning actress has a book “Dying of Politeness: A Memoir,” set to release on October 11. “My memoir is coming out, I can’t believe it. It’s about how the roles that I have played changed me.”

And if that is not enough, a new movie with Channing Tatum, Christian Slater and Kyle MacLachlan. “It’s called Pussy Island (laughing). I have not heard anything about changing the title or anything.” The movie however is helmed by first time director Zoey Kravitz. “Whatever you may think that implies about the film is probably wrong. I get to be the comic relief which was tremendously fun for me. I loved it.” Davis just wrapped filming in Mexico.

“I am never going to say what I think happened. It’s so much fun that people are still debating it. Why would I want to spoil it?”

Her characters continue to resonate with fans all over. From the fellas, it’s mostly around her character in Fletch as Larry. “I can’t tell you how many people have sneaked up on me and said, ‘I love your body Larry,’ in reference to an infamous line in the movie.

And for the women, Davis is always asked if her character as Dottie in A League of Their Own intended to drop the ball at the end of the film giving the opposing team, and her sister in the film, the win. “I am never going to say what I think happened. It’s so much fun that people are still debating it. Why would I want to spoil it?”

Davis says with her big radiating smile that is without a doubt in a league of her own.