Pedophilia and Human Trafficking are Real, But No They Don’t Involve Pizza or Politics

I eat pizza a lot but guess what, pedophilia and human trafficking are not OK with me; I just friggin’ 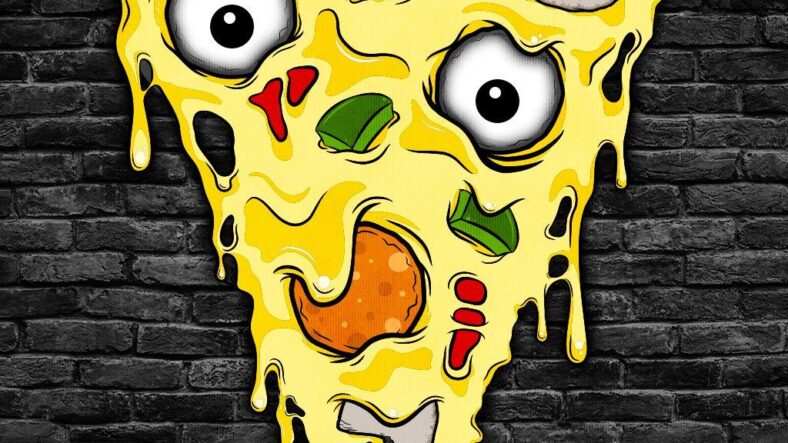 I eat pizza a lot but guess what, pedophilia and human trafficking are not OK with me; I just friggin’ LOVE pizza. Oh, and I HATE politics—and deep-dish pizza too. But, in fairness, does anybody truly like deep-dish pizza? Really?

I’m also not liking the 45th season of the USA right now. The star character presents as being exceedingly inauthentic and phony. This Donald Trump dude comes across as such a con-man, not to mention a brazen liar and sensationalist.

Then, of course, there’s the divisive, race-baiting, hateful rhetoric and never-ending spew of petty, butt-sore little bitch Twitter drivel. All I can say is that this season’s producers need to employ a better scriptwriter, and they need to up the ante when it comes to the hair and make-up team.

That said, guess what? I’m STILL vehemently opposed to pedophilia and human trafficking —gasp! Even though a seemingly endless list of celebrities who are vocally anti- Trump and sometimes eat pizza: including Chrissy Teigen, Justin Beiber, Meryl Streep, Ellen Degeneres, Oprah Winfrey…. and even, wait for it, Tom Hanks…amongst a host of others, are all really into pedophilia and human trafficking apparently, according to the Alt-Right, pizzagate and QAnon believers.

I don’t know about you, but I see a common theme here, and it’s a theme that makes me really angry. But that’s the point, isn’t it? Season 45’s scriptwriters want the audience to be angry and confused and divided and hateful and living in utter chaos—it’s the oldest trick in the book of politics, it’s not like we haven’t seen it all before.

It’s Nixon, Thatcher, Stalin, Buchanan, Hoover 101, and so many others throughout the history of politics.

You can spot them easily if you know the signs, and they stem back to everybody’s favorite serial killing psychopath—that lovable old rogue, Henry VIII, the great King of division and propaganda, as well as England.

However, nobody has ever previously attempted to paint their opposition as being participants in pedophilia and human trafficking —two of the most egregious crimes there are—until recently.

Pedophilia, along with hebephilia and ephebophilia, has, sadly, been around since the dawn of humanity. So have creepy old dudes preying on young chicks. Slavery has also been around for centuries, but human trafficking began in the 1400s when the Portuguese began shipping people from Africa to Europe to exploit and abuse them on their home turf. I’m pretty sure that’s before even Hillary Clinton was born (I’d need to double-check that on 4Chan to be certain though). 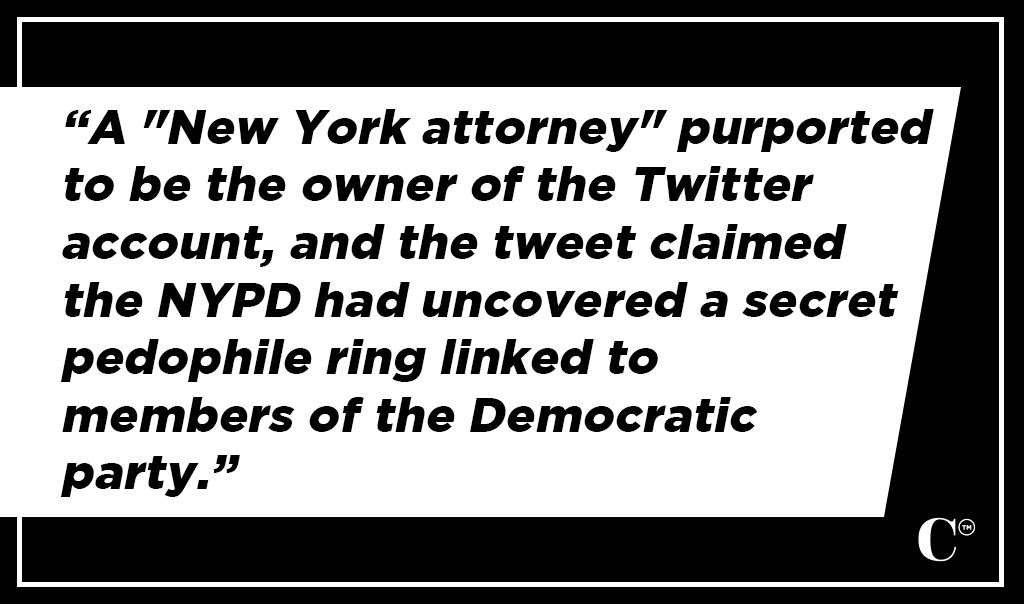 However, pedophilia and human trafficking has never been a political issue before; it’s just been a really messed-up, despicable, and criminal issue—period.

The politicization of pedophilia and human trafficking started in late 2016, during the Trump presidential campaign. That’s also when the coños started F’ing with my goddamn pizza.

When pizza became not just pizza

The pizzagate scandal broke on the renowned, highly respected, and well-established news platform, 4Chan, back in November 2016.

You know, 4Chan! Where anonymous trolls and incels post whatever comes into their mind during the hours they’re buried away in their mom’s dark little basement. No substantiation is required, no sourcing or reporting or facts are needed—but then, these days, it’s all about the “alternative facts,” right? On 4Chan, everybody is “red-pilled,” so there’s no risk of fake news; everything is just totally factual. Weren’t you aware of that?

A “New York attorney” purported to be the owner of the Twitter account, and the tweet claimed the NYPD had uncovered a secret pedophile ring linked to members of the Democratic party.

Wikileaks had just begun releasing the email messages they’d hacked from John Podesta, who was Hillary Clinton’s campaign manager at the time. There were mountains of emails containing embarrassing revelations—good job Anthony Weiner!—but it was Podesta’s correspondence with James Alefantis that sent the 4Chan trolls into overdrive.

Alefantis is a staunch supporter of the Democratic party, and he’d raised substantial funds for both Barack Obama and Hillary Clinton’s presidential campaigns. Alefantis is also gay, and he’d been in a relationship with David Brock, who’s an outspoken liberal too. Oh, and Alefantis owns a pizza parlor in Washington D.C. called Comet Ping Pong.

Can you see where this is going?

Once you’ve predetermined an outcome, then you just have to build a “case” to back it up—ask any corrupt cop out there; it’s not that difficult to do actually. In this situation, it just took a few hours of trawling through Alefantis’ Instagram feed and some speculative critique of his (admittedly kind of weird) art collection combined with photos he’d posted of friends’ and customers’ kids.

Then it took considerably more hours of trawling through the emails between Alefantis and Podesta to uncover the “secret code words” they were using.

In the 1970s, some gay men who were looking to casually hook-up would use colored handkerchiefs to signal who or what their preferences were—it’s known as the hanky code, and it was a secret language of sorts.

In essence, that’s the “evidence” behind pizzagate. Seriously.

“They ignore basic truths,” Alefantis told the BBC. “For instance, the conspiracy supposedly is run out of the restaurant’s basement. We don’t even have a basement.”

Not to the Alt-Right and QAnon believers, though.

Season 45 ramps up the cray

The pizzagate “scandal” gained momentum and started spreading like herpes, Q popped up on 4Chan and sparked the QAnon movement, and in the blink of an eye, Trump was anointed by God and sent to this earth to save the suffering children.

Democrats, celebrities, the “elitists” and even some Republicans (only the ones who were vocal in their opposition to Trump though, funnily enough) were suddenly, somehow, now all into pedophilia and human trafficking.

Speak out against Trump and post, or posted a photo in the past, of a kid eating pizza? You engage in pedophilia and human trafficking.

Speak out against Trump and not believe in pizzagate? You engage in pedophilia and human trafficking.

FFS, can the crazy train just stop, because I want to disembark now before it just crashes. Plus, I really want to eat some damn pizza—pepperoni, cheese, vegetable pizza, I don’t care—just don’t add pineapple, and don’t make it deep dish. Gross.

No pizza and no politics

As is the case with all of the best hoaxes and cons, there is, without doubt, some truth involved. Jeffrey Epstein and “Madam” Maxwell are all the evidence you need.

The gruesome twosome’s despicable actions and the irreparable damage they caused is indisputable. Well, in Epstein’s case anyway—at this point, Maxwell’s level of participation and guilt has yet to be ruled on.

The fact that Epstein and Maxwell were “friends” and associates with a startlingly high number of über rich, powerful and famous men in the world of entertainment and politics is also indisputable.

But, they weren’t all liberals and Democrats though.

Trump himself was a very close buddy of Epstein’s, as was Kenneth Starr, Leslie Wexner, Alan Dershowitz, and William Barr, amongst a legion of other politically right-wing men. Because, hey, surprise surprise, pedophilia and human trafficking aren’t linked to political beliefs. They’re also not linked to pizza, although, it’s reasonably safe to say the vast majority of people in the western world have eaten at least some pizza in their lifetime.

Pizzagate is just a classic example of hyper-partisan political weaponizing, plain and simple.

“What’s happening in the US over the last year or two is that conspiracy theorizing is being deployed as a political weapon,” Viren Swami, professor of social psychology at Anglia Ruskin University, wrote in a study he conducted on conspiracy theories. “And that’s a very big change in the way that conspiracy narratives are being used.”

Don’t look in the basement!

Any horror movie fan worth their salt in popcorn knows only too well never to look in the basement. Bad things always happen in the basement! It’s dangerous down there!

The basement becomes even more dangerous in real life, though, when it comes to pedophilia and human trafficking. Because the ACTUAL perpetrators get a free license all the time people are buying into the deep state “cabal” satanic pizzagate basement bullshit rhetoric.

Here are some actual, verifiable facts—not “alternative facts” and not from an anonymous troll on 4Chan:

The International Labor Organization estimates there are 25 million victims of human trafficking around the world right now. It’s an issue for all countries and all communities. It involves all classes of people, from rich to poor, across the whole political spectrum. 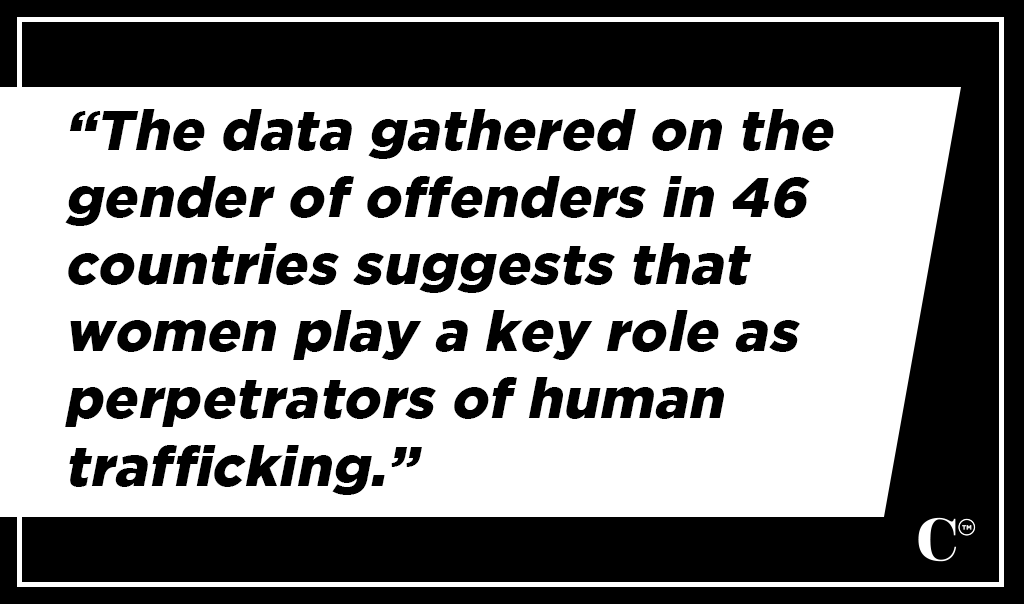 The primary motivator for engaging in human trafficking is, of course, money—it’s estimated to generate $150 billion in profits a year.

Asia-Pacific is the leading destination for trafficked victims, totaling over 70%. Europe and Central Asia account for 14% and the Americas 4%.

According to an extensive report from the United Nations Office of Drugs and Crime, “The data gathered on the gender of offenders in 46 countries suggests that women play a key role as perpetrators of human trafficking. In Europe, for example, women make up a larger share of those convicted for human trafficking offenses than for most other forms of crime.”

The report’s author, Antonio Maria Costa, signs off with a plea for governments to work together internationally to gather data if there’s ever to be any real hope of combatting human trafficking.

“The crisis we face of fragmented knowledge and disjointed responses intensifies a crime that shames us all,” Costa concludes.

He probably just loves pizza though…..

I’m putting all my faith in God’s anointed one to end pedophilia and human trafficking forever, all before the season 45 finale.