It's not every day that you have the opportunity to purchase a pair of royal underpants. And to think that

It's not every day that you have the opportunity to purchase a pair of royal underpants. And to think that there's underwear out there worth more than your monthly rent. Yep. You heard that right. It's been estimated that underwear previously owned by Prince Harry could net up to $1 million.

I See London, I See France, I Bought Harry’s Underpants 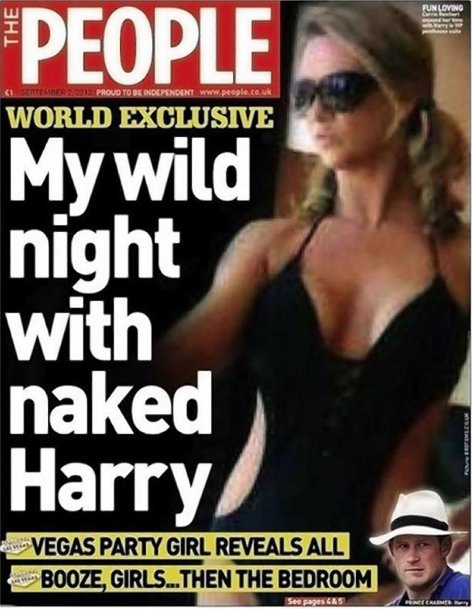 On August 11, around 10:30 p.m. a live auction will take place at Larry Flynt's Hustler Club in Las Vegas for guests to bid on a royal keepsake. Former stripper, Carrie Royale, also know as Carrie Reichert is pawning off Prince Harry's underwear along with a dress and swimsuit of hers as a 10th anniversary remembrance of the Prince's "wild" days.

In a comment, she stated, “I am so thrilled to be able to auction off Prince Harry's underwear at the premier nightclub in Vegas, Larry Flynt’s Hustler Club." Adding in, "Rumor has it that Harry himself visited Hustler the weekend of his infamous naked party, so it all comes full circle. I am holding the auction to help remind Harry of his fun side, the side that his wife Meghan has tried to control. But beware, that wild side can come out at any time, especially when Harry visits Vegas next.”

The auction will be interactive for guests to bid live or online. All three items – the underwear, dress and bathing suit – will have a combined starting bid of $10,000. And, if the bidding surpasses $800,000, the winner will also be gifted a vintage 3-liter bottle of 1996 Dom Pérignon "Rose" wrapped in 24 karat gold, a value of over $200,000.

But don't be fooled. This isn't all just for fun and games. Part of the proceeds from the sale will go to Prince Harry and his wife Meghan Markle's charity, Archwell.

70,000 Square Feet of Elegance And Seduction 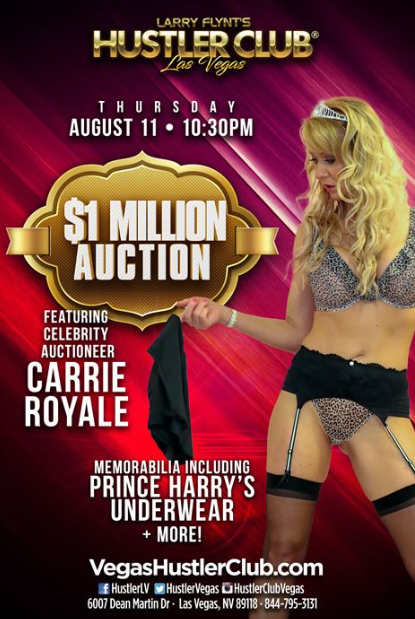 Larry Flynt's Hustler Club has become one of Las Vegas' top spots following its opening in September 2010. From the moment you walk in, you are taken over by seducing sights and sounds, spread across three floors.

Floor one withholds The Hustler Stage and Beaver Stage along with the Sexy Bar and Double D's Bar. This floor allows guests to move and groove with brighter lighting than the upper decks. This main floor is said to be the perfect starting point to what's going on up in floors two and three.

The second floor brings you to the VIP Bar and VIP Stage. "The VIP Stage displays a see-through glass catwalk that can be viewed from floor two at eye level or on floor one, above the patron," writes their site. This floor allows for a more intimate atmosphere with private suites for men with thick wallets to those "ballin' on a budget."

At the top is the roof. "Adorned by a relaxing cyclone of breezy curtains and cabaret-styled sofas, here you will find a comfortable escape from the action and address any special needs to suit the palette or the senses," all with a view. Spicy.

So, if you find yourself with some free time this week and couple extra hundred thousand dollars lying around, make sure to shoot your shot at Prince Harry's underwear. And, if that doesn't work out well, at least you made it to one of Las Vegas' iconic strip clubs.