Who is Q? Theory of Why QAnon Started as Controversial as Alt-Right Movement Itself

Who is Q has been the subject of countless articles, debates and arguments ever since he first popped up on 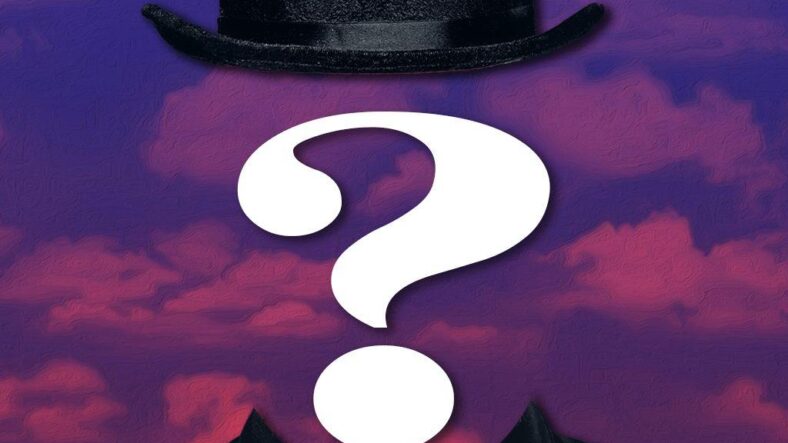 Who is Q has been the subject of countless articles, debates and arguments ever since he first popped up on 4chan back in late 2017.

The mysterious character, who sparked QAnon, in addition to a controversial theory about Q’s true identity and the agenda and origins of the movement itself, have divided the Alt-Right.

Alt-Right, Alt-Light or Not Right at all?

Just the very subject of whether QAnon is an Alt-Right movement or not sparks controversy in itself.

We spoke to one source, who asked not to be named as they’ve been subjected to mocking and ridicule for speaking out publicly about their beliefs, and even received numerous death threats.

The source is a longtime avid supporter and activist in the QAnon movement, and they insist that it’s NOT an “Alt-Right” group.

“The thing about Q is that it’s not Alt-Right as Q exposes both Republicans and Democrats, in addition to people who have been aligned strongly with the Alt-Right, like Alex Jones,” “S” claims.

Jones, the highly contentious and contestable founder of the website Infowars and the host of its affiliated radio show, was a high-profile Alt-Right, Q and QAnon mouthpiece and propagator.

However, he fell rapidly from grace and favor with the movement after publicly apologizing for promoting “Pizzagate” and threatening to expose Q’s true identity.

In August 2018, a year after the proclamation, Jones was banned from the majority of social channels, including Facebook, Apple, Spotify and YouTube—Twitter followed suit one month later.

They all released statements which varied to a degree, but in essence, all blamed Jones’ “abusive behavior” and “hate speech” for their decision to ban him.

Today, we permanently suspended @realalexjones and @infowars from Twitter and Periscope. We took this action based on new reports of Tweets and videos posted yesterday that violate our abusive behavior policy, in addition to the accounts’ past violations. https://t.co/gckzUAV8GL

“Q is not an Alt-Right conspiracy as it exposes Deep State actors aligned with both parties,” “S” insists. “However, President Trump is part of the Q team so most Q followers are Trump supporters.

“Q is a military intelligence operation that is exposing Deep State corruption while actively fighting a shadow war. It’s not a cult—it’s simply an information dissemination operation that exposes this global cabal and encourages free thought.”

However, CelebMagazine spoke to an outspoken member of the Alt-Right, and he insists QAnon and Q are unreservedly tied to, and an integral part of, the movement.

The second source also insisted on not being named, but for different reasons however.

The second source was hostile and aggressive, claiming he had googled me and did not want to be discovered “collaborating” with a “FHO and SJW” who spreads “lies” via the “lamestream media.” I will refer to him as “I” for the purpose of this post.

Take a deep breath, here we go, I’m about to fall down the incel rabbit hole. Sigh!

“QAnon’s primary mission is to educate ‘sheeple’ who blindly follow and believe the ‘etymology’ that’s propagated by the ‘lamestream’ media,” “I” says.

“QAnon’s purpose is to open their eyes to the ‘wrongthink’ that’s brainwashed them for decades, and teach them to actually think for themselves instead of blindly following what they’re falsely told and taught by ‘globalist elites’.

“Sheeple think they know what’s hapening, and believe they have the ability and methods to seek out alternative and true information, but that’s all controlled by ‘TPTB’ like Google, so they’re all just being controlled by the ‘goolag’ ultimately.”

“The ‘meeks’ need to be ‘blackpilled’ because if they’re not and they’re not smart enough to understand they’re being played, then ‘leftism’ has to be wiped out, by all means necessary.” “I” warns ominously.

“QAnon is proud to be Alt-Right, and even prouder to stand with President Trump, the greatest leader this country and the world has ever seen.”

“There’s an off-shoot from the Alt-Right though, and I’ve got no respect for them,” “I” continues. “The Alt-Light are dissidents, they’re poison and they’re the enemy too. They’re weak and I don’t want ‘cucks’ around me when the ‘genocide’ begins in real. I want blood and soil.”

OK “I”! So a bunch of incel nazis then, presumably?

Q first started posting messages on the /pol/ board of 4Chan on October 28, 2017 under the name of Q Clearance Patriot, in a thread titled “Calm Before the Storm”.

The mystery poster claimed to hold “Q clearance” a security status that’s granted only to the highest members of the U.S. government, allowing them access to top secret information about nuclear weapons and materials.

In addition, Q appears to know the intricate and top secret details of the government’s motivations, plans and agenda—in addition to the intimate thoughts of Donald Trump.

READ MORE: Dear White People—Let’s Focus on WHY Not WHAT BLM Protestors are Rioting & Looting

Q performs “drops” on message boards of supposedly vital U.S. and global political secrets, which followers refer to as “crumbs”.

QAnon is infamous for its use of “insider” terms and acronyms, and has even created its own glossary of words, several of them, bizarrely, stemming from the Keanu Reeves’ blockbuster movie franchise, “The Matrix”.

QAnon was formed in November of 2017, supposedly with the aim of awakening the general public to the “truth” by sharing the “crumbs” gathered from Q’s “drops”.

One major objective is to publicize what Q claims to be a secret “deep state” plot against Trump and his supporters.

Drawing on Q’s many “drops” of “crumbs” which are usually composed of riddles and cryptic clues, QAnon sparked the “pizzagate” controversy.

They publicly named and shamed a slew of Hollywood actors, politicians, international performers, high-ranking officials and even the Queen of England, as all being part of an international child sex trafficking ring.

QAnon believes we are nearing “The Storm” or “The Great Awakening”, which, they claim, is when Trump will go public with the scandal, and carry out a massive number of arrests worldwide.

Apparently, that will result in all of the alleged perpetrators, which include many of Trump’s arch enemies, such as Barack Obama and Hillary Clinton, being sent to Guantanamo Bay and placed behind bars for ever.

QAnon’s many and varied claims over the years have led to them being labeled as a “deranged conspiracy cult” and “unhinged” by those who are not members of the group.

Travis View, a journalist for the Washington Post, which Trump refers to as being part of the “lying lamestream media”, summarized his take on QAnon’s ideology during an interview with Salon.com last year:

“They control politicians, and they control the media. They control Hollywood, and they cover up their existence, essentially. And they would have continued ruling the world, were it not for the election of President Donald Trump.

“Now, Donald Trump in this conspiracy theory knows all about this evil cabal’s wrongdoing. But one of the reasons that Donald Trump was elected was to put an end to them, basically.

“And now we would be ignorant of this behind-the-scenes battle of Donald Trump and the U.S. military — that everyone backs him and the evil cabal — were it not for ‘Q.’

“And what ‘Q’ is — is basically a poster on 4chan, who later moved to 8chan, who reveals details about this secret behind-the-scenes battle, and also secrets about what the cabal is doing and also the mass sort of upcoming arrest events through these posts.”

Hmmmm….. You have to wonder whyTrump regularly calls The Washington Post, Time and The New York Times, who famously broke the

“Watergate” scandal that led to Richard Nixon’s humiliating resignation in 1974, “the enemy of the people”.

Trump’s name calling tactics brings to mind the words written by George Orwell in his dystopian novel “1984”—which could just as easily be perceived as having come from Q himself, “War is peace. Freedom is slavery. Ignorance is strength.”

The formation of QAnon can be traced back to three people, a struggling YouTube creator and two moderators of 4chan—the very message board where Q made his debut.

NBC claims that the three (still unnamed) men took the early Q posts and spun them into an entire mythology, which became QAnon—purely for their own financial gain.

The three went on to create a wealth of video content, Reddit communities, and all sorts of merchandise—ultimately building a business empire, all off the back of “Q”.

Then comes the theory that’s at the heart of the splits that have been occurring in both the Alt-Right and QAnon itself.

Some believe the motives of the three founders were totally pure, and that they genuinely just wanted to spread the message and awaken the masses.

Others believe that the three started, popularized and promoted QAnon simply for their own financial gain.

Most controversial of all though is that a number of disillusioned QAnon followers have started questioning the validity of Q’s supposed identity and begun suggesting the posts were actually written by the three men themselves.

Not surprisingly, QAnon’s staunch believers remain steadfast in their support, and dismiss the claims as “stupid”.

“This story is so stupid,” “S” says. “No legit person in the Q community believes these dudes are Q.

“The main point I would say to these claims or any MSM claims about Q is this—President Trump not only knows Q is real and legitimate, he is part of the team. Posts that are signed off as Q+ are messages directly from POTUS and POTUS only.

“So for all these reporters who claim Q is a ‘conspiracy theory’, literally all they have to do is ask President Trump about Q. If Trump says Q is a hoax, then the Q movement is over. 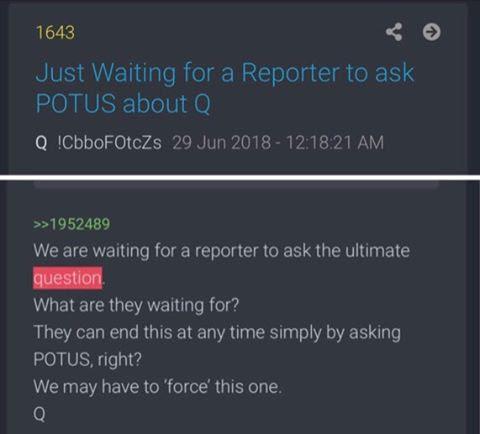 Meanwhile, I’ll give the last word to the great and wise, feminazi hating “I”, because it may well be 2020, but  as a woman, I still know my place.

“What the ‘normies’ don’t get, is that we’re not going away, we’re here to stay,” “I” vows. “Zuckerberg, Dorsey and the ‘Lamestream’ can try all they want to silence the ‘Shoa Survivors’ but the storm IS coming, the RaHoWa is coming, and we’re locked, loaded and ready to fight.”

“We don’t care if they believe in Q, or who the ‘real’ Q is,” “I” continues. “Because we don’t care about any of that otr them. All we care about is the truth. The actual, real, truth. Period.”

(Well, Praise be Allah for YouTube is all I can say.)