We are very saddened to hear the breaking news that beloved television host Regis Philbin has died at the age of 88. 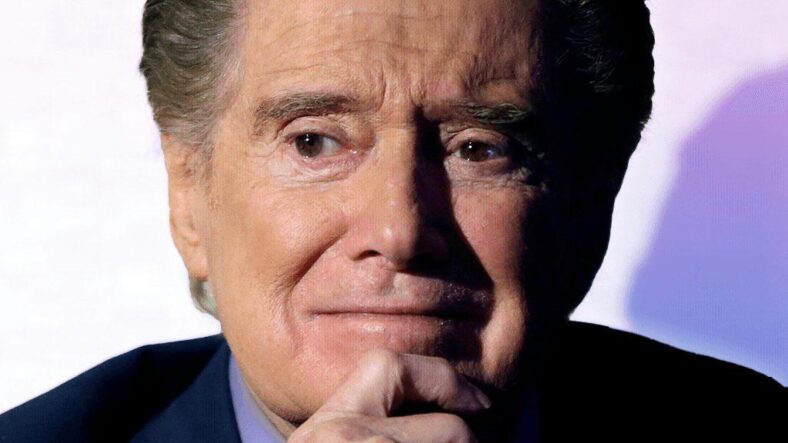 We are very saddened to hear the breaking news that beloved television host Regis Philbin has died at the age of 88.

In a breaking statement to People, his family confirmed the news. Here is what they had to say:

“We are deeply saddened to share that our beloved Regis Philbin passed away last night of natural causes, one month shy of his 89th birthday.

His family and friends are forever grateful for the time we got to spend with him – for his warmth, his legendary sense of humor, and his singular ability to make every day into something worth talking about. We thank his fans and admirers for their incredible support over his 60-year career and ask for privacy as we mourn his loss.”

Regis Will Always Be Remembered

Philbin was a legendary icon who rose to superstardom by hosting Live! with Regis and Kathie Lee on ABC with co-host Kathie  Lee Gifford. Their hit morning talk show began in 1988 and the pair were on the air together for 15 years.

After Gifford departed the series, Philbin was joined by new co-host Kelly Ripa and the show became known as Live! with Regis and Kelly.

In 2011, after spending 23 years with the show, Philbin departed. He was initially replaced by Michael Strahan and then by Ryan Seacrest in 2017.

Upon the news being released, Ripa and Seacrest released a joint statement via social media.

Here is what they had to say:

“We are beyond saddened to learn about the loss of Regis Philbin. He was the ultimate class act, bringing his laughter and joy into our homes everyday on Live for more than 23 years. We were beyond lucky to have him as a mentor in our careers and aspire everyday to fill his shoes on the show. We send our deepest love and condolences to his family and hope they can find some comfort in knowing he left the world a better place.

Michael Gelman, the executive producer of Live!, released the following statement via his social media:

“Devastated by Regis’ passing. He was a broadcasting legend as well as my friend, colleague and mentor for over thirty years. My heart goes out to Joy and his family.”

Hoda Kotb, host of The Today Show, took to her social media to release the following statement about Philbin’s passing:

“Heartbroken. We will miss you regis. Nobody like you .”

Cassidy Gifford, the daughter of Kathie Lee, released the following statement alongside a picture of her late father, Frank Gifford, with Philbin:

“The laughter I know you two are sharing together again in heaven is palpable… love you forever, Reeg ❤️.”

Who Wants To Be A Millionaire?

Aside from hosting Live!, Philbin was the first host of the wildly successful gameshow Who Wants To Be A Millionaire. He hosted this from 1999 to 2002.

During his career, Philbin also authored books including I’m Only One Man and How I Got This Way.

Interestingly, prior to hosting Live! with Regis and Kathie Lee, Philbin had hosted local talk shows including Regis Philbin’s Saturday Night in St. Louis and The Regis Philbin Show in San Diego.

Before becoming a talk show host, Philbin had served in the Navy and began a career in Hollywood as a writer. He also attended the University of Notre Dame, where he pursued a degree in Sociology.

His Family Lives On

Philbin is survived by J.J. Philbin and Joanna Philbin, his daughters. He is also survived by his wife, Joy.

Our thoughts and prayers are with them- and Philbin’s close friends- at this time. He will never be forgotten.