Resorts World Las Vegas is one of the most anticipated hotel openings of 2021. With exciting collabs between the multi-billion-dollar 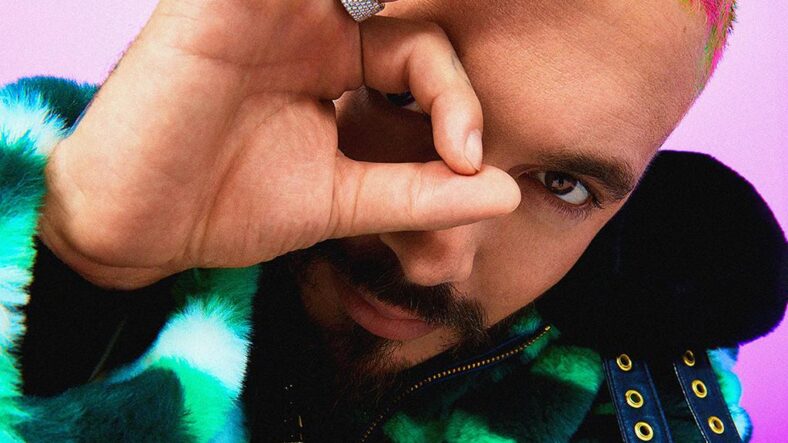 Resorts World Las Vegas is one of the most anticipated hotel openings of 2021. With exciting collabs between the multi-billion-dollar Las Vegas casino and luxury entertainment and dining venues like Wally’s and Gatsby’s, Resorts World is promising peerless experiences for its visitors. Now, they’ve upped the ante again, as they say in Vegas. J Balvin will be headlining a three-day music event in September, lovingly dubbed, “Neon,” and he will be joined by top Latin artists in crafting a unique and engaging adventure produced by Pollen, which creates music-driven destination experiences. 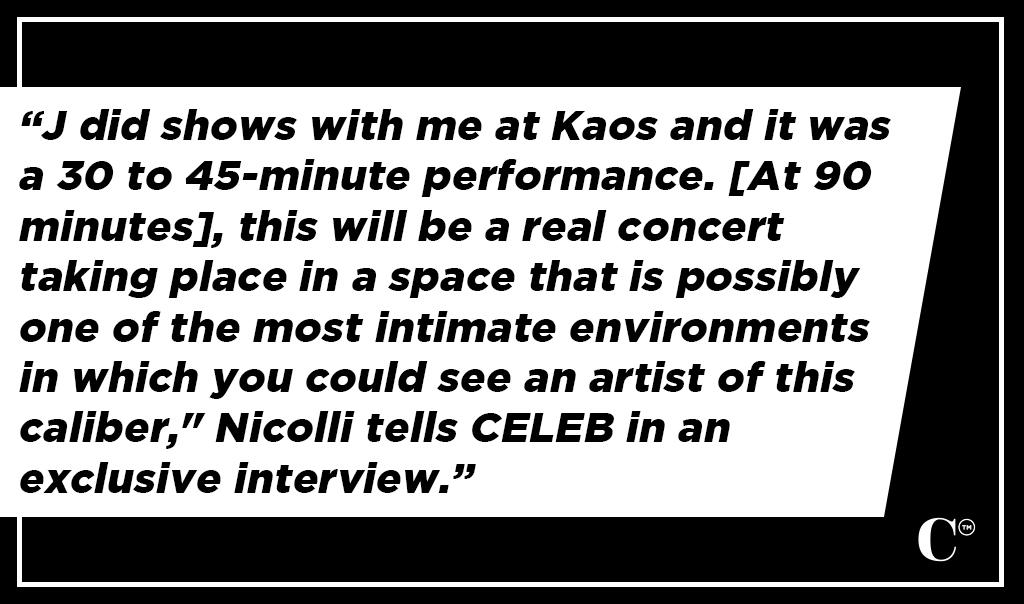 Billboard was first to report the event, which will be capped at 3,000 tickets per day/night. Those tickets should move swiftly (though at this writing, no on-sale date is announced).

Reportedly, the event will take place at the hotel’s many entertainment venues, centered around Zouk Nightclub and Ayu Dayclub. Balvin is set to headline a 90-minute show and perform from his Colores album for the first time. Balvin has not performed live in more than a year. He was previously a resident at Kaos Nightclub in Palms Casino Resort, where he worked with Ronn Nicolli, who is now vice president of nightlife for Zouk and vice president of lifestyle marketing for Resorts World Las Vegas.

“J did shows with me at Kaos and it was a 30 to 45-minute performance. [At 90 minutes], this will be a real concert taking place in a space that is possibly one of the most intimate environments in which you could see an artist of this caliber,” Nicolli tells CELEB in an exclusive interview. “When J was doing similar events in Colombia prior to the pandemic, it was 50,000 to 60,000 people—and now you’re getting that same experience in this super intimate environment. It’s meaningful. It’s one of those things people will remember 30 years from now.

Touting the high-tech production capabilities of both Zouk Nightclub and Ayu Dayclub, Nicolli says there is an incredible opportunity for artists to create content and indulge fans in the immersiveness of the spaces. “Ayu is a destination—the space brings a lot of authenticity. [It feels] like you are outside of Las Vegas.” He also notes that “Neon” is Thursday and Friday, gives Resorts World an opportunity to activate around the other events happening in town that weekend. And what a busy time it will be.

The event is scheduled for Mexican Independence weekend, September 16 to 19. With Resorts World set to open this summer, J Balvin’s event will be one of the first, and certainly one of the biggest, music events for the property. Life is Beautiful festival also takes place in Downtown Las Vegas September 17 to 19 and iHeart Music Festival normally coincides with those dates, but has yet to be announced. 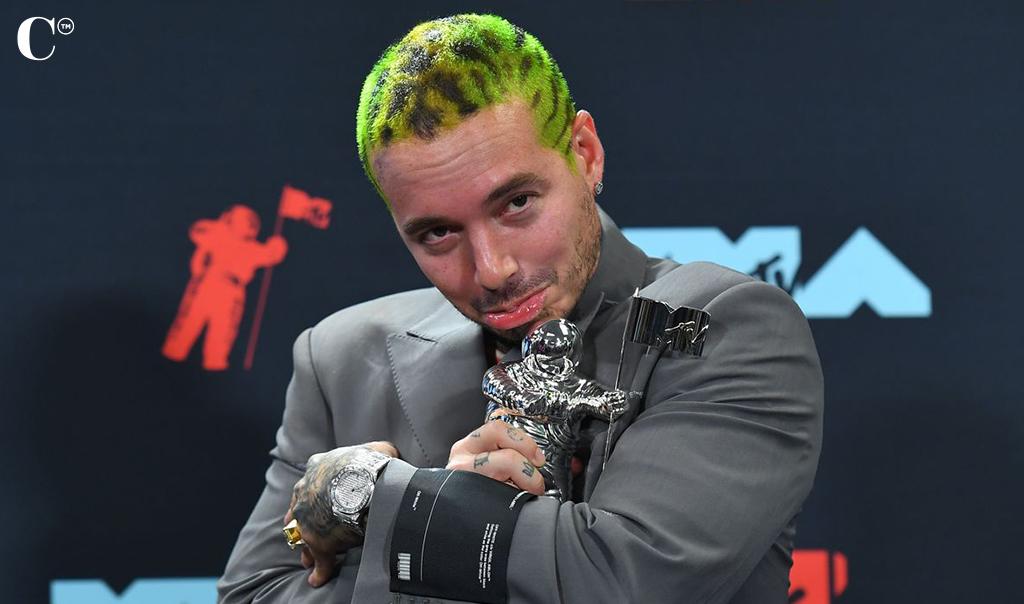 J Balvin will be joined by a number of talented musicians and DJs. Billboard reports, “Also included in his roster of events will be DJ Alex Sensation, Cornetto, DJ Pope, Agudelo888 and Matt Paris and La Gabi, the first two artists Balvin signed to his own label.

“It’s the first event we’ve announced since the pandemic,” says manager Fabio Acosta, noting Balvin’s last concert was more than a year ago. “He will curate the entire weekend, down to the artists and themes. It’s the first time we do an event like this.”

With hope on the horizon and an exciting 2021 line-up already announced, including the sold-out Life Is Beautiful festival, fans of the Vegas music life are waiting with bated breath to hear what may be announced next.

And now for the moment we have all been waiting for—who exactly will be getting residency at Zouk Nightclub? Nicolli says those announcements are coming soon. “We are making commitments to artists at this point,” he explains. “We look for partnerships or residency opportunities that are for multiple years.”

“I love working with J,” he says. “My hope is that something longer standing does get developed through ‘Neon.’ I would love nothing more than to see him have a residency on property. But for right now, we are concentrating on having a great event. After that, I’m definitely going to want to have some conversations, as I’m sure with the success of this event, other properties are going to want to have conversations with him as well.”

One thing Nicolli will divulge is to expect more diversity and inclusivity in the forthcoming announcements. Women have always been notoriously absent from the headliner spots in Las Vegas nightclubs, but that is about to change. Many of the major nightclub roster announcements of the last decade have included dozens of male artists with little to no presence from female artists

“I think you’re going to be excited our roster will be from the genres to the great personalities that are coming into play. [There will be a] selection of super-talented female artists that will be part of this property,” he says.

Resorts World Promises Everything for Everyone 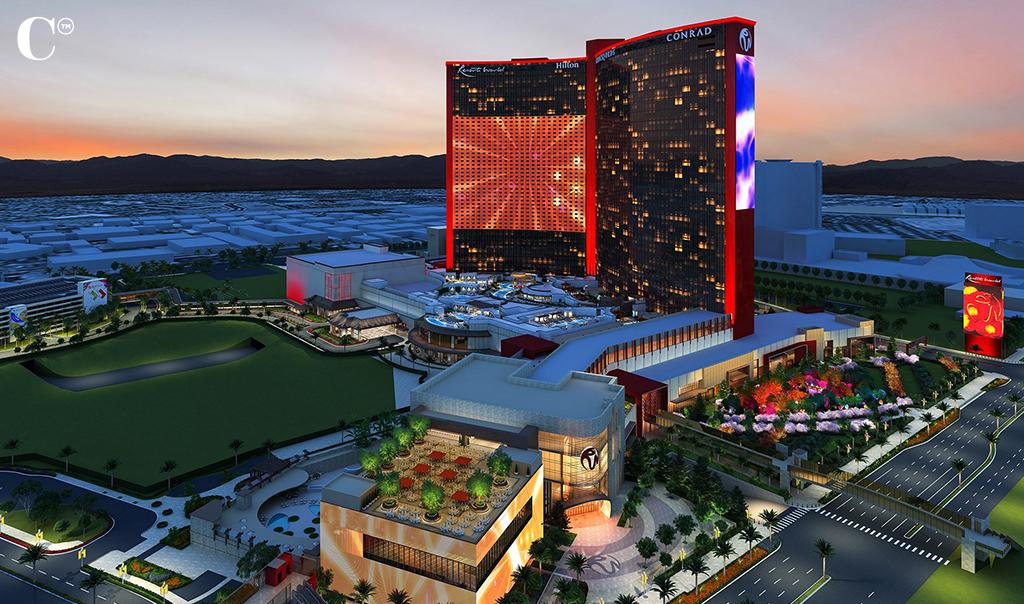 Resorts World isn’t just promising a luxurious place to stay. They’ve carefully curated partnerships with a number of unique and exclusive businesses. From the ultra luxurious Gatsby’s lounge, to the first non-LA location of Wally’s Wine and Spirits, Resorts World promises a little bit of everything for everyone. The goal is to make it accessible to both out of town visitors staying on site, and those from the community. With dining, entertainment and shopping at your fingertips, you indulge on almost any budget. 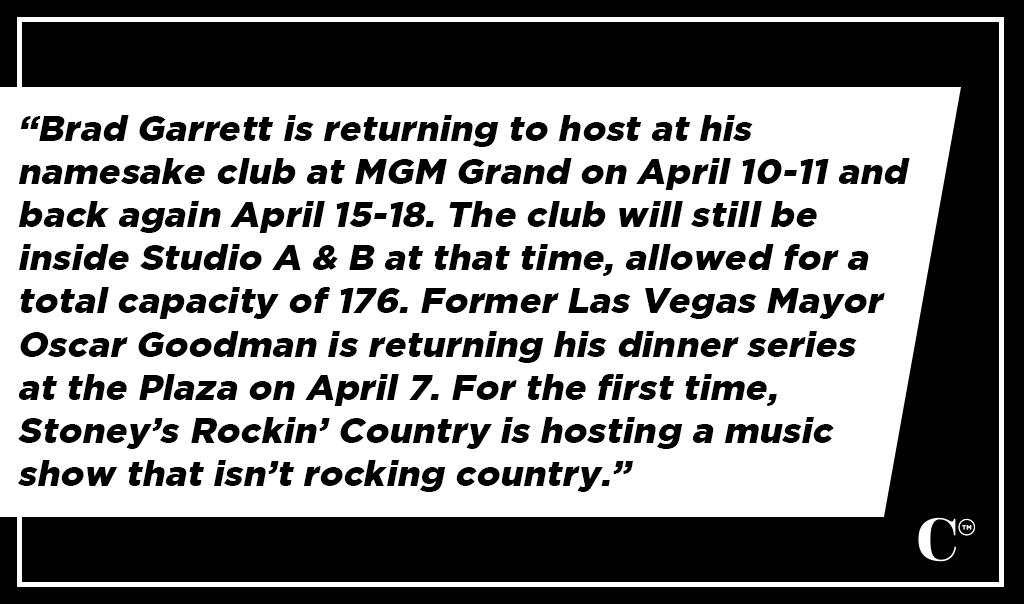 The Resorts World event is not the only exciting announcement made in recent days. As vaccination roll-out continues, entertainment venues across the country are slowly airing out the cobwebs and opening back up for customers. The hard-hit hospitality and entertainment industries are breathing a sight of relief as an end is in sight.

“Brad Garrett is returning to host at his namesake club at MGM Grand on April 10-11 and back again April 15-18. The club will still be inside Studio A & B at that time, allowed for a total capacity of 176.”

“Former Las Vegas Mayor Oscar Goodman is returning to his dinner series at the Plaza on April 7.”