The Real Housewives of Orange County star Kelly Dodd is under fire for some more than questionable behavior at her bridal shower. Not only did all 15 attendees not wear masks at times amid the COVID-19 pandemic, but nobody respected social distancing guidelines. On top of that, Dodd was seen wearing a hat that many consider insensitive at best, bordering on racist. Dodd, however, doesn’t see the problem and is defending herself.

Over the weekend, Dodd posted pictures of herself and her 14 best friends ringing in the next landmark event of her life; her bridal shower. In the first set of images, Dodd shared, the group of women is seen sitting together outdoors, no masks in sight, very close together. While being outdoors does minimize the risk of spreading COVID-19 somewhat, it doesn’t negate it entirely. The women sitting so close together without masks puts them all at risk. Dodd captioned the images, “What an amazing bridal shower !! Thank you @jodishamaley @samantha_gesuale @jacquelinelee1234

for throwing me the most amazing shower ❤️❤️❤️u guys.”

After facing a backlash online due to the mask-less images, Dodd shared another set of images, mostly of the women indoors and wearing masks. However, in the exact same set of images, there are more mask-less pictures of the attendees, this time without masks indoors. Dodd captioned the images, “People were asking where are the masks?? Well here they are !! Thanks @vvndao.”

E! shares that users left critical comments under the images; “comments such as, ‘Looks like a great Covid party!’ and ‘Useless waste of time too many sick and dying…I guess it has to hit home and I don’t wish that on anyone,’

‘yeah if you are compromised…let’s talk about the people losing their businesses and losing their jobs and looting and alcoholism and divorce rates…’ Kelly responded to the latter. ‘I think the cure is worse than the disease…shutting down the economy…I feel bad for everyone!’” 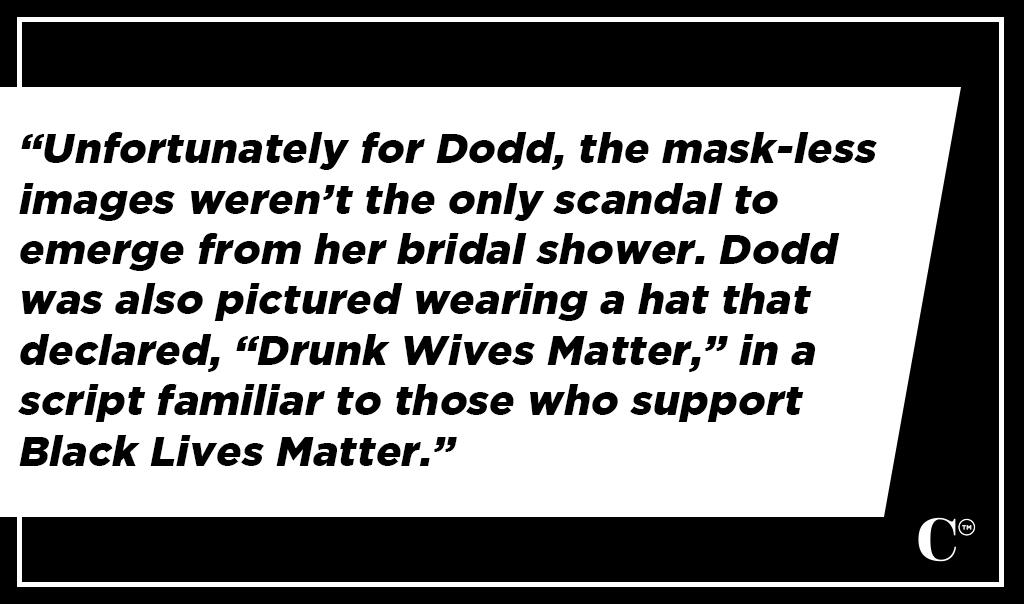 Unfortunately for Dodd, the mask-less images weren’t the only scandal to emerge from her bridal shower. Dodd was also pictured wearing a hat that declared, “Drunk Wives Matter,” in a script familiar to those who support Black Lives Matter.

According to E!, “One commenter described it as ‘a bit insensitive,’ but Kelly replied, ‘It’s not…my girlfriend bought it for me as a gift. It’s a play on words. Some people aren’t that smart.’

In a now-deleted Instagram video, Kelly and a friend addressed the hat, calling it a ‘joke’ and explaining that she didn’t buy it herself.

‘You know what, all lives matter,’ Kelly added. ‘People that can’t get a joke, go f–k yourselves.’”

Whatever Dodd’s argument might be about who bought the hat and what the intent is, it is inarguably insensitive given the state of racial tensions in the US this year.

Why Was the RHOC Premiere Date Pushed Back? 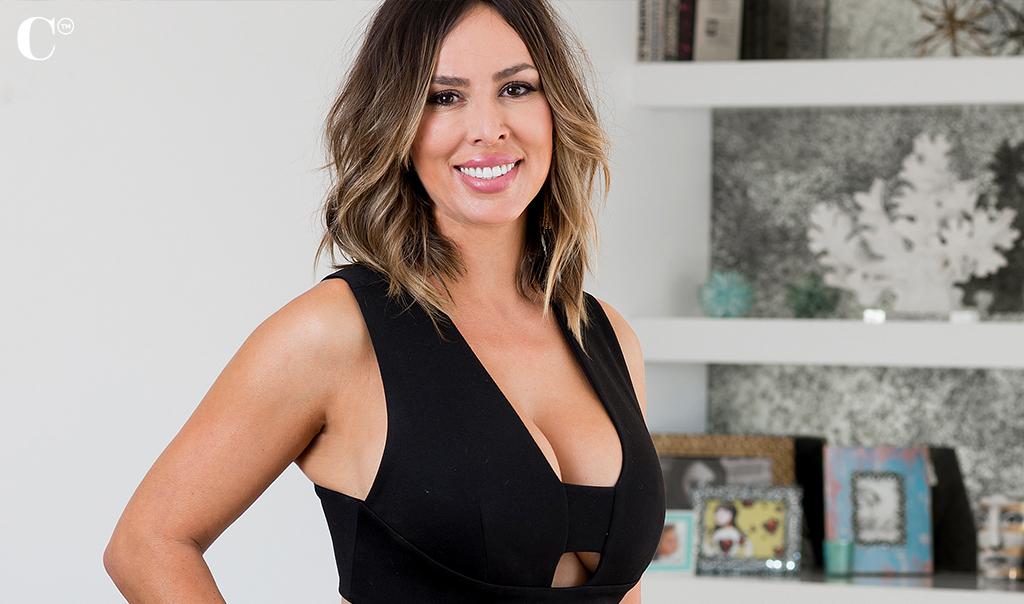 Originally, RHOC fans should have been watching the first episode of their favorite show’s 15th season this week. Without explanation, the show’s premiere date was pushed back by a week, set now to air on October 14th. Why the change?

The answer may be in Dodd’s hat. While this isn’t the first insensitive thing Dodd has said about racial issues, this is certainly coming in the midst of heightened tensions. Although the hat incident happened after the date was pushed back, fans speculate that Dodd’s behavior in general has brought bad press to the show and they’re eager to let things settle down before the premiere date. Dodd’s untimely hat gaffe and pandemic party dashed those hopes.

What Has Dodd Said In the Past? 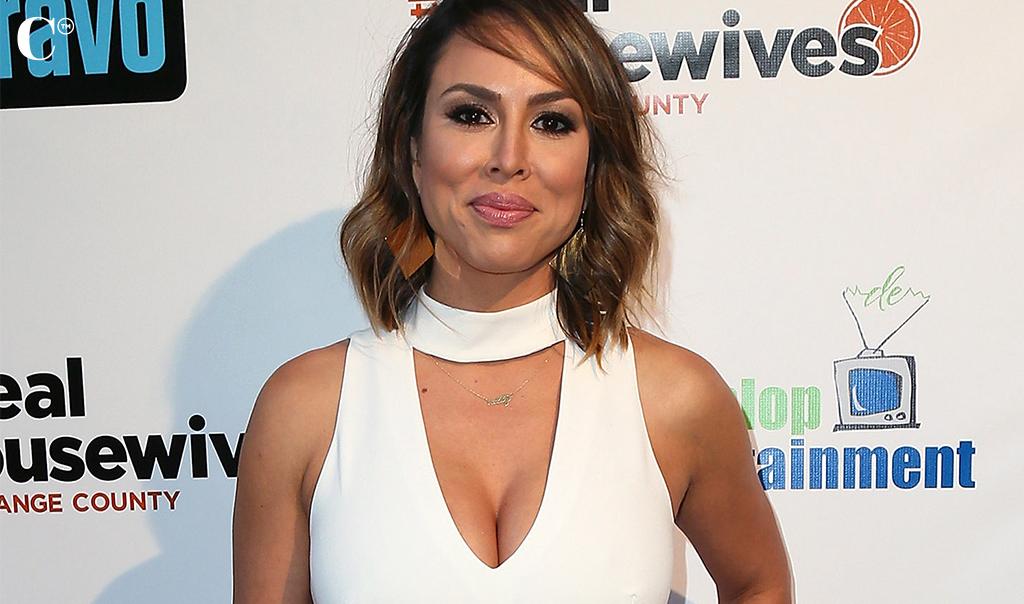 It isn’t surprising to many that Dodd, who is engaged to Fox News Senior Correspondent Rick Leventhal, has trouble with sensitivity. In April, Dodd came under fire for asking if the coronavirus pandemic was, “God’s way of thinning the herd.”

After a commenter called Dodd out for flying just as the pandemic was getting off the ground in the Spring, Dodd fired back, “‘If it’s dangerous why are the airlines still flying?’ Dodd wrote in the comment section. ‘You think I want to fly? I had to get back, how is that elitist? People are so judgemental [sic] it’s sick!’

‘Do you know how many people died from the H1N1, the swine flu or SARS?’ Dodd continued, writing, ‘It’s 25% get your facts straight you are only hearing numbers not the reality! It’s God’s way of thinning the herd! If you are vulnerable or compromised stay inside. If you don’t protect others by wearing masks and gloves keep your distance and don’t go out if you are ill!! It’s common sense!’”

Dodd did later apologize, saying on an Instagram story, “I feel bad for all the families that have lost loved ones, and I do think we should all stay at home and protect everybody. That’s not what I meant, and I want to apologize to anyone who got offended.”

Despite Cavalier Attitude, The Wedding Will Include Masks 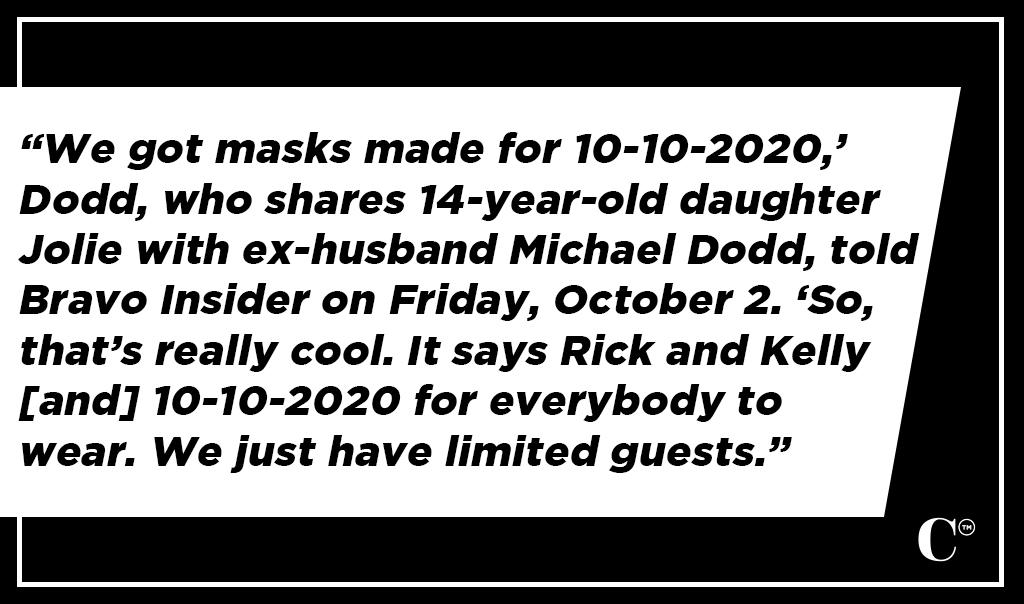 Despite Dodd’s desire to downplay the severity of the COVID-19 pandemic, she and fiancé Leventhal have made one important concession; they’ve ordered masks for their wedding guests.

If Bravo pushed the premiere date back to avoid more Dodd drama, they probably now wish the day would hurry up and get here before she causes even more.