This season of The Real Housewives of New York City has certainly been one for the record books. A lot

This season of The Real Housewives of New York City has certainly been one for the record books. A lot of the drama on last night’s episode surrounded new cast member Leah McSweeney dealing with the aftermath of Ramona Singer’s birthday party. At her birthday party, Singer felt that McSweeney behaved inappropriately and spent much of the episode avoiding talking to her. Also in the episode, Singer outed the fact that she’d heard McSweeney has bipolar disorder.

Today, we spoke exclusively with Countess LuAnn de Lesseps, who has been on the show since the  first season. We spoke about Singer’s birthday party and the drama with McSweeney, as well as drama surrounding de Lesseps’s famous cabaret show, Bethenny Frankel, and de Lesseps’s new skincare line.

“I think that Ramona judges Leah very harshly because she feels like a mother to her in a way,” de Lesseps began with sharing with us on why she felt Singer was so upset and critical of McSweeney’s behavior at her birthday party but not of longtime friend Sonja Morgan’s (who stomped on glass at the same party). 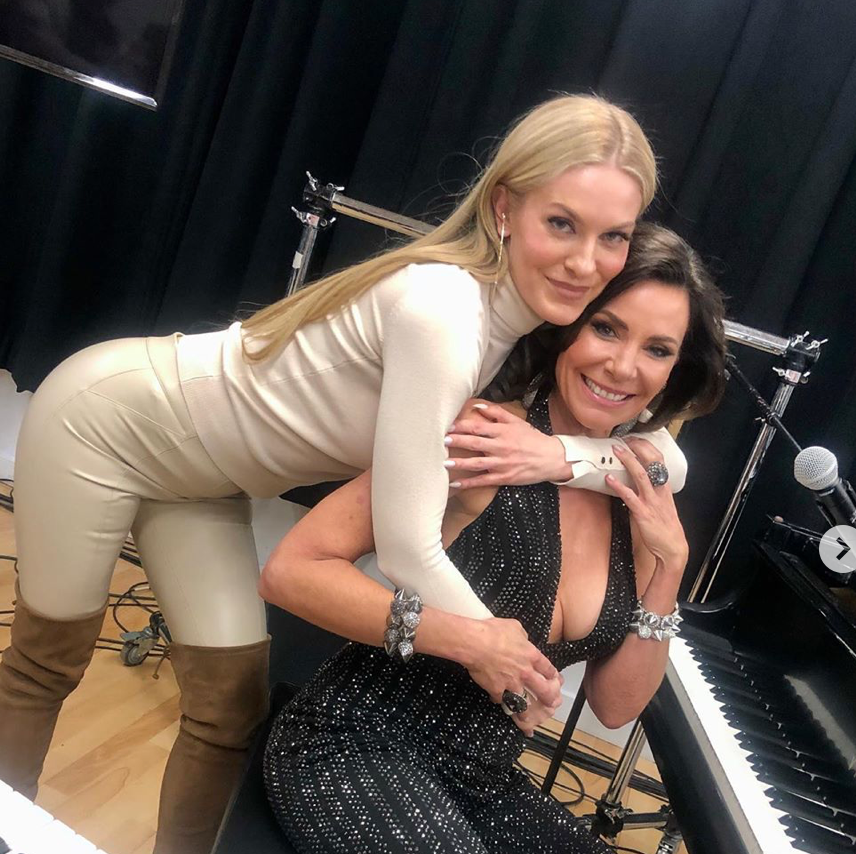 “She’s very mothering of her [Leah],” de Lesseps continued. “So it’s like her daughter misbehaving at a party, whereas Sonja she’s so used to seeing her misbehave it doesn’t even phase her.”

So what does de Lesseps make of McSweeney’s drinking- and her behavior when imbibing?

“I’m no doctor and I’ve got my own issues to deal with,” de Lesseps detailed, “but I think that Leah didn’t drink for a number of years. And when you see what happens when she does drink you can understand why.”

We then asked de Lesseps about Singer’s comments on last night’s episode regarding McSweeney’s mental health problems and Singer using them as a means to gossip about McSweeney.

“I think that one should not toy with people’s mental health,” de Lesseps stated. “I really don’t. I think for her to kind of talk about that is not for Ramona to do. It’s for Leah to do.” 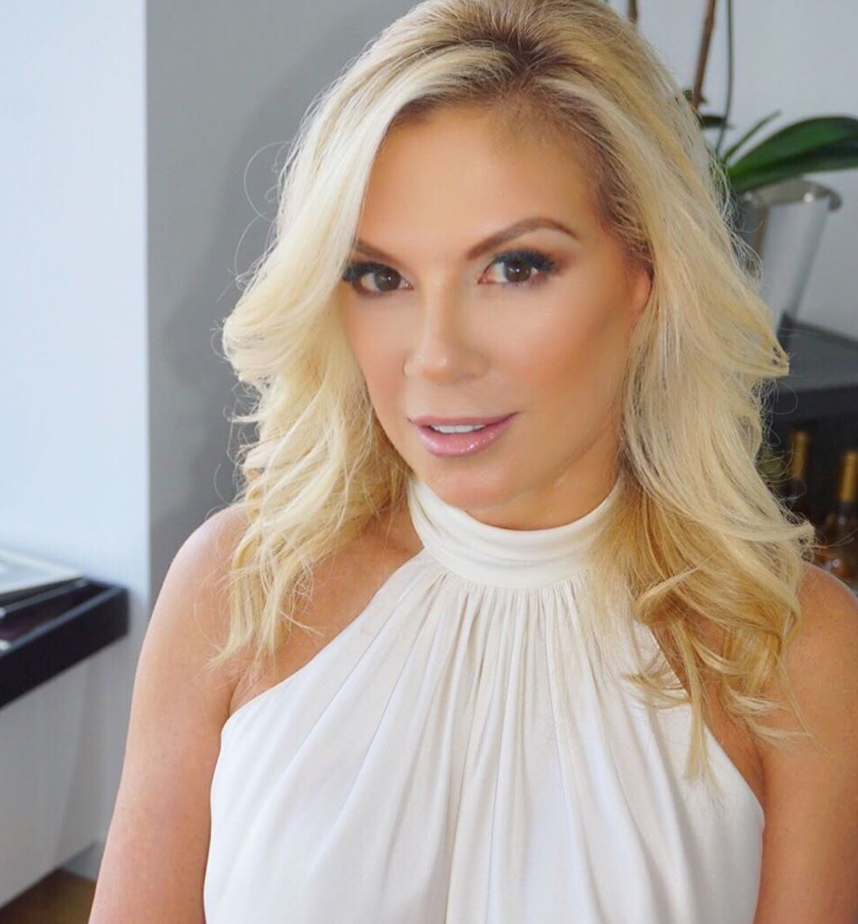 “I think that she [Ramona] crossed the line there,” de Lesseps added.

Life Is A Cabaret For The Countess

We then got into speaking with de Lesseps about the drama between her and Morgan a few weeks back, when Morgan accused de Lesseps of not paying her appropriately to be in her cabaret show. 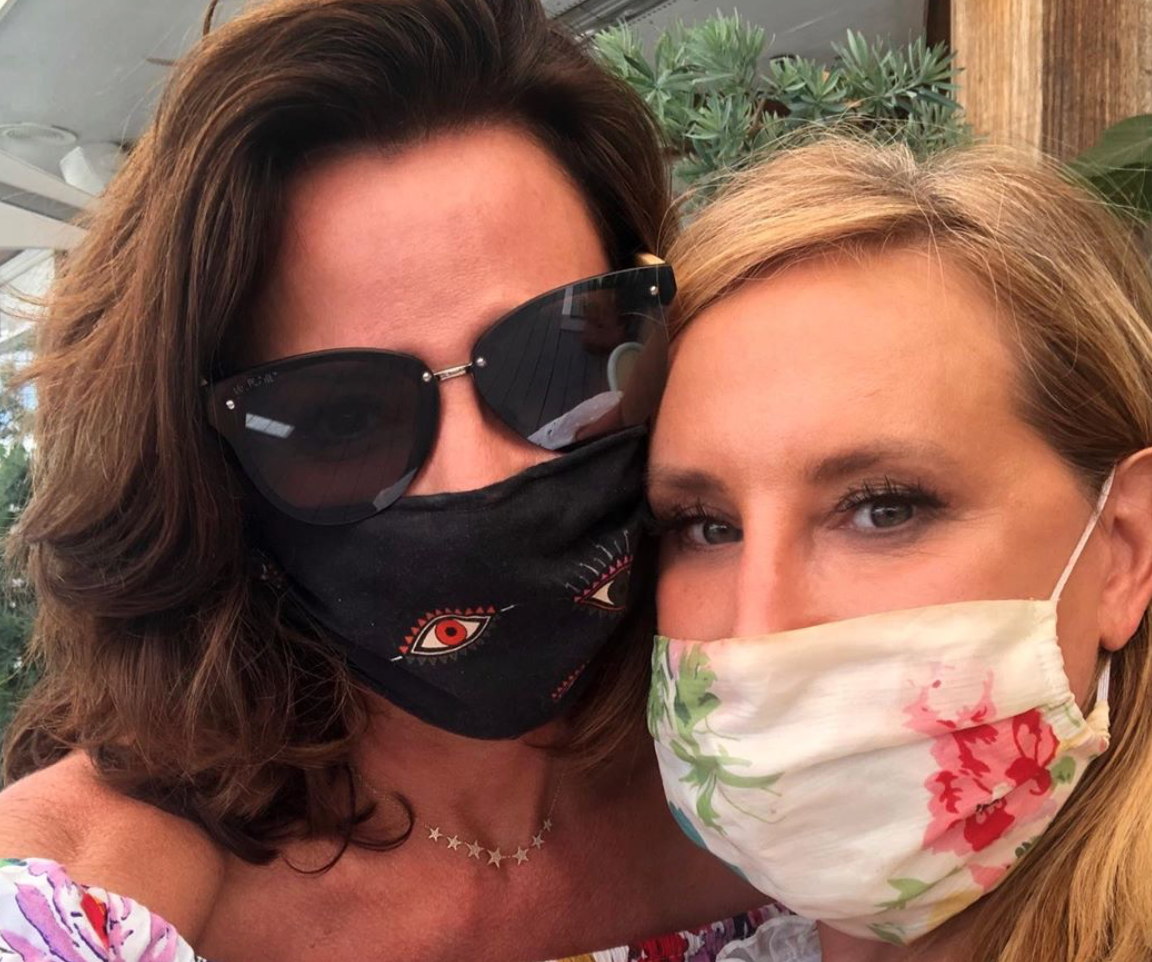 “When I started the cabaret,” de Lesseps added, “I wasn’t making any money and it was really not my decision first of all, because I have a director who was hiring all the talent. So it wasn’t up to me at that point and I really wasn’t making money. That I wish I could’ve explained better, but I drank too much [that evening that you saw on the show].”

We then asked de Lesseps as to why she feels Dorinda Medley, who came to the defense of Morgan that evening by pointing out that de Lesseps had been arrested, always feels the need to bring up de Lesseps’s arrest and mugshot, especially since de Lesseps has always been open about this and never hidden it.

“It is cruel,” de Lesseps stated to us. “It is very cruel. It says a lot about her own self. She seems to put this in her back pocket and try to use it whenever she feels like she needs to defend herself, but It really turns the tables and makes her look mean.” 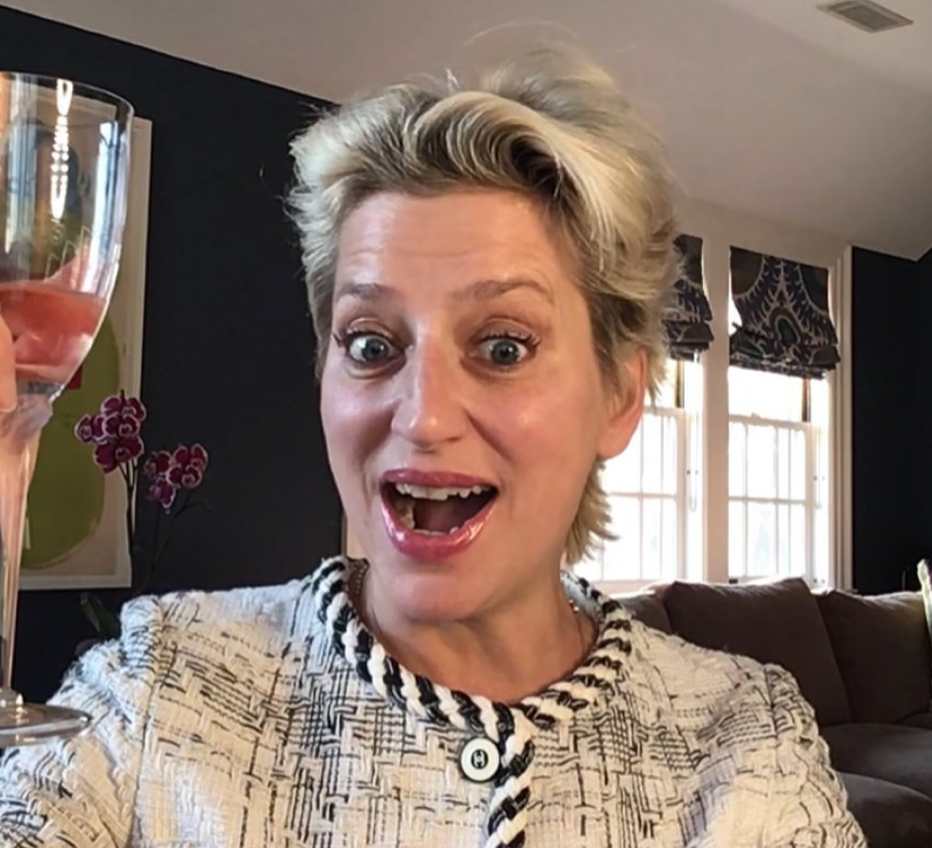 Speaking of the cabaret, we couldn’t help wondering if de Lesseps felt that the reason the women always seem to attack her over it is due to jealousy.

“They don’t give me credit where credit is due,” de Lesseps also noted. “They never have and I don’t think they ever will.”

We then asked de Lesseps about the scene in last night’s episode where she brought women from The Fortune Society- an organization that supports successful reentry (to society) from incarceration- to a spa day.

“It’s so wonderful,” de Lesseps told us. “Listen, these women are amazing and they are so beautiful inside and out and I just wanted to do something to make them feel good. If it’s only for a day- they so deserve it to feel special and look beautiful. I wanted to- one small thing I could do was to do this for them. And they really appreciated it and were so grateful and they’ve gone through so much and suffered so much, I wanted to pamper them for a day. It was nice. It was a beautiful moment.”

We then bought up Bethenny Frankel, who left the show after season 3, then returned, and then left again unexpectedly this season. We were curious if de Lesseps still spoke to Frankel and what she thought about the show this season without her.

“I have not spoken to her,” de Lesseps explained. “I wish her the best. I can’t say that we miss her because the show is even better this season without her. I wish her well on her endeavors, but we’re doing just fine. She takes up a lot of oxygen in the room and I feel like we can all breathe a lot easier [without her on the show].” 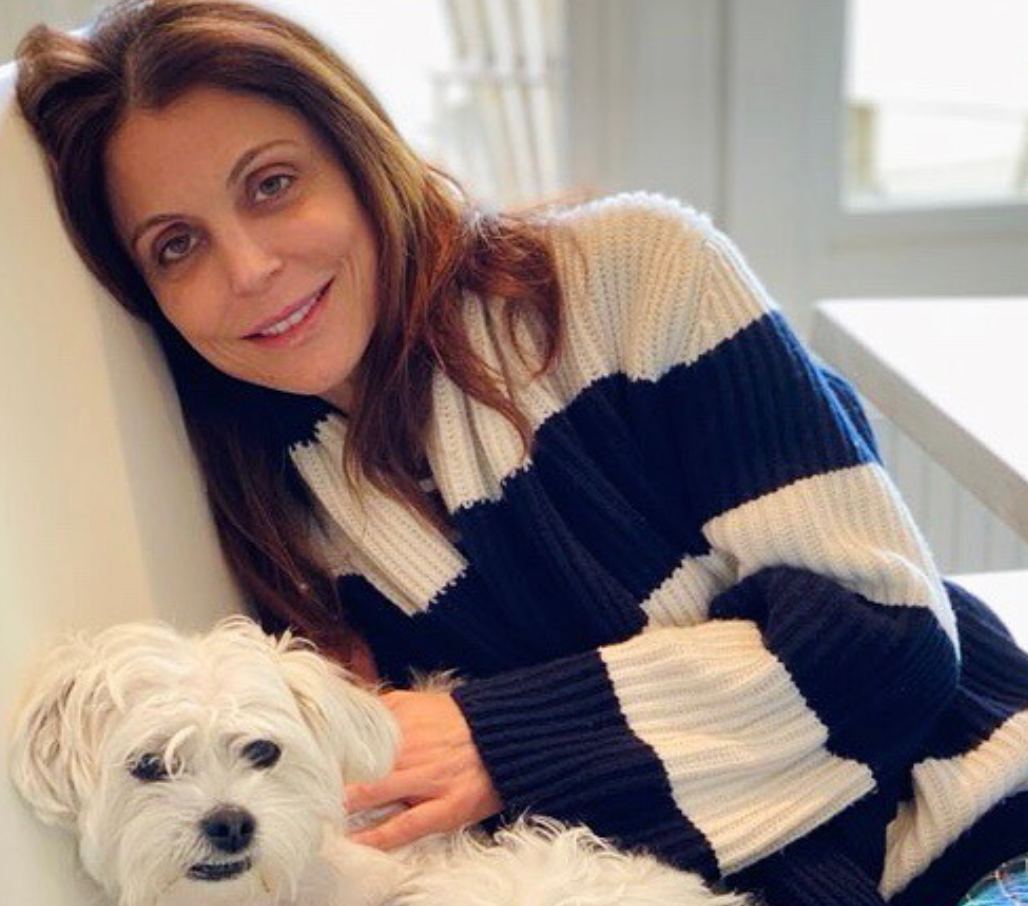 “She left the show before and when it didn’t work out for her, she came back,” de Lesseps continued sharing. “So we’ll see what happens.”

“I personally think that it is a cushion for her and the show moves on, though,” de Lesseps added. “It’s a chance that she takes to not be on the show. Will she come back or not? I don’t know. It just depends. It depends on how the show moves forward. I’ve tried to bring Jill [Zarin] back and somehow it just never pans out.”

Speaking of Zarin, we asked de Lesseps about rumblings that Zarin was supposed to be featured more heavily on the show, but then after an argument with Medley at de Lesseps’s Halloween party that ended up not happening.

de Lesseps confirmed the rumors, stating that “There was something that went on between Dorinda and Jill and, yeah, so we don’t get to see her much more the rest of the season.”

“I always try to bring her back,” de Lesseps added. “We’ll see.”

Recently, de Lesseps also unveiled a skincare line with Sonage. We were curious about what she could share about that- and where fans could buy it.

“It’s on CountessLuann.com or on Sonage.com,” de Lesseps shared. “Sonage is a French brand. It’s been around 25 years and the name means ‘looks good for her age.’ It’s a brand I’ve used for a long time and that I personally love. [It’s a brand] that has been in spas and used by estheticians, so they approached me to do a collection with them.”

“I’ve taken the products that I love and put them in a survival kit which are my go to products,” de Lesseps elaborated. “The brand is Botanical so cruelty free, and made right in Los Angeles. So it’s day and night products. There’s no confusion. And all of the products are really great. My favorites are the go to glow glycol peel pads and there’s a soothing tonic mist which is amazing. And the souffle cream is as delicious as it sounds. It’s my skincare routine that I’m sharing with the fans that are always saying to me I look good for my age.”

There’s always something exciting going on in de Lesseps’s world, and we knew before the pandemic began she was developing a new cabaret show, Marry, F**k, Kill. We were curious where things stood with that.

“Once this is over [the pandemic]. I have tour dates coming up in 2021,” de Lesseps revealed. I’m super excited because I miss performing and I miss being on tour and I’ve got an all-new show with Marry, F**k, Kill and I’m really excited to debut. The tour will continue.” 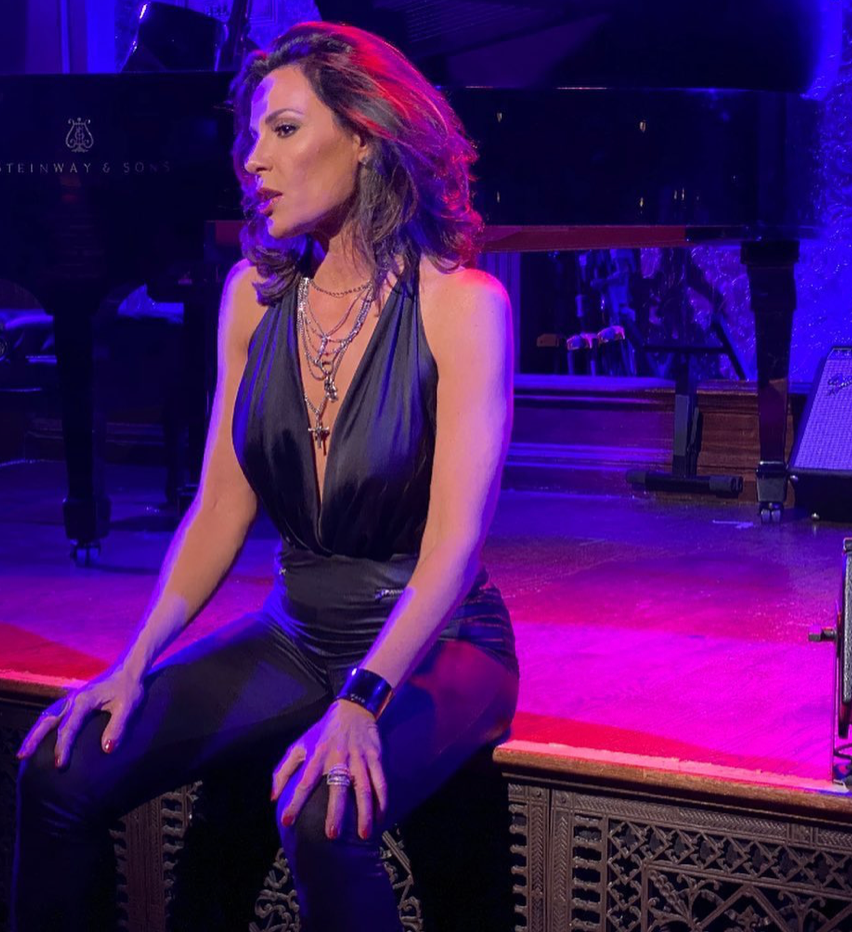 For fans of her music, de Lesseps then excitingly revealed to us that “I have a new song coming out with Desmond Child at the end of August called Viva La Diva. I’m excited to add that to the show and for people to hear the new song. Desmond’s written Living on A Prayer and Livin’ La Vida Loca. He’s a Grammy-winning producer and I’m thrilled to be able to work with him and super excited about the new song.”

Also, The Real Housewives of New York City reunion taping is coming up- and it will be in person, and not on Zoom.

To this, de Lesseps shared “I’m sure they’re going to meet all the protocols and have us socially distanced and I’m personally excited to actually do it in person and not via Zoom.”