Usually when you think of school board meetings, you think of lively debates about the lengths of shorts, or math

In Florida, the governor was handed a stinging loss today in court over his attempt to ban school boards from enacting mask mandates by way of executive order. While proponents of universal masking in Florida may be breathing a little easier tonight in the wake of the court ruling, it’s just the latest battle in an unlikely arena. 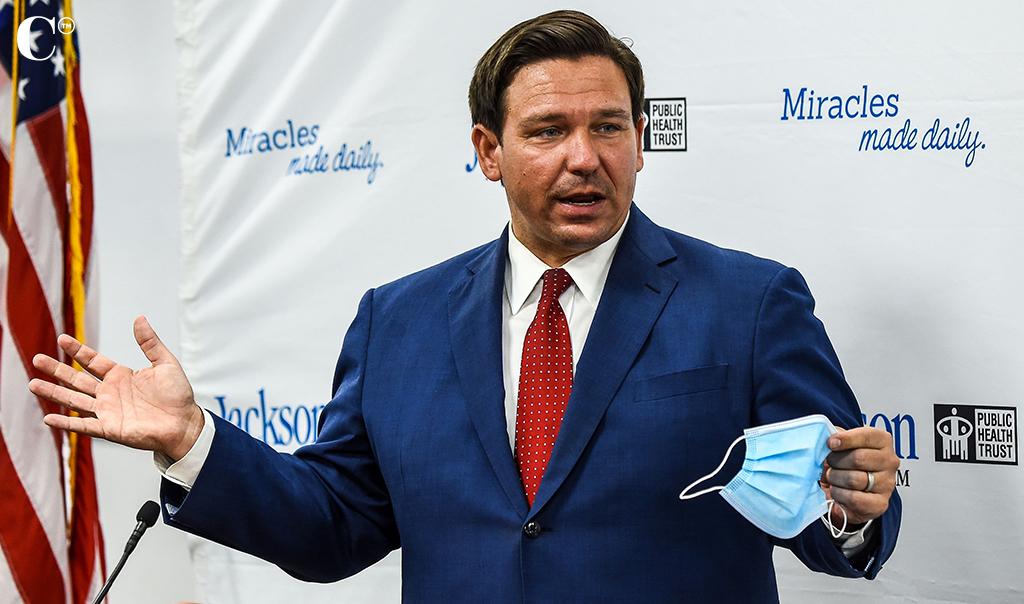 Florida Gov Ron DeSantis and allies are licking their wounds after a Leon County Judge handed them a defeat in court today. Earlier this year, DeSantis issued an Executive Order that expressly banned school districts around the state from enacting mandatory mask requirements for their students. The governor promised financial reprisals would be levied against school boards that defied the order and enacted the mask mandates anyway.

But across the state, the Delta variant has taken hold. 10 school districts, representing just over half of Florida’s 2.8 million students and including DeSantis’ home base of Leon County, defied the order and enacted mask mandates with medical opt-out only, a move that critics say has violated the Parental Bill of Rights. The Parental Bill of Rights was drafted by the Florida legislature earlier this year. Proponents of DeSantis’ order say that the Bill of Rights proves that school boards can’t force children to mask without violating the parents’ right to determine their child’s best interests.

Leon County Judge John C. Cooper disagrees. The court heard 4 days of virtual testimony in a lawsuit that aimed to overturn the Executive Order’s ability to deny school boards the right to enact mask mandates in their districts. In a long and detailed explanation about his ruling, Cooper explained that the Bill of Rights doesn’t allow parents to make dangerous choices. The judge said specifically, “[parents] don’t have the right to harm their child.” According to the judge, plaintiffs met the burden of proof by supplying enough credible evidence from the CDC and other health entities that universal masking saves lives. According to Cooper, preventing school boards from having the choice to enact universal mask mandates in and of itself would cause irreparable harm, and violate the Parental Bill of Rights. Cooper went on to add that school boards have the legal authority to enact narrow mandates that address a specific health or safety need, and that their right to do so supersedes the rights of individual parents because it protects the children from harm.

It was a contentious battle, the stakes of which are as high as they’ve ever been because the county in which the court heard the lawsuit – Leon County in North Florida – just lost an otherwise healthy 3rd grade student to COVID a week prior. In response to the child’s death, Leon County and other districts around the state defied DeSantis and enacted mandatory masking anyway, despite threatening letters from Florida Commissioner of Education Robert Corcoran and DeSantis himself, who promised to withhold funding in punishment.

According to the law that establishes the parents bill of rights in Florida, the state may not infringe on a parents right to determine what’s best for their child, in regards to upbringing, education, health care, and mental health of their child. But the law goes on to add, “without demonstrating that such action is reasonable necessary to achieve a compelling state interest.”

And that was the provision upon which the judge’s ruling focused. Per The Miami Herald (via MSN), “‘My ruling in this case, if you want to put it in one sentence is, I am enforcing the bill passed by the Legislature and requiring that anyone who uses that bill to follow all provisions and no part of the provisions,’ Cooper said, noting defendants used the first half but not the second part of the statute when it issued its order.

Cooper said the Florida Department of Education can enforce the law, but ‘they have to do so in accordance with the terms of the law.’

‘I am not saying yes or no to any particular policy,” Cooper said, noting that school boards can enact health and education policies — such as mask mandates — as long as they ‘demonstrate its reasonableness and the other factors in the law.’”

Lawyers for the parents who filed the lawsuit are happy that the judge has filed an injunction on the blocking action of the Executive Order. This will allow school boards to almost immediately enact mask mandates, the speed of which will be vital considering how much effect Delta is having on the state and schools across the country. Some schools have already gone temporarily remote in response to overwhelming case surges.

School Board Meetings Across the Country Turn Into Chaos 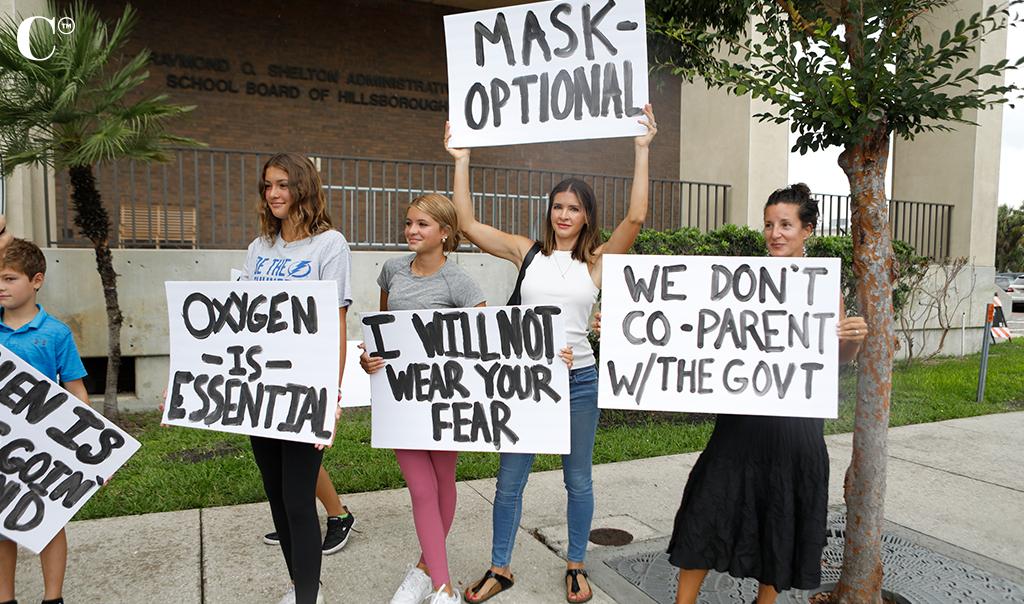 But even if one battle has been won, the masking war wages on. Across the country, school board meetings have turned into vicious battlegrounds. Some parents have resorted to theater; yelling, screaming, and threatening school board leaders with bible verses. Here’s a quick rundown of the chaos that has erupted around the country:

In other board meetings around the country, parents all but beat each over the head with bibles as they clamored for their individual freedoms. Pro-mask parents brought papers from the CDC; anti-mask parents brought local doctors who have co-signed the idea that masks are ineffective. However, despite the fervor of anti-mask sentiment, they remain in the slight minority. And as districts across the country are forced to close in the face of surging COVID numbers, more and more districts are desperately turning to universal masking to avoid the possibility of another lost year.

The chaotic scenes are a stark contrast to the general state of accord that led the start of the 2020-2021 school year. At that point, most parents agreed – sometimes halfheartedly – with temporary masking. A significant portion of the country stated the school year with virtual schooling, so the school board meetings were not the scenes of chaos they are this year. This year, everyone’s frustrations have boiled over and violence and threats have followed. 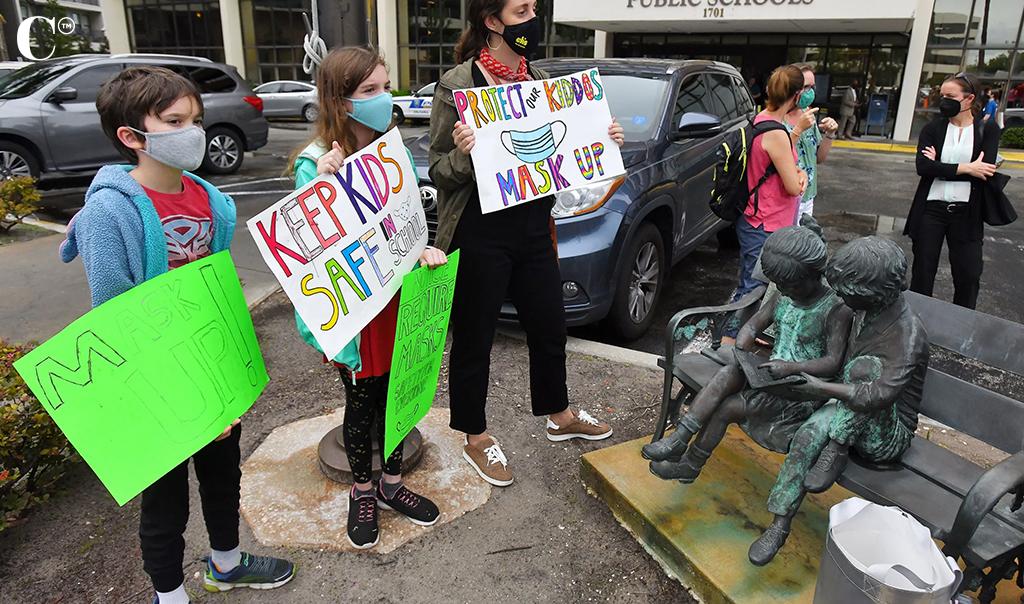 With so much vitriol and disagreement, what happens next? In Florida, DeSantis will surely appeal the judge’s ruling. Forbes reports, “The state is expected to appeal the ruling against them, and there are still multiple other lawsuits pending over the policy that could potentially result in conflicting rulings over the policy’s legality. The decision will clear the way for the 10 Florida school districts that have already imposed strict mask mandates to keep them in place without facing consequences and potentially spur others to follow in their footsteps.”

It’s setting the stage for legal battles across the US, district by district and state by state. In Texas, a court battle offered a different outcome, banning mask mandates in San Antonio.

While parents may be scrapping it out in the dirt about their freedoms versus science, school superintendents and boards are being faced with a horrifying choice: parents’ rights, or childrens’ lives. With Delta soaring, it won’t be long before more districts will be forced to take some action. Whether that’s a move to digital lessons or universal masking, they all face the urgent need to do something.