In the United States, Americans are feeling the crunch in their wallets as they head to the grocery store. Everything 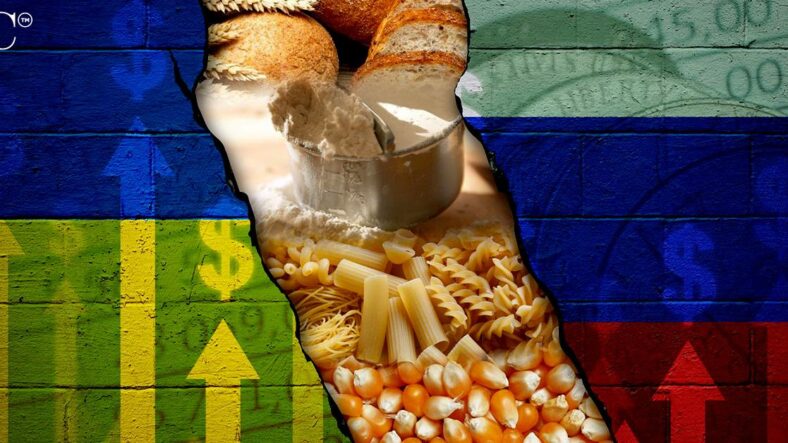 In the United States, Americans are feeling the crunch in their wallets as they head to the grocery store. Everything costs more, from toothpaste and paper towels to milk, meat and snack foods.

While part of that rise in costs is coming from supply shortages due to the pandemic, another crisis is looming thanks to the Russian blockade of Ukraine's major port of export.

Ukraine is a true breadbasket for the world, growing a significant portion of many staple crops around the world, and as their crops languish on ships unable to leave port, the world starts competing for a smaller supply – leading to rising food prices in the US and desperate food shortages around the world.

That's an extraordinary amount of supply to suddenly ground to a halt as the Russian forces have blockaded the major port of Odessa.

ABC News writes, "The Russian threat at sea means there is no safe route for commercial vessels to exit and vast quantities of food exports are stuck in Ukraine's Black Sea ports.

It is becoming 'a disaster' for Ukrainian farmers.

'If the ports don't open soon, we are stuck with the crops,' said Kees Huizinga, who owns a 40,000-acre farm in Kyshchentsi in the Cherkasy region, south of Kyiv."

If Huizinga and others like him can't sell the food currently idling on barges, they won't have the money to plant for the next season either, whatever comes of the Russian invasion. Huizinga predicted that the shortages could stretch through the next decade, painting a bleak picture of a world already weakened by the pandemic.

The Russian invasion force has long coveted capturing the rich port of Odessa but so far has only been able to bottleneck exports and prevent ships from entering or leaving.

It's a concerning development in a world already in crisis, and won't resolve until the port exports start moving again.

ABC adds, "The Russian government recently said it was ready to provide a humanitarian corridor for ships carrying food, in return for the lifting of Western sanctions. It called on Ukraine to de-mine the Black Sea.

However, the U.K. Ministry of Defense accused Russia of 'introducing an alternative narrative' to complicate people's understanding of the original cause of the blockade.

Ukraine has only deployed maritime mines, the U.K.'s Ministry of Defense said, 'because of the continued credible threat of Russian amphibious assaults from the Black Sea.'"

As Western leaders blast Russian leader Vladimir Putin for "weaponizing hunger," celebrities in the United States and around the world are doing all they can to get aid to a country hurting for help.

Even as Russian forces continue dropping bombs and moving closer to their goals of seizing major cities, inch by inch, fundraising in the US is raising millions of dollars to help entrenched civilians and refugees.

Here are the top celebs and their efforts towards helping the Ukrainian people:

While millions of dollars are headed to Ukraine just to keep people from dying, the crisis of death will spread far beyond the embattled country if the food blockade continues. It's a dark chapter in an already dark moment in time; all eyes are on Russia and whether or not they will allow humanitarian passage for both people and food supplies.