No more sweating! That’s probably the worst gym slogan you can imagine, but it’s what South Korean officials want gyms

No more sweating! That’s probably the worst gym slogan you can imagine, but it’s what South Korean officials want gyms across the country to embrace. In the face of a rising new wave of COVID cases, the government has taken the unusual step of banning fast-paced music in workout groups. The plan? Keep people from breaking a sweat and thus breathing too heavily, and the virus won’t spread as quickly. And there’s more.

No Sweat Gains, No Running! 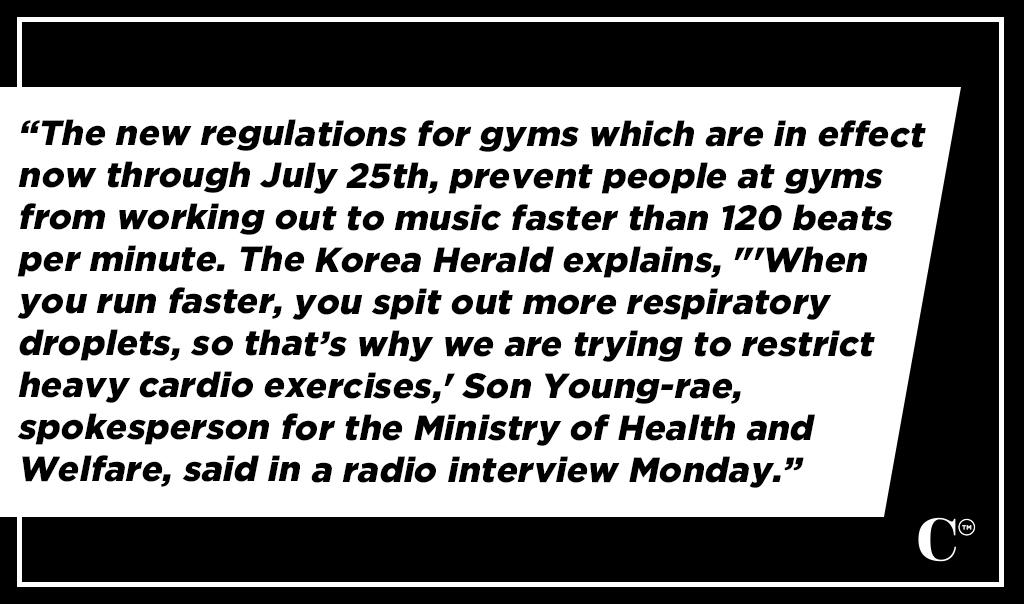 The new regulations for gyms which are in effect now through July 25th, prevent people at gyms from working out to music faster than 120 beats per minute. The Korea Heraldexplains, “‘When you run faster, you spit out more respiratory droplets, so that’s why we are trying to restrict heavy cardio exercises,’ Son Young-rae, spokesperson for the Ministry of Health and Welfare, said in a radio interview Monday.”

Popular songs which are not permitted under this rule include Good4U by Olivia Rodrigo (and of course its sister song Misery Business by Paramore), Gangnam Style by Psy, Blinding Lights by The Weeknd, and Boombayah by Blackpink. CELEB has observed a lot of outlets in the US mentioning that BTS songs would be allowed, but that definitely depends on the song. Boy with Luv and Dynamite might be permissible, but Blood Sweat, & Tears and Permission to Dance are out. Tao Cruz‘s Dynamite, unlike BTS’s, is just a touch too speedy.

Songs allowed include (barely) Just Dance by Lady Gaga, Call Me Maybe by Carly Rae Jepson, Kanye West‘s Stronger, Drake‘s Yes Indeed, and TikTok sensation The Greatest Showman’s ‘This Is Me’ by Keala Settle. The rules seem quite arbitrary and hard to enforce, but people looking to stir some controversy might consider Blurred Lines by Robin Thicke – it clocks in at exactly 120BPM.

Other rules for gyms include that treadmills cannot exceed 3.7MPH, and all gym showers are closed. If you’re looking to avoid catching COVID, you want to avoid breathing other people’s breath expulsion. Obviously, situations where people are breathing harder than usual are going to have higher risk. So, at first glance – maybe the new rule kind of makes sense?

Not so fast. Epidemiologists and health experts are a little baffled by the arbitrary rules. Per the NYT, ‘Dr. Kim Woo-joo, an infectious disease specialist at Korea University Guro Hospital in Seoul, said the gym policies were ‘absurd’ and ‘ineffective.’ ‘I wish people would listen to the experts,’ Dr. Kim said.”

But officials felt like they had to do something, anything, as South Korea faces the onset of its worst wave to date in the pandemic. The numbers in South Korea are bad right now – worse than they were at the peak of 2020. Reuters reports, “The 1,275 cases in the 24 hours to midnight on Wednesday, reported by the Korea Disease Control and Prevention Agency (KDCA), exceeds the number of daily cases reported at the peak of the country’s third wave in December.

Around 80% of the 1,275 locally transmitted cases were recorded in the greater Seoul area, comprising the capital, Gyeonggi Province and Incheon city, KDCA data showed.”

And experts warn that the numbers could double by the end of July. With the rapid increase of cases, South Korea is facing the likelihood that they’ll need to go back under Stage 4 restrictions, where schools are closed, public meetings are restricted to two people after 6PM, other events are banned, nightclubs are closed, and restaurants and cafes have to go under capacity and operating limitations. As the Delta Variant spreads, the highest numbers of infection are occurring in unvaccinated individuals in their 20’s and 30’s, and the country is now racing against time to get vaccination rates higher before things get worse. Officials are watching and waiting to see what’s necessary; in the meantime, the gym rules are a desperate gamble to slow the spread. The quick rise of infections in South Korea may well show the rest of the world what’s ahead in countries where vaccination rates are lagging behind. 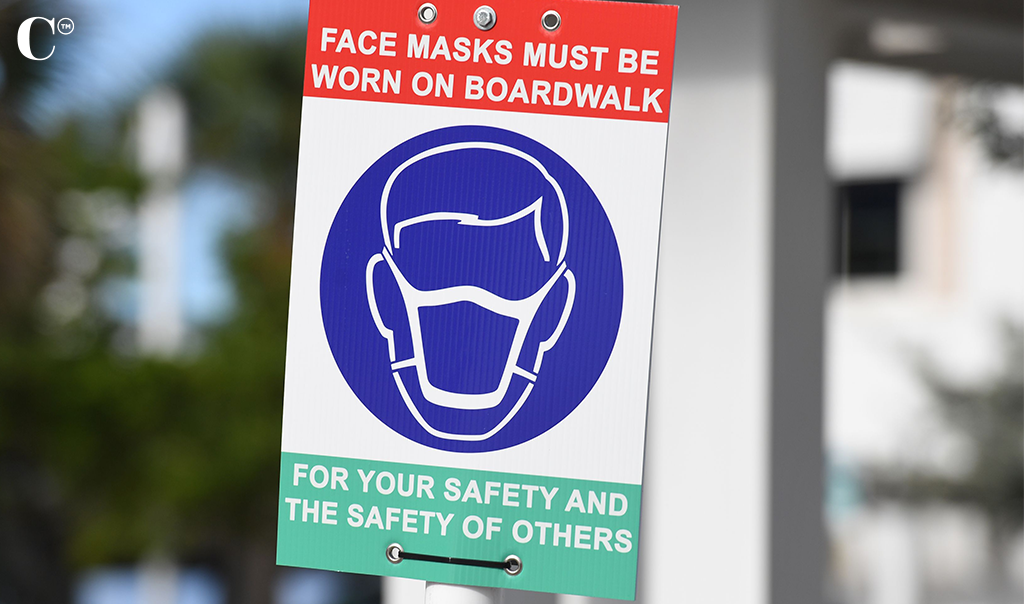 If the gym rule seems weird and arbitrary, it’s certainly not the only bizarre rule to come out of the pandemic. Across the world, experts faced with the unprecedented have tried a variety of restrictions and rules to slow the virus’s spread, to varying degrees of success.

Some of the more noteworthy odd attempts include:

While a sense of humor has been absolutely vital to survive the long months of uncertainty and instability, some of these places definitely weren’t laughing when they made these rules. Although – maybe they can look back now and laugh? South Korea certainly hopes to be able to chuckle over their ban on peppy songs – once they’re out the other side of this wave.