One of Oprah’s favorite things is coming to Taco Bell. No, really! TRUFF, the world’s most influential truffle sauce, is 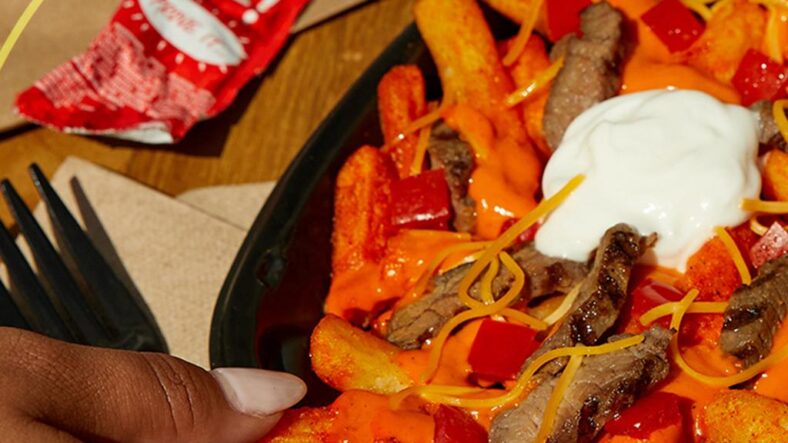 One of Oprah’s favorite things is coming to Taco Bell. No, really! TRUFF, the world’s most influential truffle sauce, is giving Taco Bell a try. The Mexican food-inspired chain is teaming up with the TRUFF brand to offer a new nacho fry experience that will elevate your tastebuds beyond fast food and into gourmet. Sound like a strange combination? Maybe, but it works. 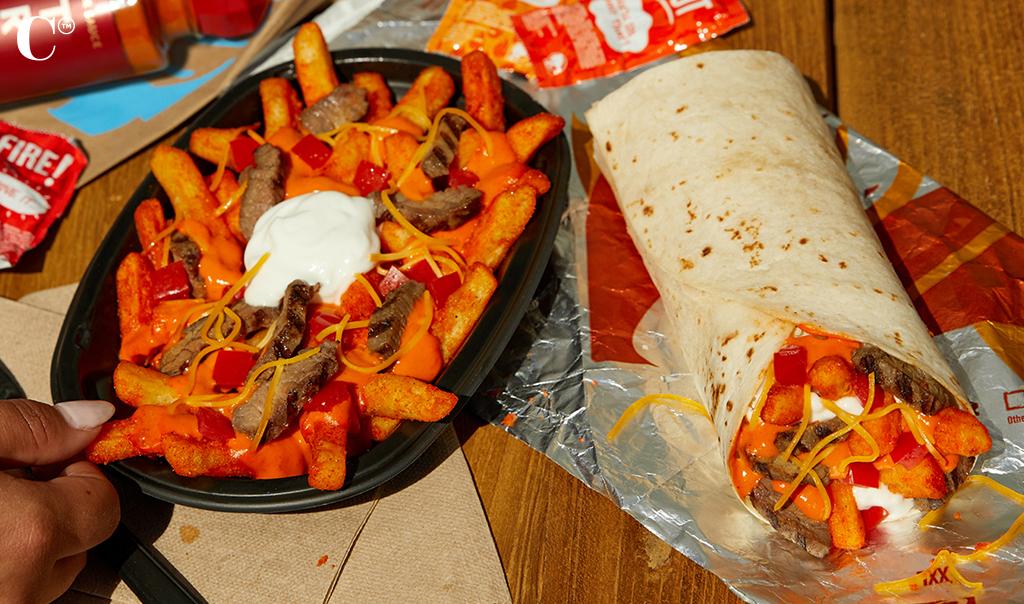 Taco Bell is trying something a little out of the ordinary; outside of the box, if you will. The fast food chain often gets painted with a brush of, “easy, cheap, good” food. But now, they’re teaming up with a truly gourmet brand to offer two new menu items: Loaded TRUFF Nacho Fries, and TRUFF Fries Burritos.

The TRUFF inclusion is a delectable hot sauce, infused with truffle-oil. And since nacho fries are making their seventh debut at the chain, this is the perfect time to kick them up a notch with the gourmet addition. Here’s a quick rundown of the two new menu items:

Taco Bell is excited about the new items, and a press release shares, “‘We’re always looking for ways to serve up new innovations to our fans, and this partnership with TRUFF takes our beloved Nacho Fries to a new level,’ said Rene Pisciotti, Executive Chef at Taco Bell Corp. ‘TRUFF is rapidly growing and becoming the go-to, luxury hot sauce line, so it makes total sense for us to join forces and bring the world new spicy creations.’”

And we couldn’t agree more: it’s the perfect combo. But there’s a caveat: if your tastebuds are watering at the mere thought of this menu addition, you may need to travel to try it. The new TRUFF items are only available at one location (for now): 404 Jamboree Rd, Newport Beach, CA 92660. But if these do well at this location, who knows? A positive test market result may expand the items nation-wide, and that’s something we can all get behind.

TRUFF: The World’s Most Influential Sauce, Beloved by Celebrities 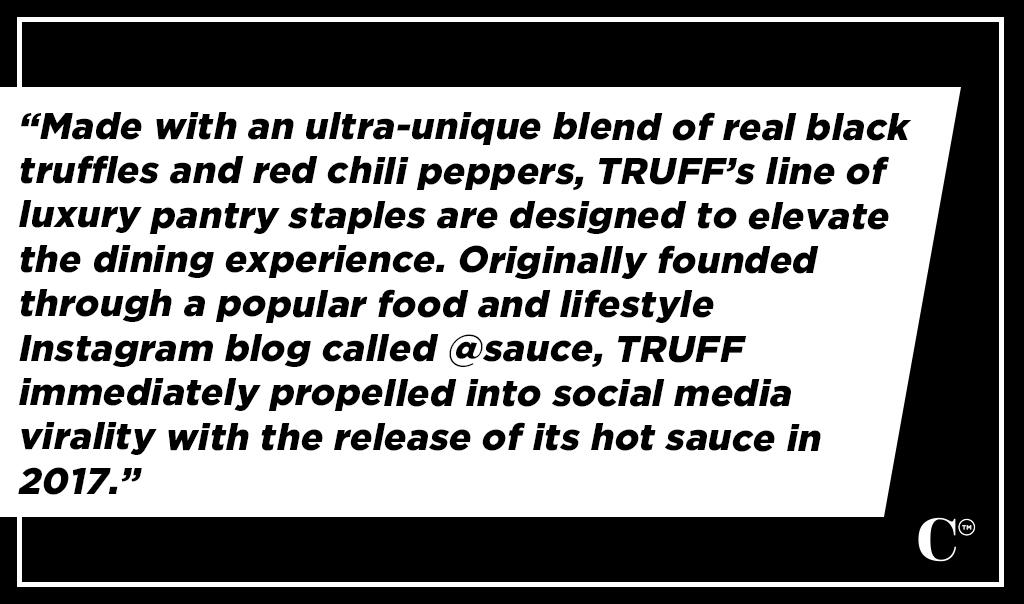 But maybe we haven’t spent enough time hyping up this sauce, if you’re still hesitant to go try it (please try it, for the rest of our sakes). If you don’t know what TRUFF is, you may be asking yourself what the big deal is. Well, the big deal is a big deal. Truffles have long been considered one of the most delectable delicacies in the world. Long reserved for only the rich, they’re now available to basically everyone. TRUFF has taken this sought-after food and turned it into a brilliantly blended hot sauce, truffle-infused mayo and other sauces.

The TRUFF team describes the brand as, “Made with an ultra-unique blend of real black truffles and red chili peppers, TRUFF’s line of luxury pantry staples are designed to elevate the dining experience. Originally founded through a popular food and lifestyle Instagram blog called @sauce, TRUFF immediately propelled into social media virality with the release of its hot sauce in 2017. The brand quickly became the fastest growing company in the hot sauce space due to its distinctive flavor profile, pristine bottle, Truffle Inspired cap, and of course the coveted Instagram account @sauce that makes tagging a no-brainer. Taking inspiration from the flagship black truffle experience, TRUFF recently expanded its family of products to include other popular favorites like TRUFF Pasta Sauce, TRUFF Mayonnaise and TRUFF Truffle Oil.

TRUFF has been featured on the TODAY Show, Good Morning America, Food Network, The Rachael Ray Show, Food & Wine and on Oprah’s ‘Favorite Things’ list two years in a row. TRUFF is also the #1 best- selling hot sauce on Amazon and at Whole Foods Market. You can find TRUFF’s variety of sauces in stores nationwide and around the world in the UK, Australia, Kuwait and South Korea.”

That’s a lot of international face-time for a little sauce, right? That’s because it’s not just a little sauce. TRUFF’s brand has been carefully crafted from the ground up, from taste and non-GMO ingredients to marketing and social media presence, making it the most influential sauce in the world.

And aside from Oprah, a number of other celebrities have declared their love for all things TRUFF, including: Ben Baller, Storm Reid, Josh Peck, Rubi Rose, DJ Politik, Karrueche, Jason DeRulo, Lil Jon and Steve Aoki.

TRUFF is as excited as Taco Bell about the team-up, saying in a press release: “‘We are constantly inspired by Taco Bell’s ability to evolve with pop culture and create conversation-generating experiences, which is why the brand immediately stood out as the perfect partner for our first-ever QSR offering,’ says Nick Guillen, Co-Founder and Co-CEO at TRUFF. ‘Together, we’ve created an unexpected mashup of TRUFF and Taco Bell sauces that is distinctively delicious. We are excited to share this game-changing sauce and elevate the conventions of fast-food.’” 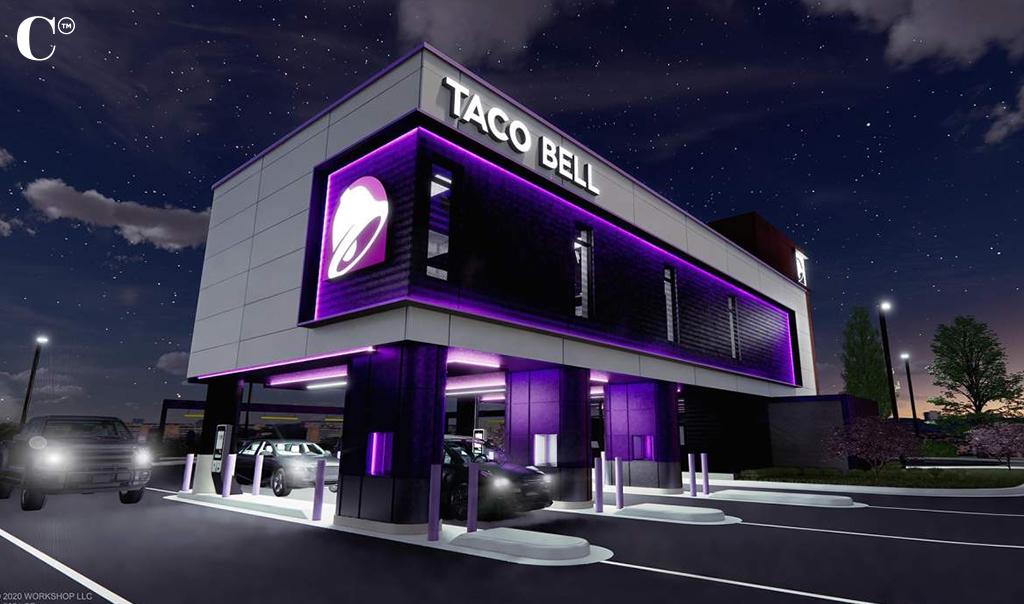 But TRUFF isn’t going into this partnership alone and Taco Bell has some big news up its own sleeve as well. The fast food chain is breaking ground on a new innovative concept design later this month, in Minnesota. HypeBeast writes, “Dubbed ‘Taco Bell Defy,’ the 3,000 square-foot restaurant concept located in Brooklyn Park, Minnesota, utilizes a two-story model for ‘the frictionless future of Taco Bell.’ The concept designed for digital consumers combines technology and unique design elements, to disrupt conventions and maximize ease.”

This new concept is centered around drive-thru, with multiple lanes dedicated to speed up the process and most interactions done digitally. It’s a perfect solution to meet the needs of today’s touch-averse society, which is moving away from face-to-face and dine-in interactions. The pandemic has certainly accelerated that shift, and the new Defy will be a timely addition to the Taco Bell family. If it works well in Minnesota, it may expand the concept to other Taco Bell locations around the country and world.

For now though, it’s enough to know that TRUFF is coming to Taco Bell. If you’re close enough to the California location to give it a try, do; it may be gone forever, soon. But we sincerely hope that Californians order enough and ask for more so that maybe the rest of us can try it too. After all, TRUFF and Taco Bell is too good of a pairing to pass up.