‘The Theater’ is Back at Virgin Hotels LV with a Lineup Including Lady A, MGK and More

Virgin Hotels in Las Vegas celebrated its grand opening this week, and it was everything promised plus more. The weekend 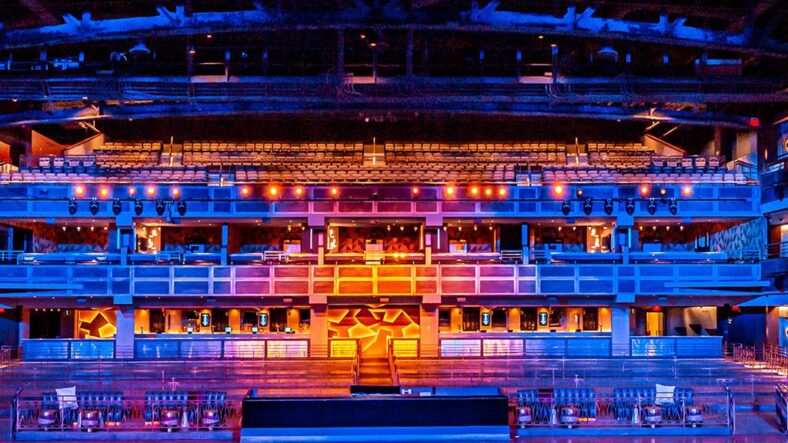 Virgin Hotels in Las Vegas celebrated its grand opening this week, and it was everything promised plus more. The weekend was headlined by Virgin Group owner and billionaire entrepreneur Sir Richard Branson and the entire Virgin Hotels LV team. Elia Beach Club opened as well, proving that once again Virgin Hotels has created a hit.

Now, Virgin and partner AEG are refusing to relinquish the microphone, announcing the lineup for the newly renovated Theater at Virgin Hotels once the unique and highly-sought Joint at the Hard Rock Hotel & Casino. The starting lineup for Theater is chock-full of talent and star power.

History of the Theater 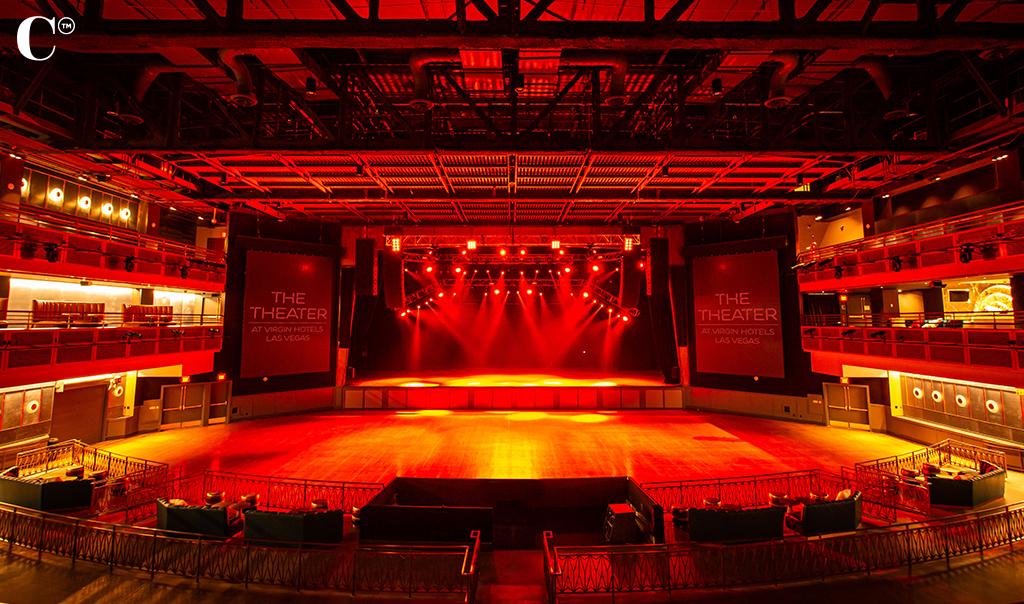 Virgin Hotels’ Theater was once known as The Joint, when the hotel was still the Hard Rock Hotel & Casino. The Joint was, in its own right and time, a top-tier venue that attracted some of the best entertainers around.

The original Joint opened with the Hard Rock in 1995. When it debuted, The Joint could hold 1,400 attendees, the first concert included multiple artists and was broadcast on MTV, introducing the new venue in a big way. The Joint’s intimate size and outsize stage allowed guests to get up close and personal with their favorite artists. The success of The Joint and its unique feel inspired other similar venues to open elsewhere in Vegas.

Although it was designed as a music venue, the Joint held other events including film screenings and a unique variety show held by Jeff Beacher, of Beacher’s Madhouse fame. Also displayed at the Joint was, “Imagine: The Artwork of John Lennon,” which included 100 of his most iconic pieces.

In the beginning of 2009, the original Joint was shut down amid plans to rebuild it bigger and better. Although The Joint was beloved by performers and guests alike, it battled practical issues that included less-than-ideal sound distribution and challenges from the unique, rectangle shape of the interior. Across the property, the new Joint rose in a similarly shaped building, but with capacity seating in this one for 4,000. The new Joint opened in mid-2009 with a concert for the popular band The Killers. Although this Joint was poised to compete with its industry rivals including The House of Blues, its success borrowed directly from the smaller original venue, and the spirit of the OG Joint lived on.

The new Joint was purchased along with the rest of the Hard Rock in 2018 by Virgin Hotels, with a plan to renovate and rebrand the entire property. The Joint was renamed the Theater, but it was breathing life into an already beautiful creation; the venue remains to this day a testament to the best of modern Vegas. AEG took over booking for the original Joint in 2006, and continue the tradition announcing their 2021 lineup to the tune of much applause and anticipation. 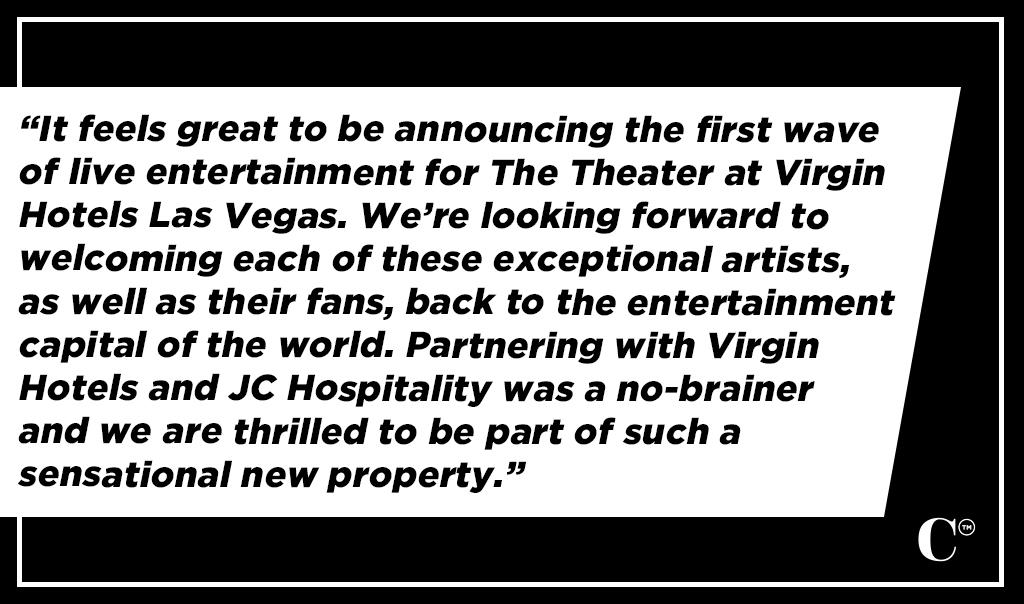 So when AEG announced their 2021 lineup, it was on the heels of decades of successes. “It feels great to be announcing the first wave of live entertainment for The Theater at Virgin Hotels Las Vegas. We’re looking forward to welcoming each of these exceptional artists, as well as their fans, back to the entertainment capital of the world. Partnering with Virgin Hotels and JC Hospitality was a no-brainer and we are thrilled to be part of such a sensational new property,” said AEG Presents Las Vegas Senior Vice President, Bobby Reynolds, of the announcement for the exciting new lineup.

The brilliant starting lineup for the shiny new Theater includes: 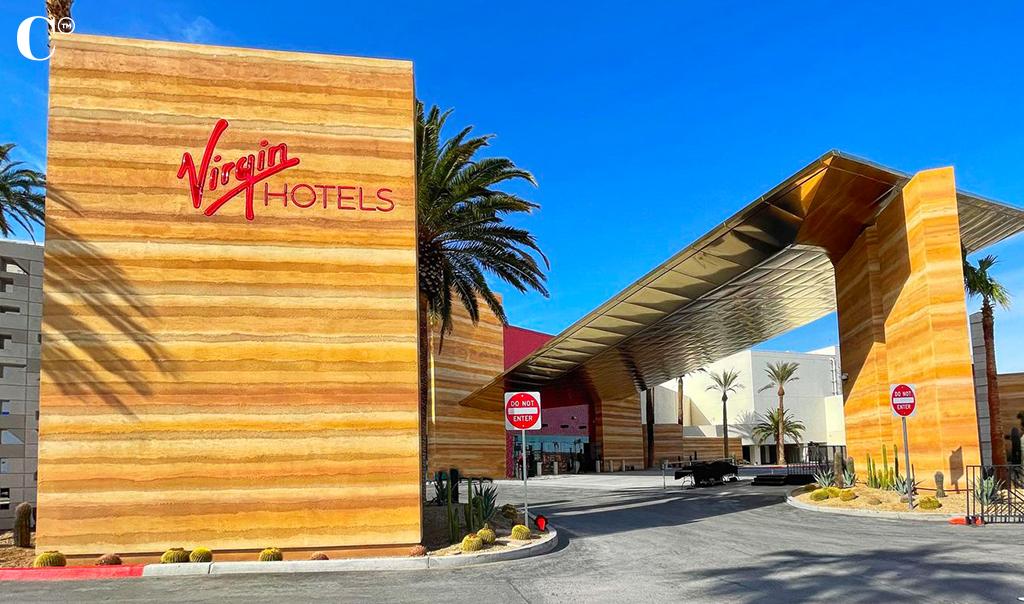 This announcement comes after Virgin Hotels’ absolutely stellar Grand Opening weekend. Elia Beach Club opened this weekend as well, all to the soundtrack of jubilation.

Christina Aguilera and Flo Rida took the stage last Thursday to ring in the weekend, and Richard Branson was seen around the hotel surprising guests. Nevada Governor Steve Sisolak was there to celebrate the place of these big building projects in helping recover the Vegas economy from the COVID slow-down, and you could tell from watching the Virgin and Elia teams that they were bursting at the seams with pride for what they’ve brought to life in the desert sands. Although the Hard Rock will always be recognizable, Virgin Hotels, Elia, and the Theater are new life for the Las Vegas legend.