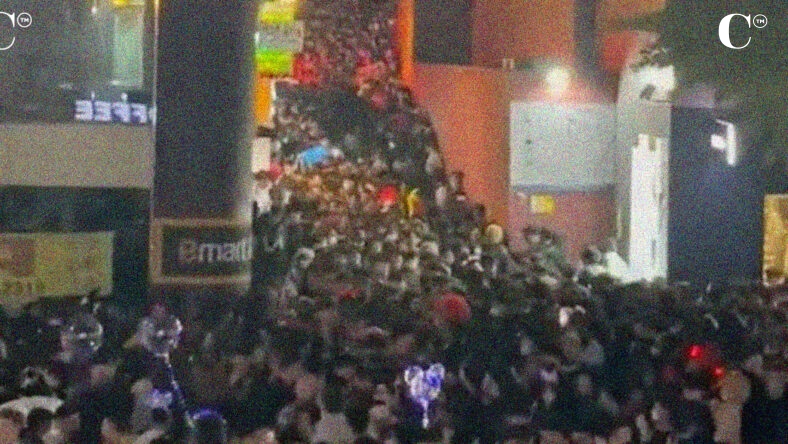 An Australian TikToker has opened up about his first-hand experience in the South Korean crowd crush which left over 150 people dead.

The night of horror came amid a weekend of Halloween festivities in South Korea capital Seoul’s Itaewon district.

And now many who were in the crowd want the government to admit their responsibility for the deaths.

The streets of Itaewon are narrow and steep.

They’re an entertainment and nighttime fun haven, once known for offering cheap beer, knockoff goods, and reasonably priced company for the evening.

It once neighbored a large US military base, making it a booming little district in South Korea’s capital city of Seoul.

By the time the US military withdrew from the base in 2019, Itaewon had developed a reputation for being an open and diverse neighborhood, now known for its classy bars, restaurants, cafes and shops.

It’s almost a picture-perfect place to celebrate a holiday, and nearly 100,000 people are estimated to have been in the district on Saturday to enjoy upcoming Halloween.

The Washington Post looked back at the event, consulting experts to determine how exactly a high density crowd turned to tragedy.

A livestream around 7:41PM showed heavy crowds, but nothing dangerous – yet.

Washington Post writes, “Another live stream broadcast at 9:21 p.m. — about an hour before the first calls to authorities — shows what Keith Still, a crowd safety expert and visiting professor of crowd science at the University of Suffolk in England, called ‘high density’ crowds that are still able to move at the intersection. But there are signs of trouble.

‘You can see the static crowd ahead and people moving towards that area, that’s indicative of a potential problem,’ said Still.

And despite the building danger, ‘there is no crowd management in place whatsoever,’ said Steve Allen, founder of Crowd Safety, who reviewed the videos. ‘Was a crush inevitable as numbers grew? Definitely.’”

Around 10:08PM another video shows what’s known as “crowd collapse” in the alleyway where the crush happened, but those heading in that direction are unaware of what they’re walking into and contributing to.

The first call for help came at around 10:15PM, with first responders arriving quickly to the scene.

However, witnesses in some areas say they were unable to receive aid for as much as an hour after the emergency first started.

Videos of the aftermath showed rows of bodies laid on the ground, covered in sheets, and dozens of people receiving chest compressions from strangers desperate to save a life.

TikToker (and Others) Blames South Korea Stampede on Government

i filmed the last video after being out after the incident, sleeping for 2 hours at my friends house nearby and then preceding to look for my dead and hospitalised friends so i apologise that it did not get the correct message across- i hope to be able to move on from this situation after myself and the families have finished grieving

Seoul police have since taken responsibility for the horrific crush, which ended in 156 dead and over 130 additional people injured.

Per CBS News, “South Korea’s police commissioner general was among a number of officials who apologized for the deadly Halloween stampede that left at least 156 people dead and 151 more injured over the weekend. Yoon Hee-keun said on Tuesday that the police response to the disaster was ‘inadequate.’

‘I feel a heavy responsibility, as the head of one of the related government offices,’ Yoon said in a televised news conference.

Yoon said the National Police Agency was looking into how officers on the ground handled the crowd surge, and into the fact that emergency services received a number of calls alerting them to the seriousness of the crush as the situation deteriorated. Yoon said the police response to those calls was ‘insufficient.'”

But many who were on the ground during the stampede say the police did what they could and are not to blame.

TikToker Nathan Taverniti, an Australian who was there to celebrate with three friends, is now acting as guardian for the body of a 23-year-old friend who was killed that night. Two of their other friends were seriously injured.

Taverniti took to TikTok with a since-deleted video to explain how it was not a stampede but rather a “slow, agonizing crush.”

The young Australian said, “I was there when she said she couldn’t breathe and I grabbed one of my friend’s hands. There was no stampede, it was a slow and agonizing crush.”

He recounts being able to see his friend, but being unable to save her. After the crowd had been dispersed, he was only able to find his friend’s body through the help of an ABC America crew, because Taverniti claims no officials would help.

DailyMail reports, “Mr Taverniti blamed the lack of planning and police preparedness for the disaster.

‘I watched as people filmed and sang and laughed while my friends were dying among with many other people,’ he said.

‘I was there trying to pull people out because there was not enough police officers and nobody was doing anything to make the crowd stop.

‘We were yelling, saying ‘you have to turn around, you have to go back, people are dying’ but nobody was listening.

Sydney woman Julia Cho was one of Taverniti’s friend group, and the two of them condemned the government’s preparedness which they claim led to the tragedy. Cho said of the evening’s horrors; “Local authorities were not on standby and left innocent people helpless, despite knowing there was an excessive amount of people in the streets with nowhere to go. This happened very early in the night. People were suffocating, toppling over one another and crushed.”

Cho added, “The leaders and authorities hold sole responsibility and have failed their people.”

South Korea’s President Yoon Suk-yeol said Sunday morning that the deadly stampede “should not have happened.”

Although Taverniti removed his original video, he posted again to clarify that he did not feel his first video conveyed what he wanted to.

“I am not here asking for sympathy, or your best wishes, although I appreciate it. I am here to convey the gravity of the situation and how easily it was preventable.”

Taverniti later says that the deaths were not caused by drunk people or excessive pushing like what people are saying on the internet. “The government knew 100 percent that this event was taking place and did not have the proper precautions in place in case something happened.”

According to Taverniti, there were no backup emergency services nearby. And cell service was spotty for those in the crowd he blasts, because crowd control involves ensuring there are enough towers to allow people on the ground to communicate in case of an emergency.

And in his newest video, Taverniti says that the government is trying not to take responsibility for their failures. The TikToker shows screenshots from articles discussing the pre-planning for the event which he claims shows “clear government negligence” even as the South Korean government sidesteps accountability.