This weekend, Las Vegas is going all in, celebrating the “Unstoppable” Grand Opening weekend of Virgin Hotels. After its soft

This weekend, Las Vegas is going all in, celebrating the “Unstoppable” Grand Opening weekend of Virgin Hotels. After its soft opening is March, Virgin Hotels Las Vegas, owned by JC Hospitality is no longer shying away from the spotlight; now they’ve seized the eyes of the world to show that the casino-resort is ready and open for business. Hosted by Sir Richard Branson, Virgin Group founder, the Unstoppable weekend extravaganza included concerts, parties and all the flash and pizazz of the best Vegas openings. 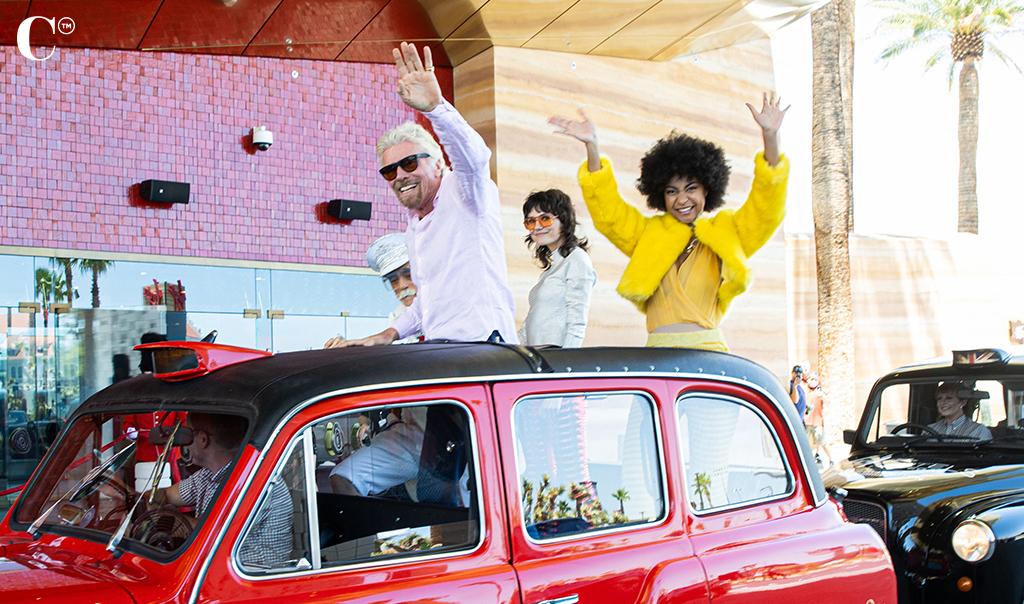 The weekend started off with Branson first rolling up to the events in a parade of British cabs, classic and sleek, and then he met up with his JC Hospitality and Virgin Hotels Las Vegas team members. Then, at a press conference at Élia Beach Club with the hotel’s big wigs, it was just as unique as you’d expect a Virgin Hotels presser to be. The team was pumped; you could tell they were feeling the euphoria of a job well done and years of work to be standing on the stage celebrating the grand opening.

Bosworth thanked Danilovic, explaining, “Mio has been part of the ownership team and the launch team going back to 2017-2018. He is a worldwide operator of nightlife and daylife, Mio thank you so much.” Bosworth continues, “Mike, one of our leaders, is really helping drive the success of Élia Beach Club and, you know, Jroc is going to take over the stage shortly. … What he’s going to be working on is one of the core values that Jroc and Michael are bringing to Élia Beach Club as related to health and wellness.”

Jroc demonstrated for all the collective Élia Beach Club greeting, which is a show of gratitude and connectedness that emanates from the core. Then, Damon Damato, breath visionary, led the audience in a guided breathing exercise, emphasizing the priorities of health and wellness that lie at the heart of the Élia team and philosophy.

Bosworth paused for a moment to acknowledge the cosmic forces at work making this the perfect weekend for Élia and the hotel’s big opening; “This wasn’t planned, but it’s June 10 and it’s a new moon, and a new moon is about new beginnings. And not only is this a new moon, but we’re basically at the end of the eclipse portal, so there’s just a lot of positive energy we’re going to be pulling from.” 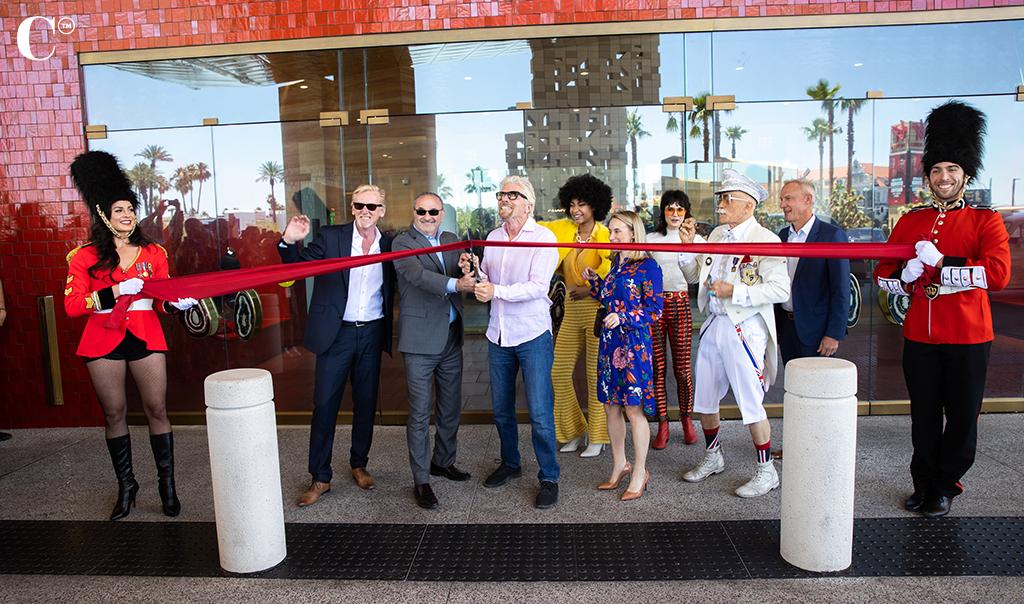 Then, it was time for the man of the hour, SRB, to take the stage and start the party. “Because of COVID, we’ve been locked away while all the hard work was going on,” he says. “We just couldn’t wish for anything better. I remember as a young man coming to the Hard Rock, it was fun, a long time ago. It went downhill somewhat. Now, the life has been breathed back into it. The team has created so many magical moments.” Branson then turned to the DJ deck and hit the first notes of The Rolling Stones “Start Me Up,” a nod to his years in the record business.

From there, the group dispersed and went to a second press conference inside Élia’s Living Room space where Branson was joined by Nevada Governor Steve Sisolak. The state leader took a moment to address the audience, he affirmed the state’s commitment to continuing these massive hospitality and entertainment projects amid the COVID pandemic; “These projects are essential to the future of our economy, to the ability of us to re-emerge from this virus stronger, and better than we were before. And this property has just been reinvented, and I’m just so excited to be here today …” recalling the fact that the Virgin Hotels is built amongst the bones of what was the Hard Rock Casino-Hotel, which Branson dreamed of reinventing.

After the Governor’s remarks, Branson popped some bubbles and spayed the crowd with Champagne. Speaking with journalists, Branson added what he wants people to take away from their time at Virgin. “We only live once.” Branson chuckled and continued, “We’re going to have some fun. We want to relax. We’ll have a blast.” Mentioning the lovely restaurants and all the wonderful things Virgin Hotels Las Vegas has to offer, Branson promised a place to escape the cares of the world for awhile.

When asked how he was feeling about Vegas, Branson replied, “It’s just so nice to see the streets full of people.” Branson added that he’s been vaccinated, and encouraged others to get their vaccines as well. “Anybody who’s not been vaccinated, get vaccinated.” The billionaire entrepreneur continued, “We’ve got to get every single person in the world vaccinated as quickly as possible.” 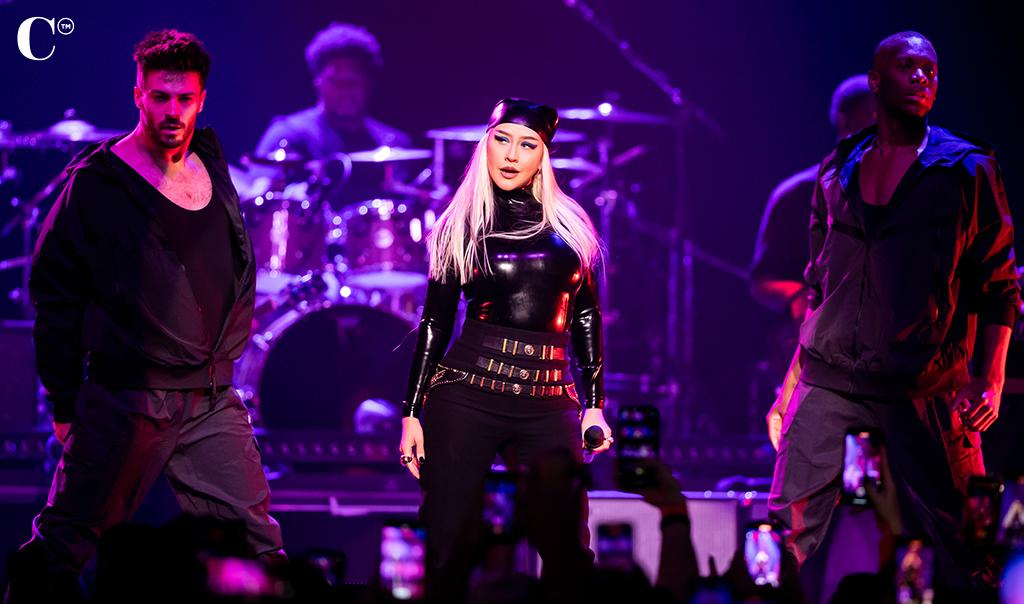 The Virgin Hotels and Élia teams weren’t the only ones rocking the stage though, pop superstar Christina Aguilera and hip-hop/rapper Flo Rida later that night turned out a thunderous performance in the Theater, along with DJ Mix Master Mike.

Aguilera dominated the stage with her signature diva performance, her voice and stage presence far outpacing her 5’2″ stature. Flo Rida comfortably commanded the audience. The Florida-born rapper has been consistently topping charts since 2007, and his performance proved that he’s still a leader of the party jam.

Branson appeared on stage as well with Flo Rida, and Mark Shunock hosted the electric night. Aguilera performed some of her best hits, including, “Fighter,” “Lady Marmalade,” and, “Ain’t No Other Man.” Flo Rida recalled his greatest hits with, “Low,” “My House,” and “Wild Ones.” 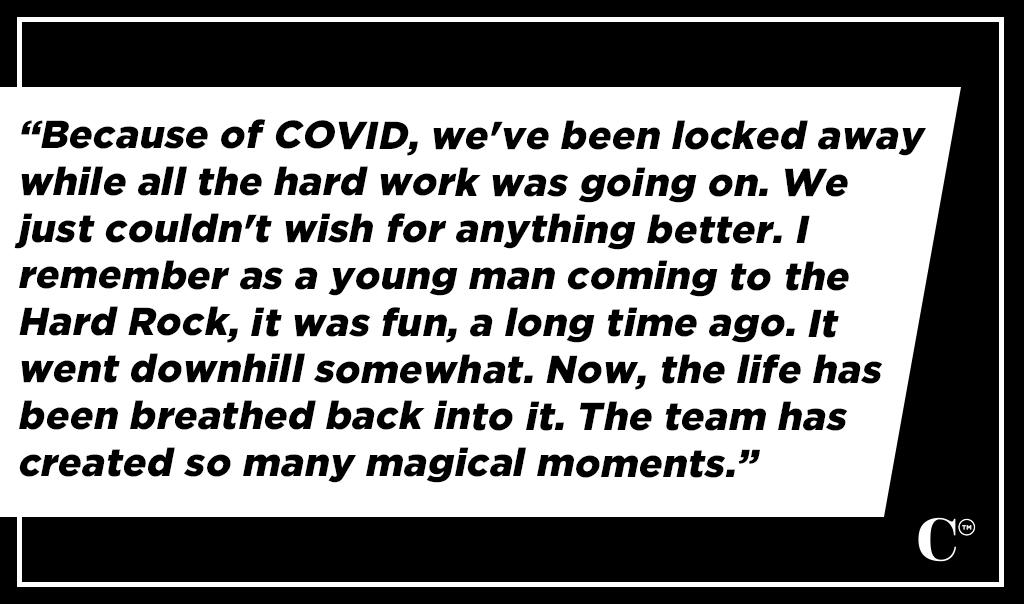 It wouldn’t be a Virgin Hotels opening if Branson wasn’t thoroughly enjoying the happiness of people. On Friday, he brought journalists along with him on a walk about the hotel, surprising people as he gave out prizes such as dining gift certificates and hotel rooms. He was dressed in a red coat with tails like a circus ringmaster.

Virgin Hotels is Something Spectacular Among Vegas Properties 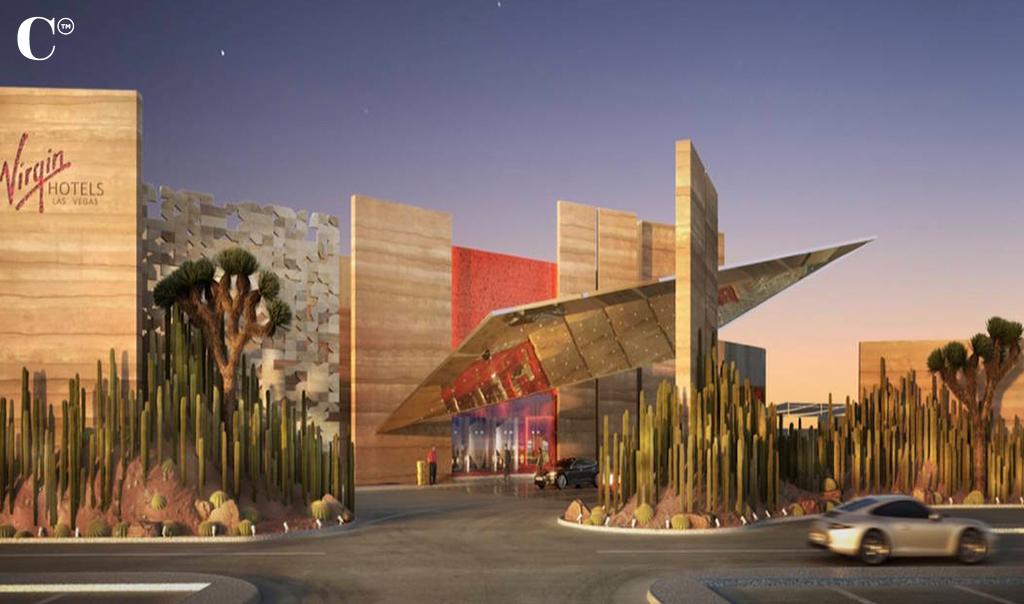 Just by watching the team talk about their passion for Virgin Hotels Las Vegas and everything they’ve accomplished, it’s easy to tell what a labor of love it has been to revive the former Hard Rock Hotel & Casino as something new. And you can see the love in the little touches around the hotel; with whimsical cactuses placed playfully around the property, a lobby that gleams with all the polish of Vegas’ finest hotels and rooms that are an oasis of relaxation.

CELEB visited Virgin Hotels Las Vegas during its soft open in March, and the wonders truly never ceased from the moment you set foot on the property. At the soft opening, CELEB shared a first impression of the rooms; “The King Chamber showcases many of those cool touches for which the Virgin Hotels brand is known. There is a striking orange velvet corner sofa in this room type, as well as a vanity table with selfie-perfect lighting. Plus, outlets and USB ports can be found everywhere, even in the base of the sofa. The custom-designed hybrid bed features a built-in corner chair back that is perfect for lap-topping in bed. The hallway, closet and bathroom are separated into a dressing room space with a privacy door that keep the sleeping quarters quiet and secluded.”

The casino is expansive and elegant, inviting guests to come in and feel carefree for a few hours. If you’re looking for fine dining, Virgin guests can choose from Casa Calavera, Kris Yenbamroong’s Night + Market from Los Angeles Nobu and One Steakhouse from Michael and David Morton. The Kitchen and Bar at the Commons Club offer other options for guests looking for a little variety.

When you’re ready to kick off your shoes and get some sun, Élia’s Beach Club is now open for business—and it’s stunning.

In short, Virgin Hotels’ theme for opening weekend—Unstoppable—is aptly chosen. The hotel has all the class of a Virgin Hotels property, blended with the character and euphoric joy that Vegas embraces.

To plan your Virgin Hotels Las Vegas stay, visit their website and get ready to enjoy something new and incredible.