Four Films in ‘What to Watch This Week’ – A Ticket to Inisherin with Black Adam, Raymond & Ray

Do the streets seem less crowded to you this weekend? If so, chances are that most of the missing are 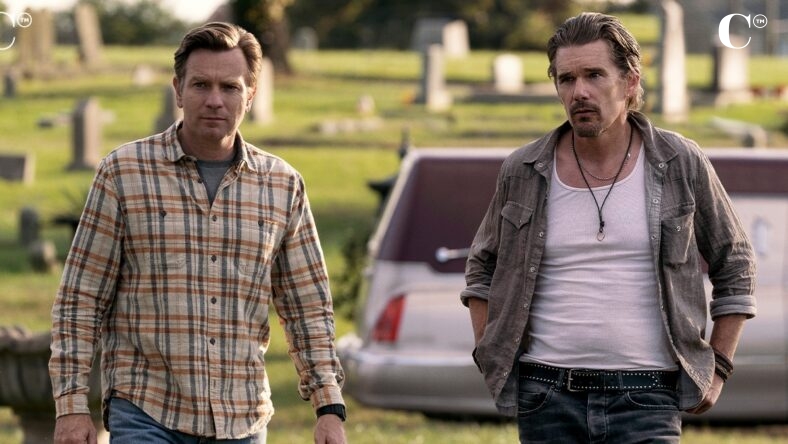 Do the streets seem less crowded to you this weekend? If so, chances are that most of the missing are at the movies. To say there are some fantastic films in theaters is to say that Starbucks has a few options for customizing your coffee. To help you decide what to spend your hard earned cash on, here are four films in our ‘What to Watch This Week’ franchise.

A Ticket to Paradise

If you can name an acting pair that is cooler and more needed right now than Julia Roberts and George Clooney, then you can rip away my Milk Duds and replace them with black jelly beans, yuk.

The aforementioned perfect pair are hitting the big screen in Ticket to Paradise. The duo play divorced couple David and Georgia, and they are far from friends. While the exes would rather strip naked, roll around in glass and swim in saltwater then see one another, they find themselves teaming up for a common cause.

The cause is the potential new son-in-law. You see, David and Georgia’s only daughter, Lily (Kaitlyn Dever)  has taken to a local island boy while she is on vacation after graduating law school. Seems Lily fell in love and rather than return to the states to start a very lucrative life of law, she is opting instead to marry a young man she just met.

That simply will not do for David and Georgia. The two quickly find themselves in one of the most romantic islands on the globe with the sole purpose of stopping their daughter from throwing her life away.

You don’t really need a degree in film to know what happens next folks. Ticket to Paradise is charming. It is just the bouncy and light movie that we need right now. It’s been a long time since we’ve seen a good ‘ol fashioned movie star do what good ‘ol fashioned movie stars do. They dazzle, they put a little pep in your step, heck, they make ya feel good about being alive. And who couldn’t use a little (or a lot) of that? The cadence of Clooney’s and Roberts’s chemistry is undeniable on screen. Yes, you know exactly what will happen, but gosh darn it if Clooney and Roberts don’t make the journey there downright delightful.

Simply put, Clooney and Roberts are a guaranteed ticket to a charmingly good time at the movies.

The Banshees of Inisherin

Colin Farrell and Brendan Gleeson are Pádraic and Colm, two life-long bff’s in a small cliff town in the early 1920’s. One day, without warning Colm abruptly ends their friendship. He gives his friend the finger and promptly exits this life. No obvious reason, he just cut off his friend, quick as a flick of a switch.

A stunned Pádraic is just bathing in bewilderment. After repeated attempts by Pádraic to make nice, Colm ups the ante and disturbing consequences are soon felt.

The Banshees of Inisherin is magnificent, period. No log-line or trailer can possibly portray how outstanding this work is. The film is quiet and simple, yet packed with complex, boisterous emotions. It’s just a simple story of two best friends.  The movie is just stunningly beautiful to look at, it’s cinematography is still and gorgeous. The writing is witty and light at times, while at times delivering considerable and heavily pointed speeches. All of it is made beautiful by the performance of Colin Farrell and Brenden Gleeson.

The Banshees of Inisherin is depressing and full of despair. But it’s also humorous. In other words, it will punch you in the stomach while simultaneously filling your heart with joy.

Don’t be shocked if this role didn’t get Farrell some award recognition, it is certainly well deserved.

Let’s not waste one another’s time and pretend that you haven’t heard about The Rock’s latest passion project Black Adam. It feels like that’s all we’ve heard about since it’s first teaser at Cinemacon this year. For the sake of keeping things simple (and to my word count up) allow me a brief, super simple statement on a description.

Black Adam is awakened and cranky.

Black Adam takes weird justice out on us not-so-superhero people.

Turns out the statement was neither brief nor simple and that is exactly how Black Adam is. Now, before you go all ‘Black Adam’ on me, let me first say that I don’t actually see an issue with this. If you’ve worked all week with mandatory overtime and spent your money on a Black Adam movie ticket, chances are you kinda know what you’re buying. Black Adam isn’t exactly a think-piece of a movie. Dwayne Johnson isn’t exactly a dramatic actor (and no, his wrestling days – while lovely – do not count). And that is not only okay with you, it’s preferred by you!

Black Adam (yelling voice here) IS A COMIC BOOK MOVIE! It’s a ‘grab your cape, put your super power on flex, utter your catchphrase, after-credit-scene type of comic book movie. There are more super heroes with obscure powers than a fan could want. There are good guys, and bad guys. There is a story so completely confusing that it would take an intelligent intergalactic extraterrestrial life species to help solve it. There are epic special effects. It is a comic book movie. Now, if you thought you were getting otherwise, well, that’s on you.

Should you want to stay in and stream this weekend, do it. If this is your game plan, then I’ve got a gem for ya. Raymond & Ray is the story of  half-brothers…(wait for it) Raymond (Ewan McGregor) and Ray (Ethan Hawke). The two brothers reunite after learning of their estranged father’s death. Though the brothers are distant both physically and emotionally, they come together to put their father to rest.

The closer they get to their father’s funeral, the more the brothers are met with one surprising situation after another. It turns out that dear old dad was both the bastard they remembered growing up (what parent gives their kids the same name?) and a surprisingly decent stranger. As both brothers uncover another layer of their past with their papa, they are met with their own demons. At its core, Raymond & Ray is the witnessing of the rebirth of two men who would not have otherwise been allowed to evolve until the death of their father.

Raymond & Ray is a genuinely good movie. Both McGregor and Hawke deliver strong, solid performances in the movie. It’s an emotionally dense movie executed quite well. But, it also flirts with being on both sides of cliche and outrageous.

Raymond & Ray is rated R and runs 1h 45m. It is streaming on Apple TV+